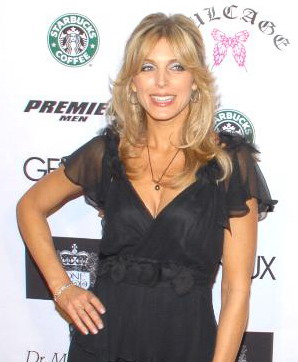 Marla Ann Maples (born October 27, 1963)[1] is an American actress and television personality. Maples was the second wife of Donald Trump, the current president of the United States. They married in 1993 and divorced in 1999.[2][3]

Marla Maples was born on October 27, 1963, in Cohutta, Georgia, United States. Her mother, Laura Ann Locklear (1940-2014), was a homemaker and model, and her father, Stanley Edward Maples, a real estate developer.[4][5] She was diagnosed with Lyme disease as a teenager.

Maples attended Northwest Whitfield High School in Tunnel Hill, Georgia, where she played basketball, served as class secretary and was crowned the 1980-1981 homecoming queen during her senior year (she returned for the 1991 homecoming to crown the school's new queen).[6][7][8]

After graduating from high school in 1981, Maples competed in beauty contests and pageants. In 1983, she won the Miss Resaca Beach Poster Girl Contest, in 1984 she was the runner-up to Miss Georgia USA, and in 1985 she won the Miss Hawaiian Tropic.[9][10]

In 1991, Maples appeared as a celebrity guest at WWE WrestleMania VII, serving as special guest timekeeper in the main event match between Hulk Hogan and defending WWF Champion Sgt. Slaughter. In that year, Maples also made a special appearance in the hit television series Designing Women as herself. In August 1992, Maples joined the cast of the Tony Award-winning Broadway musical The Will Rogers Follies as "Ziegfeld's Favorite", a role originated by Cady Huffman when the show opened in May 1991.[11][12]

In 1994, Maples appeared alongside Trump in a cameo appearance in an episode of The Fresh Prince of Bel-Air,[13] and the television series, Something Wilder, in 1994.

Since then, she appeared in Switching Lanes, directed by Thomas Mikal Ford.[17][18]

On March 8, 2016, Maples was announced as one of the celebrities who would compete on season 22 of Dancing with the Stars alongside her Switching Lanes co-star, Kim Fields.[19] She was partnered with professional dancer Tony Dovolani.[20] Maples and Dovolani were eliminated on Week 4 of competition and finished in 10th place. Maples also joined the women of ABC's morning talk show, The View, as a guest co-host on March 11, 2016.[21]

Maples hosted her own talk radio show, Awakening with Marla, on Contact Talk Radio; her guests included naturopathic doctors, authors, and astrologers.[22] Maples' album The Endless, released in August 2013, is a musical journey of spiritual awakening and transformational energy, featuring thought leaders such as the Dalai Lama, Michael Beckwith, and Deepak Chopra. Each track seeks to evoke a different level of consciousness and connection, designed for deep meditation, prayer circles, or yoga sessions. In December 2012, Maples won a "Hollywood Music in Media Award" for best New Age/Ambient song, for "House of Love", from that album.[23][24][23]

In 1990, Maples starred in an advertising campaign for No Excuses jeans.[25] In 1993, she designed a line of maternity clothes, sold in several major department stores.[26] In January 2000, a memoir by Maples, All That Glitters Is Not Gold, was announced by the ReganBooks division of HarperCollins Publishers. In February 2002, a spokeswoman for the publishing company said that "The author and publisher by mutual consent have agreed not to publish the book."[27]

Maples is committed to supporting charities and non-profit organizations and is a long-time vocal advocate of Kids Creating Peace, an organization uniting Israeli and Palestinian children.[29] She has shared proceeds of sales with those in need; she shared sales proceeds of her One World of Love album with Success for Kids, and proceeds from her auction with Linda's Stuff went to Spirituality for Kids.[30]

Maples is best known for her marriage to Donald Trump, beginning with a relationship initiated while Trump was married to first wife, Ivana. Maples met Trump in 1989 and had a highly publicized relationship[31] with at least one breakup.[32] Trump appeared on the front page of the New York Post eight days in a row[33][34], to Trump's amazement.[35] The couple had a daughter, Tiffany Ariana Trump, born on October 13, 1993.[citation needed]

The 1993 Long Island Rail Road shooting caused Trump to reevaluate his life and propose to Maples.[36] The couple married in December 1993 at New York City's Plaza Hotel in a ceremony reportedly attended by a thousand guests, including Rosie O'Donnell and O. J. Simpson.[37] In 1996, Trump fired his bodyguard after a police officer found Maples and the bodyguard together under a lifeguard stand on a deserted beach at 4 am.[38] Maples and Trump separated in May 1997[39] and divorced June 8, 1999.[27]

Maples is an advocate of health and wellness, with daughter Tiffany Trump confessing she used to make healthy homemade chocolate in Trump Tower; meanwhile her father would sneak her downstairs to the candy store to buy her Almond Joys.[40] She is a self-proclaimed 'mostly-vegan' who avoids dairy, eats organic, and chooses to be gluten free.[41][42]

Report a problem
Write to Marla Maples at FanPal • 2020