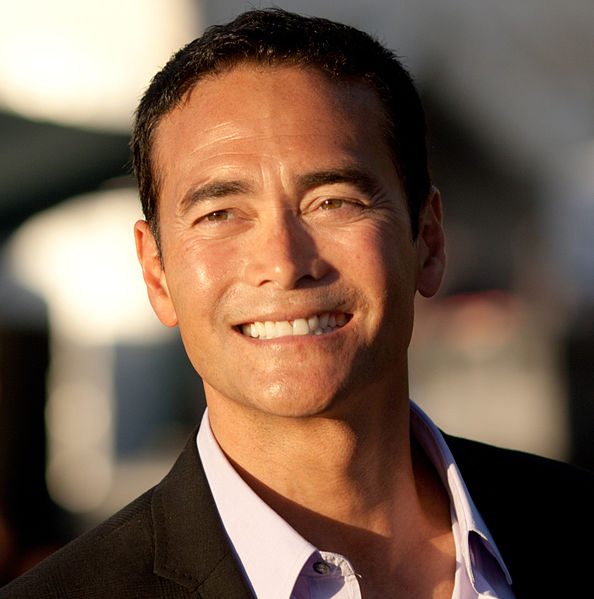 Mark Alan Dacascos (born February 26, 1964) is an American actor and martial artist.[1] He won numerous karate and various styles of kung fu championships between the ages of 7 and 18. Dacascos is perhaps best known for his roles as Mani in the French film Brotherhood of the Wolf, Toby Wong in the 1997 film Drive and Ling in the 2003 film Cradle 2 the Grave.

Beginning in January 2005, Dacascos has portrayed the Chairman on Food Network's television series Iron Chef America. This role was previously played by Takeshi Kaga in the original Japanese Iron Chef, while Dacascos' character is presented as Kaga's nephew, though the actors are not related. Some of his other roles include the recurring character of Wo Fat on the CBS series Hawaii Five-0, Kung Lao in the web series Mortal Kombat: Legacy, Eric Draven in The Crow: Stairway to Heaven, Eubulon (the Advent Master) in Kamen Rider: Dragon Knight and the title role in the film Crying Freeman.

Dacascos competed in season 9 of Dancing with the Stars.[2][3]

Dacascos' father, Al Dacascos, is from Hawaii and is a martial arts instructor of Greek, Spanish, and Han Chinese ancestry. His biological mother, Moriko McVey-Murray, is of Irish and Japanese ancestry. In the History Channel presentation "Samurai", Dacascos revealed that many members of the Japanese side of his mother's family were killed in the bombing of Hiroshima. Mark's stepmother is award-winning martial artist Malia Bernal. Dacascos attended Los Angeles Valley College and was on its 1983-1984 gymnastics team, coached by Gary Honjio. He also attended Portland State University in Portland, Oregon. Dacascos is proficient in his father's style of martial arts, Wun Hop Kuen Do. He has studied Muay Thai with Kru Puk, Capoeira with Mestre Amen Santo, and Wushu with Coaches Eric and Debbie Chen, though he self-admittedly is still very much a beginner/intermediate student in those arts.[1]
Read more...

He is married to actress Julie Condra, who starred with him in Crying Freeman. They have three children: two sons and a daughter.[4] Mark has five siblings: two brothers and three sisters.

Dacascos in a production still taken during filming of a deleted scene in Wayne Wang's film Dim Sum:A Little Bit of Heart in 1983

Dacascos became an actor after being discovered walking down the street in San Francisco's Chinatown by Chris Lee (at that time, assistant director) and Rexall Chin (hairstylist) for director Wayne Wang. Though his first scenes ended up on the cutting room floor, he went on to establish a film and television career primarily playing martial artists. He was originally set to play as the Red Ranger, Victor Lee in Bio-Man produced by Haim Saban which never got picked up but would later evolve into Mighty Morphin Power Rangers.[5]

His breakout role was in the 1993 film Only the Strong, in which he played Louis, a Capoeira master who takes a high school's potential failures and turns their lives around by teaching them the Brazilian martial art based on the West African martial art brought by slaves. In the following year, Dacascos co-starred with Party of Five's Scott Wolf as Jimmy and Billy Lee, respectively, in the movie, based on the video game, Double Dragon.

He plays the role of the Chairman of Iron Chef America and Iron Chef Australia. In the series' backstory he is the nephew of the original Iron Chef Chairman, Takeshi Kaga; the actors hold no relation in real life.

He has been featured in many action films such as Brotherhood of the Wolf, Crying Freeman and Cradle 2 the Grave, in which he squared off against Jet Li. He also performed in three video games: voice acting in Stranglehold, live acting in Wing Commander IV: The Price of Freedom and digitally recreating The Chairman in the Iron Chef America: Supreme Cuisine video game for Wii.

Dacascos was nominated for the Saturn Award for Best Supporting Actor in 2002 for his role in Brotherhood of the Wolf.[6] He also appeared in the television series The Crow: Stairway to Heaven, which was a follow-up to the 1994 film The Crow. He also appears in the children's television show, Kamen Rider: Dragon Knight, where he portrays Eubulon, also known as the Advent Master, mentor of the Kamen Riders and creator of the Advent Decks.

Dacascos plays the recurring role of Wo Fat on the CBS series, Hawaii Five-0. He portrayed Kung Lao in the second season of the YouTube series Mortal Kombat: Legacy.[7] He had a recurring role in the third season of Agents of S.H.I.E.L.D. as Mr. Giyera, an Inhuman servant of Hydra who can manipulate inanimate objects.

In August 2018, it was announced that Dacascos would star in a recurring role in the Netflix series, Wu Assassins.[8]

Dacascos (center) in a deleted scene from Dim Sum