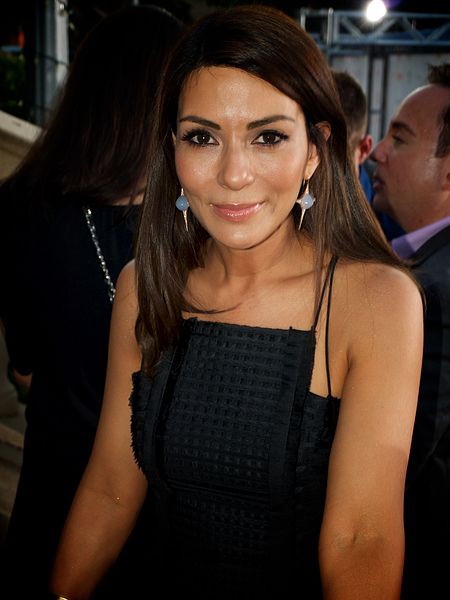 Marisol Nichols (born November 2, 1973)[1] is an American actress. She is best known for her role in the sixth season of 24 as Special Agent Nadia Yassir and as Hermione Lodge in the 2017 thriller series Riverdale.

Nichols was born in the Rogers Park neighborhood of Chicago,[2] Illinois, to a father of Hungarian and Romanian descent and a Texan mother, Maria, of Mexican ancestry.[3][4] She was raised in Naperville, Illinois. She is the oldest of three siblings, having two younger brothers. A rebellious teenager, Marisol Nichols stated in an interview with AskMen.com, "I remember being 17 and looking around at some of the people that I was hanging out with, and I had this realization that if I didn't knock this off now it would become my life", and replaced her rebellious behavior with more productive activities like acting.[5]
Read more...

Nichols at the 2017 WonderCon to promote Riverdale

In 1996, she appeared in episodes of Due South and Beverly Hills, 90210. In 1997 she made her movie debut in the film Vegas Vacation with Chevy Chase. She also had supporting roles in the films Scream 2, Friends 'Til the End, Can't Hardly Wait, Jane Austen's Mafia and The Sex Monster.

From 2000 to 2002, she played Bahraini Princess, (Sheika) Meriam Al Khalifa in the made-for-TV movie The Princess and the Marine. She also starred in the Showtime drama series Resurrection Blvd.. In 2003, she made guest appearances on episodes of Friends, CSI: Crime Scene Investigation, Law & Order: Special Victims Unit, Nip/Tuck and Charmed. Marisol's Charmed episode, "Chris-Crossed," was the show's 'highest-rated non-season-premiere episode'. In 2006, she appeared in six episodes of Cold Case and starred in the film Big Momma's House 2.

In 2010, Nichols portrayed Sarah Monahan in the short-lived supernatural crime drama The Gates, a summer series on ABC.[6]

She also was a guest star in an episode NCIS: Los Angeles in 2010, as Tracy Keller, former partner and potential romantic interest for Special Agent G. Callen (Chris O'Donnell). Nichols's character appears in the sixth episode of Season 2.[7] She also had a cameo in Kristin Chenoweth's music video for I Want Somebody (Bitch About). Nichols also portrayed "The Desert Wolf" on MTV's show Teen Wolf.

Nichols became a member of the Church of Scientology after she was introduced to it by her chiropractor.[3] She has been married to cinematographer/director Taron Lexton since April 13, 2008, and their child, Rain India Lexton, was born September 30, 2008.[9][dead link] She resides in Los Angeles, California.[10]

Nichols is an Ambassador for Operation Underground Railroad[11], an organization that seeks to end human trafficking. She has produced two celebrity human trafficking events to raise awareness for this cause.