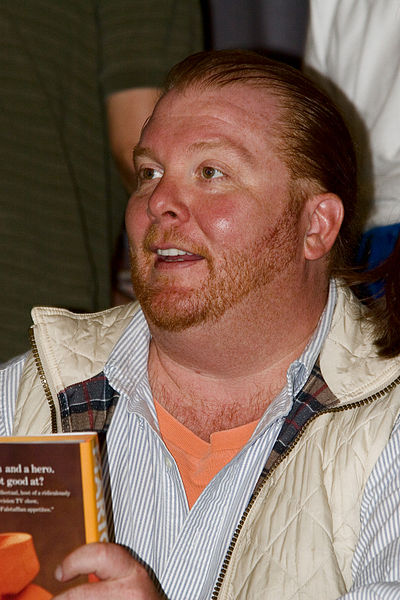 Mario Francesco Batali[1] (born September 19, 1960)[2] is an American chef, writer, restaurateur, and media personality. He is currently under investigation for sexual harassment and assault to several women that worked for him. Batali co-owns restaurants in New York City, Las Vegas, Los Angeles, Boston, Singapore,[3] Westport, Connecticut and New Haven, Connecticut.[4] Batali is also known for his appearances on the Food Network, on shows such as Molto Mario and Iron Chef America, on which he was one of the featured "Iron Chefs."

Batali was born in Seattle, Washington on September 19, 1960, to Marilyn LaFramboise and Armandino Batali.[5][1] Batali attended Rutgers University in New Brunswick, New Jersey while working as a cook at the pub/restaurant Stuff Yer Face.[6] In 1994, he married Susi Cahn.[7] He is son-in-law to Miles and Lillian Cahn, founders of Coach Inc.[8]
Read more...

At 29, Batali was a sous chef at the Four Seasons Biltmore after previously working as a sous chef for the then Four Seasons Clift Hotel San Francisco,[9] (since 1995, known as "The Clift", under changed ownership[10]). Early in his career, Batali worked with chef, Jeremiah Tower at his San Francisco restaurant, Stars.[11] Stars was open from 1984 until 1999 and is considered one of the birthplaces of the institution of the celebrity chef. Batali appeared in the Food Network show Molto Mario [12] which aired from 1996 to 2004 and made Batali a household name and popularized the Food Network.

In 2012, a lawsuit was settled by Batali (and B&B) with 117 members of the restaurant staff,[16] who alleged that the Batali organization had skimmed a percentage of the tip pools in his restaurants over a period of years.[17]

Batali is a critic of hydraulic fracturing, commonly known as fracking, a method of natural gas extraction. He has signed onto the cause of Chefs for the Marcellus, whose mission is to "protect regional foodshed from the dangers of hydraulic fracturing for natural gas (fracking)."[18][19] In May 2013, Batali co-wrote an opinion article with chef Bill Telepan for the New York Daily News, in which the two wrote that "Fracking ... could do serious damage to agricultural industry and hurt businesses, like ours, that rely on safe, healthy, locally sourced foods."[20]Batali was the subject of a 2007 book titled "Heat" by Bill Buford which detailed his philosophy to various aspects of social activism as well as cooking and life.

Batali served as an ambassador and on the board of directors for The Lunchbox Fund, a non-profit organization which provides a daily meal to students of township schools in Soweto, South Africa. As of December 2017, Batali released in response to the sexual misconduct allegations, he would step down from his role with this organization.[21]

He supports the practice of Transcendental Meditation through the David Lynch Foundation.[22][23]

In a 2012 interview, Batali said that good Italian cooking was characterized by simplicity, an insight he attributed to his time working at a restaurant in Borgo Capanne, Italy.[24]

On December 11, 2017, Eater, the restaurant news website, made public the accusations of four women who accused Batali of sexual harassment and sexual misconduct.[25][15][26] By the following day, four more women had come forward.[27] Batali took a leave of absence from his position at the management company Batali & Bastianich Hospitality Group.[21][28] Producers of ABC's The Chew asked him to step aside temporarily, while his fellow co-hosts publicly addressed the allegations on air,[15][29] and he was fired from the show on December 14, 2017.[30]

Food Network halted plans to release episodes of his television show Molto Mario after the allegations.[31] Target announced it pulled Batali's pasta sauces and cookbooks out of sales.[32][33]

In May 2018, more accusations of sexual misconduct against Batali were aired on an episode of 60 Minutes, and the New York Police Department confirmed it was investigating Batali.[34] Batali denied an allegation of sexual assault, but said "My past behavior has been deeply inappropriate and I am sincerely remorseful for my actions."[34] Days later, Batali's company B&B Hospitality Group announced it would be closing its three Las Vegas Strip restaurants after the Las Vegas Sands Corp. terminated the companies' relationship.[35]