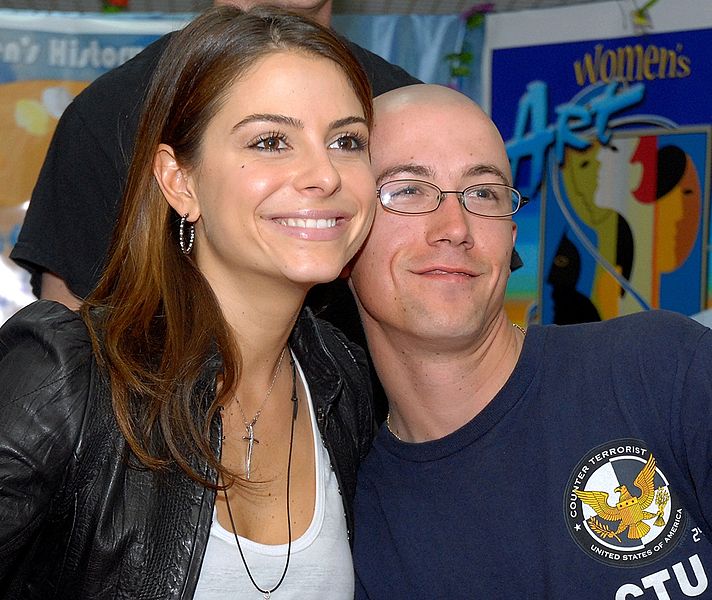 Maria Menounos (/məˈnuːnoʊs/; born June 8, 1978)[2] is an American actress, journalist, television host and occasional professional wrestler. She is currently signed to WWE where she has served as an ambassador since 2013. She has made television appearances in the U.S. as a TV correspondent for Today, Access Hollywood, Extra, and abroad for co-hosting the Eurovision Song Contest 2006 in Athens, Greece. She also co-created and is currently CEO of online podcast series network AfterBuzz TV.

Menounos was born in Medford, Massachusetts,[2] the daughter of Greek parents Costas and Litsa Menounos, who worked as janitors in a Boston nightclub.[3] She has a younger brother named Peter.[3] Menounos attended the Dormition of the Virgin Mary Greek Orthodox Church in Somerville, Massachusetts. She also attended Medford High School in Medford.

In 1995, Menounos began to compete in beauty pageants. The following year, she won the title of Miss Massachusetts Teen USA, and she competed at Miss Teen USA where she placed in the top 15, receiving an honorary mention, during the preliminary competition. Menounos placed 13th in preliminaries. She competed for the title of Miss Massachusetts USA 2000, and was the first runner-up.

Menounos attended Boston's Emerson College, where she participated in the organization Emerson Independent Video. She graduated from Emerson in 2000.[1]

During her senior year at Emerson, Menounos worked as a reporter for Channel One News. For her 10-minute segments, she traveled to El Salvador to report on the 2001 El Salvador earthquakes, interviewed NATO aircrew members aboard an E-3 AWACS plane during the military alliance's Operation Eagle Assist, and interviewed President George W. Bush.[citation needed]

Entertainment Tonight hired Menounos as a correspondent in 2002, where she reported on movies, music, and fashion.[citation needed] She left the program in 2005 to focus on her acting career, though she would join rival program Access Hollywood that fall as a correspondent.[4] She went on to co-host a few episodes of the Today show in the late summer and fall of 2006 as well as in April 2007. In 2003, Menounos appeared on the November 30 episode of Punk'd where she was one of many celebrities caught in the awkward and embarrassing "Red Carpet Interviews".

In 2004, Menounos appeared in an episode of the UPN series One on One as Glenda, an eccentric, self-proclaimed "Fairy Godmother to the Stars". In the summer of 2005, she appeared in the comic book film Fantastic Four, where she played a nurse who is romanced by the Human Torch, played by Chris Evans. Her likeness and voice was featured in the 2005 Electronic Arts video game James Bond 007: From Russia with Love as Eva Adara, Red Grant's henchwoman, which stars Sean Connery as James Bond. She is also the spokesperson for Pantene hair products. Menounos presented the 2006 Eurovision Song Contest (along with Greek singer Sakis Rouvas) which took place in Athens.[5] Menounos also directed Longtime Listener starring Wilmer Valderrama. The film was an official selection of the Tribeca Film Festival 2006. Menounos acted in and produced Adventures of Serial Buddies, which is credited with being the first serial killer buddy comedy.[6]

At the age of 17, Menounos produced In the Land of Merry Misfits, an independent film fairy tale. The 35 mm feature film was produced by Menounos while attending Emerson College with director Keven Undergaro, then head writer for MTV's Singled Out. The negative of the film was stolen and the film was never completed but her work on the film, and the film's director, helped her land her reporting job at Channel One News and at MTV (ET on MTV). Menounos, however, never forgot the film or the film's director. In 2005, Menounos personally funded the recovery and restoration of the film, which was narrated by John Waters and starred an eclectic group in the Waters vein — including former WWE champion Bob Backlund, actress Josie Davis from the TV show Charles in Charge and B-movie icon Randal Malone. The film premiered at the 2007 Tribeca Film Festival.

Menounos also maintains AfterBuzzTV, an online entertainment network she founded with Undergaro,[7] for which she was named the 2014 CES Entertainment Matters Ambassador.[8]

As an actress, Menounos had recurring roles on the CBS-TV program Without a Trace and as Jules in the second season of The CW's One Tree Hill (during its run on The WB). Menounos also appeared on the Scrubs episode "My Extra Mile", which aired in May 2006 where she is attracted to John Dorian because she likes his hair. In 2006, Menounos appeared in the music video for "A Public Affair" by Jessica Simpson. On April 27, 2007, Menounos starred in Kickin' It Old Skool. In 2007, Menounos continued in her run as international spokesperson doing print and television commercials for Pantene hair products as well as print ads for New York & Company. From December 17 to 20, 2007, Menounos hosted the reality game show miniseries Clash of the Choirs.

In 2008, she became the host of Hollywood Green on the Planet Green network. In 2008, she had a role in the movie Tropic Thunder, and in the same year became the first (and to date the only) journalist to interview the entire Obama family as a whole. She also reported for NBC Nightly News.

In May 2008, she played in the AVP Cuervo Gold Crown Huntington Beach Open, but was eliminated in the qualifying round. On July 13, 2008, Menounos starred in the celebrity softball game at Yankee Stadium in New York. In November 2008, when Richard Belzer fell ill, she filled in as host for the North Shore Animal League's Dogcatemy Celebrity Gala, which takes place at NYC's Capitale.[9] From 2009 to 2012, she hosted various reunion specials of MTV's The Real World and The Challenge. Menounos appeared on the 2008 Knight Rider series episode "Fly By Knight", which aired on February 11, 2009 where she played a DEA agent who is in charge of investigating a plane crash.

On August 4, 2011, it was announced that she would join Warner Bros.'s Extra, where she co-hosted the show with Mario Lopez. She also had on-air duties at Dr. Drew's Lifechangers, with plans to develop new projects.[10] For her work on Extra, Menounos won a Daytime Emmy Award for Outstanding Entertainment News Program.

She was a contestant on the 14th season of Dancing with the Stars partnering with Derek Hough.[11] The couple was eliminated on May 15, 2012, ending up in fourth place. In May 2013, Menounos launched a new interview series called Conversations with Maria Menounos,[12] with Zoe Saldana being her first guest.

In May 2014, after three years of hosting Extra, Menounos left the show and signed a multi-year contract with E! Entertainment to host and produce several programs. In July 2015, The Hollywood Reporter announced that Menounos would replace Giuliana Rancic as the co-anchor of E! News.[14] In July 2017, Menounos stepped down, due to an ongoing battle with a brain tumor.[15][16][17]

In late 2015, it was announced that she would host a daily, one-hour radio show on SiriusXM called Conversations with Maria on Stars 109.[18]

Menounos is a long-time WWE fan and has made several appearances with the promotion. Menounos' first appearance came on October 12, 2009, when Menounos joined Nancy O'Dell in guest hosting WWE Raw. She made her in-ring debut that night in a six diva tag team match with Gail Kim and Kelly Kelly against Alicia Fox, Beth Phoenix, and Rosa Mendes; Menounos' team was victorious, with the match highlighted by Menounos slapping the much larger-statured Phoenix.[19]

On December 11, 2011, at WWE Tribute to the Troops, Menounos returned and teamed with Alicia Fox, Eve Torres, and Kelly Kelly to defeat the team of The Bella Twins (Brie and Nikki) and The Divas of Doom (Phoenix and Natalya) where Menounos got the win for her team by pinning Phoenix.[20]

Menounos continued her feud with WWE Divas Champion Phoenix after Phoenix and Eve Torres interrupted an interview segment with Kelly Kelly on Extra. This led to tag team match at WrestleMania XXVIII with Menounos teaming with Kelly Kelly to take on Phoenix and Torres.[21] Despite legitimately suffering two cracked ribs during practice for Dancing with the Stars before the match,[22] Menounos and Kelly were successful in defeating Phoenix and Torres on April 1, 2012, at WrestleMania, with Menounos pinning Phoenix for the win.[23]

On August 17, 2014, Menounos was seen at the SummerSlam pay-per-view, appearing in the crowd and later in a backstage segment with Stephanie McMahon, who accepted Menounos's challenge for the ALS Ice Bucket Challenge. Menounos was actually nominated in the first place by McMahon's father and chairman of WWE, Vince McMahon.

She has hosted the WWE Hall of Fame red carpet pre-show for four years in a row (2014-2017). She also appeared during the event as a guest backstage interviewer for WrestleMania 31, WrestleMania 32 and WrestleMania 33. In 2016, Menounos appeared in one episode of the WWE Network's Swerved and was a backstage interviewer for SummerSlam. On January 28, 2018, she served as the special guest ring announcer for the first-ever women's Royal Rumble match at the Royal Rumble.

Menounos appeared in FHM magazine and in People magazine in 2004 as one of the "50 Most Beautiful People".[27]

She has also beaten Jessica Alba and Charlize Theron for "Cyber Vixen of the Year" on Spike TV's video game awards.[28] On August 8, 2010 she won the Madden NFL Pro-AM MVP award.[29]

In 2014, she won a Daytime Emmy award for Outstanding Entertainment News Program for her work on Extra.[30]

Menounos founded the charity "Take Action Hollywood!" after her trip to South Africa, where she reported on the effects of the AIDS crisis there.[31] She also created the Cosmo Girl Cup, a national, annual competition and award given to the group of teens who do the most in their communities to affect for positive social change.[32] Menounos presented at the Earth Day Network's Climate Rally in Washington, DC on April 25, 2010.[33]

Menounos has been in a relationship with director and producer Keven Undergaro since April 1998.[34] On March 9, 2016, Undergaro proposed to her live on The Howard Stern Show, and Menounos accepted.[35] In addition, they own the online entertainment network AfterBuzz TV where she is CEO and an executive producer.[7][36] In June 2017, she underwent surgery for meningioma, a benign intracranial tumor.[37] On December 31, 2017, Menounos married Undergaro in Times Square during its New Year's festivities, in a ceremony officiated by Steve Harvey and broadcast during Fox's New Year's Eve with Steve Harvey.[38] On 6 October 2018 the couple had an Orthodox wedding in Akovos.