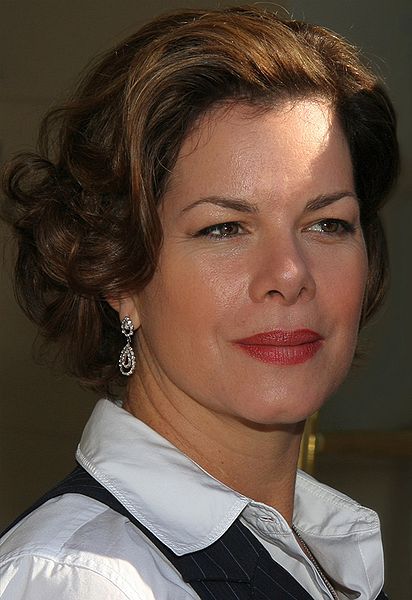 Marcia Gay Harden (born August 14, 1959)[1] is an American actress. Her film breakthrough was in the 1990 Coen brothers-directed Miller's Crossing. She followed this with roles in films including Used People (1992), The First Wives Club (1996), and Flubber (1997). For her performance as artist Lee Krasner in the 2000 film Pollock, she won the Academy Award for Best Supporting Actress. She earned another Academy Award nomination for her performance as Celeste Boyle in Mystic River (2003). Other notable film roles include American Gun (2005), and 2007's The Mist and Into the Wild.

Harden made her Broadway debut in 1993, starring in Angels in America, for which she was nominated for a Tony Award. She returned to Broadway in 2009 as Veronica in God of Carnage. Her performance won her the Tony Award for Best Actress in a Play.

Harden was nominated for her second Primetime Emmy Award for her performance in the 2009 television film The Courageous Heart of Irena Sendler. Harden's other notable television roles include Dr Leanne Rorish in the CBS medical drama Code Black and attorney Rebecca Halliday in the HBO Aaron Sorkin series The Newsroom.

Harden was born in La Jolla, California, the daughter of Texas natives Beverly Harden (née Bushfield), a housewife, and Thad Harold Harden (1932-2002), who was an officer in the United States Navy.[2] She is one of five children, three sisters and a brother. Harden's brother is named Thaddeus, as is her former husband. Harden's family frequently moved because of her father's job, living in Japan, Germany, Greece, California, and Maryland.[3]

In 1976, Harden graduated from Surrattsville High School in Clinton, Maryland. In 1980, she received a BA in theatre from the University of Texas at Austin. In 1988, Harden received a Master of Fine Arts from New York University's Tisch School of the Arts.[4]

Harden's first film role was in a 1979 student-produced movie at the University of Texas. Throughout the 1980s, she appeared in several television programs, including Simon & Simon, Kojak, and CBS Summer Playhouse. She appeared in The Imagemaker (1986), her first movie screen role, in which she played a stage manager. She appeared in the Coen brothers' Miller's Crossing (1990), a 1930s mobster drama in which she first gained wide exposure. Even so, at the time, living in New York City, she had to go back to doing catering jobs "because I didn't have any money".[5]

In 1992, Harden played actress Ava Gardner alongside Philip Casnoff as Frank Sinatra in the made for TV miniseries Sinatra. Throughout the 1990s, she continued to appear in films and television. Notable film roles include the Disney sci-fi comedy Flubber (1997), a popular hit in which she co-starred with Robin Williams; the supernatural drama Meet Joe Black (1998), playing the under-appreciated daughter of a tycoon (Anthony Hopkins, co-starring Brad Pitt); Labor of Love (1998), a Lifetime television movie in which she starred with David Marshall Grant; and Space Cowboys (2000), an all-star adventure-drama about aging astronauts.

Harden was awarded the 2000 Academy Award for Best Supporting Actress for her portrayal of painter Lee Krasner in Pollock (2000). In 2003, she was again nominated in the same category for Mystic River.

Harden guest-starred as FBI undercover agent Dana Lewis posing as a white-supremacist in "Raw", an episode of the popular crime drama Law & Order: Special Victims Unit. In 2007, this role earned Harden her first Emmy Award nomination for best guest actress in a drama series. She reprised the role in the series' eighth-season premiere and again in the twelfth-season episode "Penetration" as a rape victim (aired November 10, 2010).

In 2007, Harden appeared in several films, including Sean Penn's Into the Wild and Frank Darabont's The Mist (opposite Thomas Jane and Laurie Holden), based on the novella by Stephen King. Also in 2007, she shared top billing with Kevin Bacon in Rails & Ties, the directorial debut of Alison Eastwood. In 2008, Harden appeared in Home playing a woman who has had a mastectomy. (Her character in Rails & Ties also had a mastectomy.) One central scene called for her to bare her breasts, with the missing breast "removed" using computer-generated imagery. In Home, her co-stars include her daughter, Eulala Scheel. Harden starred in the Christmas Cottage, a story of the early artistic beginnings of the Painter of Light, Thomas Kinkade.

In 2009, she appeared as a regular on the FX series Damages as a shrewd corporate attorney opposite Glenn Close and William Hurt. Harden received a 2009 Emmy nomination for her role in The Courageous Heart of Irena Sendler, a TV film also starring Oscar-winner Anna Paquin. She was a Best Supporting Actress in a TV Movie/Miniseries nominee and lost to Shohreh Aghdashloo. If she had won this Emmy, Harden would have entered the elite group of "triple-crown" actors; those who have won the profession's three highest honors: the Academy Award (film), the Tony Award (stage), and the Emmy Award (television).

In 2009, Harden co-starred with Ellen Page and Drew Barrymore in Whip It, which proved a critical success.[6] Harden also played in the comedy The Maiden Heist (2009) with Christopher Walken and Morgan Freeman.

In 2013, Harden reunited with her former Broadway co-star Jeff Daniels as a new cast member on HBO's series The Newsroom.[5] From 2015 to 2018, she played Christian Grey's mother, Grace Trevelyan Grey, in the Fifty Shades film series. Also in 2015, she began a starring role in the TV series Code Black.

In 1993, Harden debuted on Broadway in the role of Harper Pitt (and others) in Tony Kushner's Angels in America. The role earned her critical acclaim, and she received a Tony Award nomination (Best Featured Actress in a Play). The winner in that category was Debra Monk in Redwood Curtain.

In 2009, Harden returned to Broadway in Yasmina Reza's God of Carnage, where she co-starred with James Gandolfini, Hope Davis, and Jeff Daniels.[7] All three actors were nominated for the Tony Award, and on June 8, Harden won Best Actress in a Play.[8]

Harden married Thaddaeus Scheel, a prop master,[5] with whom she worked on The Spitfire Grill in 1996. Harden and Scheel have three children: a daughter, Eulala Grace Scheel (born September 1998), and twins Julitta Dee Scheel and Hudson Scheel Harden (born April 22, 2004).[9] In February 2012, Harden filed for divorce from Scheel.[10]

Harden is an avid potter, which she learned in high school, and then took up again while acting in Angels in America.[15][11]

Harden is a practitioner of ikebana, the art of Japanese flower arrangement, which her mother learned while they lived in Japan.[16] She gave a brief demonstration in 2007 at The Martha Stewart Show and presented some works of her family as well.[17] In May 2018, a memoir called The Seasons of My Mother: A Memoir of Love, Family, and Flowers was published. The book details the story and bond of mother and daughter throughout time and how they are dealing with the largest struggle yet, her mother's Alzheimer's disease. Harden created works of ikebana specifically for this book to illustrate the different seasons of her mother's life.[18][15]

In 2002, she received the Excellence in Acting award at the Provincetown International Film Festival.