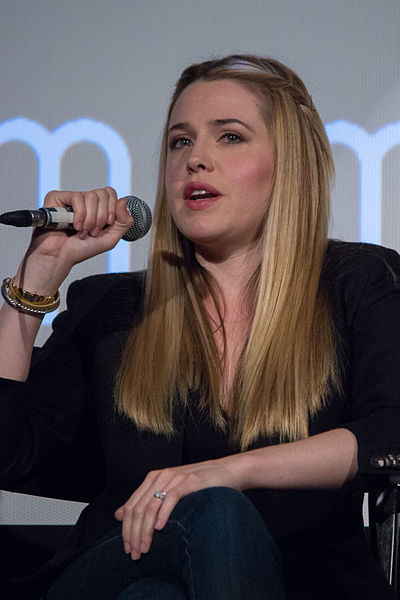 Majandra Delfino (born February 20, 1981) is an American actress and singer. An Alma Award-winner, she is best known for her role as Maria DeLuca on Roswell, and as Andi on the CBS multi-cam Friends With Better Lives.

Delfino was born on February 20, 1981 in Caracas, Venezuela. Her father is Italian Venezuelan and her mother is Cuban.[1] As a child, she lived in Caracas and Miami, Florida, until moving to Los Angeles as a teenager.[2]
Read more...

Delfino was cast in MGM's "Zeus & Roxanne" before landing the role of Tina Dimeo in NBC's "The Tony Danza Show" where she played Tony Danza's teenage daughter. After playing Natalie Sanford in the independent film "The Secret Life of Girls" Delfino was cast as Maria DeLuca on Roswell. On hiatus she performed in the small role of Vanessa in Traffic as well as Natalie in The Secret Life of Girls. She also acted in Reeseville, Celeste in the City, and in R.S.V.P.. She played Trudi in the film State's Evidence, which covers the topic of violence in schools.

Delfino starred in a number of episodes of the NBC show Quarterlife, also shown on MySpaceTV, which started airing November 11, 2007. As of June 2011, she was starring with Raven-Symoné in the show State of Georgia on the ABC Family channel until its cancellation.

Delfino performed in ABC's pilot The Family Trap starring Mandy Moore and Stockard Channing. Delfino was eight months pregnant with her first child during shooting, so director Shawn Levy shot around the pregnancy for the entire project. One month after giving birth, Delfino was cast as Dwight Schrute's sister on NBC's The Office attempted spin-off/backdoor pilot, "The Farm". NBC did not greenlight the series.

Delfino last starred in CBS's "Friends With Better Lives" where they wrote her second pregnancy into the story line.

Delfino sang in several Roswell episodes, such as "Viva Las Vegas", "Cry Your Name", and "Behind the Music". In the summer of 2000, Delfino released three songs onto the internet, "Siren", "Bruises" and "Tattoo", and wrote and produced them in association with "Sci-Fi Lullaby". On October 31, 2001, Delfino released the EP The Sicks on her own label, Dripfeed, without radio or television airplay.

Her second album, Tarte, was released on April 23, 2007, by her own record company, Red Velvet Cake Records, through her Web site www.majandra.com and can now be purchased through iTunes along with The Sicks. In February 2011, the singer announced, through her Twitter, that she is working on her third studio album, scheduled for a late 2018 release.[3]