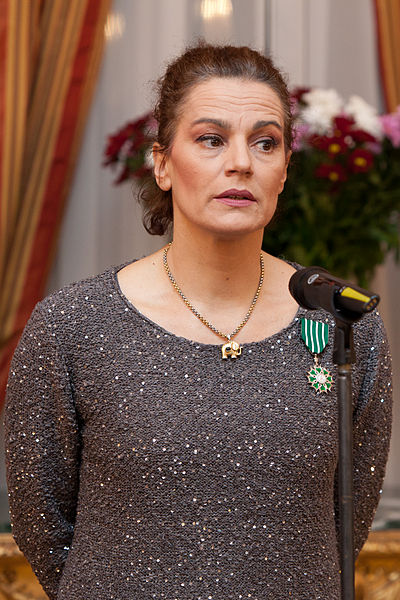 Maia Emilia Ninel Morgenstern (born 1 May 1962) is a Romanian film and stage actress,[1] described by Florin Mitu of AMOS News as "a symbol of Romanian theater and film".[2] In the English-speaking world, she is probably best known for the role of Mary, mother of Jesus, in Mel Gibson's The Passion of the Christ. In Romania, she has been nationally known since her 1992 role as Nela in Balanța, a film known in the United States as The Oak, set during the waning days of Communist Romania.[1]

Born in Bucharest, in a Jewish family,[1] she graduated from the Film and Theatre Academy of Bucharest in 1985. She then played at Teatrul Tineretului (Youth Theater) in Piatra Neamț until 1988, and at the Teatrul Evreiesc de Stat (State Jewish Theatre) in Bucharest 1988-1990. From 1990-1998 she was a member of the company of the National Theatre in Bucharest, and since 1998 of Teatrul Bulandra, also in Bucharest;[3] in addition, she continues to act at the Jewish State Theatre and other Bucharest theaters[1] and elsewhere in Romania.[3] Among her notable stage roles in recent years, in a Romanian-language production of The Blue Angel (Îngerul Albastru in Romanian) at Bucharest's Odeon Theater, in 2001-2 she played (to great critical acclaim) Lola Lola, the character made famous by Marlene Dietrich. At the same time, she was also playing the role of Kathleen Hogan in a Romanian-language production of Israel Horovitz's Park Your Car in Harvard Yard at the State Jewish Theater.[1]

Morgenstern has appeared in numerous films, primarily in Romanian language roles. In The Passion of the Christ, she performs a role in Aramaic, but like the other actors in the cast of that film, she simply memorized her lines phonetically.[4]

Her surname, Morgenstern, means "Morning Star" in German, a title of the Virgin Mary, the character she played in The Passion of the Christ. Mel Gibson, a devout Traditionalist Catholic, thought this of great significance when casting her.[5] In interviews, she has defended The Passion against allegations of antisemitism,[6] saying that the high priest Caiaphas is portrayed not as a representative of the Jewish people, but as a leader of the establishment, adding that "Authorities throughout history have persecuted individuals with revolutionary ideas."[7]

She has been married twice, and has 3 children: Tudor Aaron, Eva Leea Cabiria and Ana Isadora.[8]

She has won several major awards as an actress:

Where translations of titles are italicized, it indicates use of the translated title for the film in English-language release.