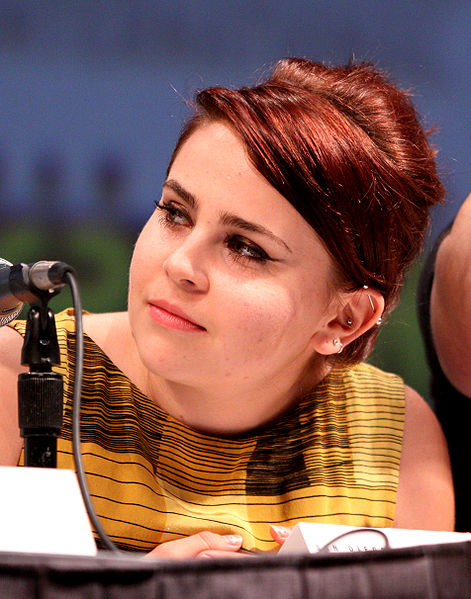 Whitman has also lent her voice to several animated films and television series, including as Rose/Huntsgirl in American Dragon: Jake Long, Shanti in The Jungle Book 2, Katara in Avatar: The Last Airbender, Tinker Bell in the Disney Fairies franchise, Little Suzy in Johnny Bravo, April O'Neil in the 2012 generation of Teenage Mutant Ninja Turtles, and Yuffie Kisaragi in the video game Kingdom Hearts II.

Whitman was born in Los Angeles, California, the only child of Pat Musick, a voice artist, and Jeffrey Whitman, a personal manager and set construction co-ordinator.[2] She attended Ribet Academy.[3][4] Whitman is of English and German ancestry.
Read more...

She started her career with a voice-over for a Tyson Chicken commercial at the age of two.[5] Acting coach Andrew Magarian helped her memorize lines as she could not read.[6]

In 1994, at the age of six, Whitman made her film debut, acting alongside Meg Ryan in When a Man Loves a Woman (1994), playing Ryan's youngest daughter, Casey Green.[7] She beat 700 other girls who were interested in the part.[3] In 1996, Whitman appeared in two films: Independence Day as the President's daughter;[8] and One Fine Day playing George Clooney's daughter, Maggie Taylor.[9] The same year, Whitman guest starred in the season three episode of Friends, "The One Where Rachel Quits".[10] In 1998, she was Sandra Bullock's daughter, Bernice Pruitt, in Hope Floats.[11]

During several guest appearances from 1998 until 2001, Whitman played the role of Chloe Madison on JAG. In 2001 and 2002, Whitman starred in the Fox Family series State of Grace in which she portrayed Grace, a girl from a Catholic background who befriends Hannah, a Jewish girl (Alia Shawkat).[12][13]

2004-2008: Arrested Development and other television roles

Whitman at the 2010 San Diego Comic-Con

From 2004 to 2006, Whitman had a recurring role on Arrested Development, reuniting with Shawkat. Whitman appeared in the 2006 series Thief for FX Networks, playing the stepdaughter of Nick Atwater (Andre Braugher).[14] Whitman made several high-profile guest appearances in 2006 and 2007. She also appeared on Desperate Housewives in the episode "Nice She Ain't" as Sarah, an unscrupulous friend of Julie Mayer (Andrea Bowen). Whitman also had a recurring role on Chicago Hope, (1994-2000), playing the daughter of "Dr. Kate Austin," (played by Christine Lahti), in the series' later years.

Whitman was initially cast in the 2007 series remake of The Bionic Woman, playing the deaf younger sister of the title character. On June 27, 2007, TV Guide reported that Whitman was being replaced in the role of Jaime's sister, and Lucy Hale was cast as Whitman's replacement the following July.[15] An NBC spokesperson confirmed this, stating, "The decision was purely creatively driven. It is very common to change storylines, characters, actors after the initial pilot is shot." The sister character's hearing was restored after this recasting at the request of an NBC executive.[15] The series' unaired pilot episode has been released on DVD on April 7, 2008.[16] She also appeared in the season nine episode "Streetwise" of Law and Order: Special Victims Unit, as an on-the-street-mother who adopts street children forming a homeless family.

Whitman gave voice to Katara of the Water Tribe in the animated show Avatar: The Last Airbender, and previously Rose in American Dragon: Jake Long. She has appeared in the HBO series In Treatment as Rosie. She plays Cynder in The Legend of Spyro: The Eternal Night. Whitman voiced the character Tinker Bell in the 2008, 2009 and 2010 Disney Tinker Bell films.[17] As part of a deal to promote the production of the first Tinker Bell film, the UK's speaking clock started to use her voice at 0100GMT on October 26, 2008.[18]

Whitman at the Paleyfest 2013

In 2009, Whitman landed a regular role in NBC's version of the Ron Howard classic Parenthood,[19] which premiered in 2010. She played Amber Holt, "a rebellious and willful teen whose only interest at present is her wannabe rock star boyfriend".[20] Whitman played evil ex Roxy Richter in Edgar Wright's Scott Pilgrim vs. the World, a film adaptation of the Bryan Lee O'Malley indie comic series Scott Pilgrim. The film starred her former Arrested Development co-star, Michael Cera, in the title role.[21][22] Whitman appeared on Family Guy in 2010.

She had a large role in the 2012 film The Perks of Being a Wallflower, opposite Logan Lerman, Emma Watson, and Ezra Miller.[23] In 2013, she reprised her role as Ann Veal in Arrested Development's season four, six years after the series was canceled.[24] She appeared alongside Darren Criss in three episodes of season three of Lisa Kudrow's Web Therapy, playing his girlfriend.[25] In 2015, Whitman played the lead role in the comedy The DUFF. She started filming Operator alongside Martin Starr in June of that year.[26] According to co-writer and director Roland Emmerich, Whitman did not reprise her role as the President's daughter in Independence Day: Resurgence, the sequel to the 1996 blockbuster hit Independence Day, because she did not want to read for the part.[27]

Whitman has expressed her feelings on being typecast as an outsider in various roles in television and movies. She has talked about being a child actor and her relatable experiences such as being bullied in high school for being "weird."[28] In an interview with Bello Mag, Whitman explains that the entertainment industry constantly tells actors what they are "not" and felt her choosing of these roles was her "trying to communicate to everyone" who may go through similar situations, that it's okay to be who they are.[29] One of Whitman's more notable quotes is, "People should recognize who you are and how you can act rather than how famous you are." [30]

Whitman has recorded "I Heard The Bells On Christmas Day" and "You Make Christmas Feel So Good" for School's Out! Christmas,[31] and has sung guest vocals on a number of tracks from indie-punk band Fake Problems' newest album Real Ghosts Caught on Tape.[32] Whitman has also been featured on her show Parenthood in the song "Gardenia" on the season two episode "The Booth Job" along with Landon Pigg.[33][34]

Whitman appears in the music videos for "I Was a Fool" and "Boyfriend" by Tegan and Sara.[35] She performed a small speaking part in the rapper DVS' record "Charlie Chaplin" where she plays the part of what DVS sees as the stereotypical hipster expressing distaste with music and television to appear special.[36]