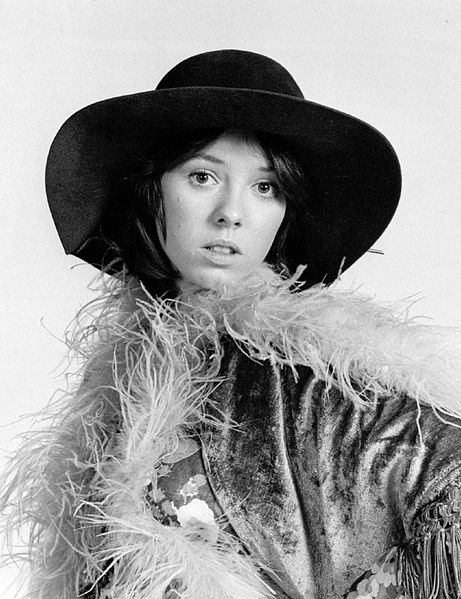 Laura Mackenzie Phillips (born November 10, 1959) is an American actress and singer best known for her roles in American Graffiti, as rebellious teenager Julie Mora Cooper Horvath on the sitcom One Day at a Time, and for the Disney Channel science fiction show So Weird.[1]

Born in Alexandria, Virginia, she is the daughter of John Phillips, singer in The Mamas & the Papas, and his first wife, Susan Adams. She is the sister of Jeffrey Phillips and a half-sister of Tamerlane Phillips, actress Bijou Phillips, and singer Chynna Phillips.

Phillips attended Highland Hall Waldorf School in Northridge, California.[2] At age 12, Phillips formed a band with three of her classmates and was spotted by a casting agent during one of their performances.[3] She was given an audition for a role in the 1973 hit film American Graffiti, which she won.

Phillips was 12 years old during the filming of American Graffiti, and 13 when the movie was released. She was cast as Carol Morrison, a young girl accidentally picked up by hot rodding teenager John Milner (Paul Le Mat). Because of California state law, producer Gary Kurtz became Phillips' legal guardian for the duration of the filming.[4]

Mackenzie Phillips in 1975. She is seen here alongside fellow cast members Bonnie Franklin and Valerie Bertinelli

Phillips gained stardom in the 1970s, when she played boy-crazy teenager Julie Cooper (when the character got married, her married name was Horvath) on the long-running television show One Day at a Time, for which she earned $50,000 (equal to $227,396 today) a week.[3] During the show's third season in 1977, Phillips was arrested for disorderly conduct. Because of her drug and alcohol abuse, Phillips began arriving late and was even incoherent for rehearsals. The producers ordered her to take a six-week break to overcome her addiction but were ultimately forced to fire her in 1980.[3]

After two near-fatal overdoses, Phillips voluntarily entered Fair Oaks Hospital to undergo treatment. After she completed treatment in 1981, the producers of One Day at a Time invited her back to the show.[3] However, in 1982, Phillips resumed her cocaine use and the following year, she collapsed on the show's set. When she refused to take a drug test, she was fired again, this time for good. Her character was written out of the series. In 1992, she entered a long-term drug rehabilitation program and underwent intensive treatment for nine months.[3]

From the mid 1980s to the early 1990s, Phillips performed with a re-formed version of The Mamas & the Papas, known as The New Mamas and The Papas.

In 1999, Phillips co-starred with Cara DeLizia in the Disney Channel series So Weird, playing a fictional rock star named Molly Phillips. She sang original songs written by show producers Jon Cooksey and Ann Marie Montade. In 2002, she appeared in the Disney Channel original movie Double Teamed. Phillips guest-starred on episodes of ER, Without a Trace, 7th Heaven, and Cold Case.

Phillips won an Honorary Best Actress award on March 20, 2011, at the closing night awards gala of the Female Eye Film Festival in Toronto, Ontario, Canada, for her performance as Sharon in the 2010 independent film Peach Plum Pear. While in Toronto, she was interviewed on Canada Am, ET Canada, and The Marilyn Denis Show .[5]

She currently works at the Breathe Life Healing Center in West Hollywood, California, as a drug rehab counselor.[6]

In 2017, Phillips appeared in an episode of the rebooted One Day at a Time, featured as Pam Valentine. The role was apt, given Phillips' history: she portrayed a counselor.

In 2018, Phillips appeared as Barbara Denning in multiple episodes of Netflix original Orange is the New Black.

Phillips has been married three times: first to rock group manager Jeffrey Sessler, son of Freddie Sessler (from 1979 to 1981); then to rock guitarist Michael Barakan - now known professionally as Shane Fontayne (1986-2000). She has one child, son Shane Barakan (born 1987), a musician. Her third marriage was in June 2005 to Keith Levenson.

Phillips has had a lifetime troubled by drug abuse. On August 27, 2008, she was arrested by the Los Angeles Airport Police on charges of possession of cocaine and heroin after she went through airport security screening.[7] On October 31, 2008, she pleaded guilty to one felony count of cocaine possession, and was sentenced to a drug rehabilitation program.[8] Phillips' drug case was dismissed after she successfully completed a drug diversion program.[9]

She appeared on the third season of Celebrity Rehab, which aired in January and February 2010. She later discussed her recovery on the March 17, 2010, episode of The View.[10]

In September 2009, Phillips's memoir High on Arrival was released, after which she appeared on The Oprah Winfrey Show for an hour-long interview. She told Winfrey that she first tried cocaine when she was 11 years old, and that her father had taken drugs with her, and had also injected her with cocaine.

During the interview, Phillips read excerpts from her book. She said that at the age of 19, on the night before her first wedding, "I woke up that night from a blackout to find myself having sex with my own father", and that when she confronted her father months later,[11] asking why he had raped her, her father simply replied, "Raped you? Don't you mean we made love?"[12]

Phillips told Oprah Winfrey of having a consensual sexual relationship with her father,[13] describing her participation as "sort of Stockholm Syndrome, where you begin to love your captor."[14]

Geneviève Waïte, who was John's wife at the time MacKenzie claimed the incest first began, denies the allegations, saying they were inconsistent with his character. Michelle Phillips, John's second wife, also stated that she had "every reason to believe untrue."[15]

However, Chynna Phillips, Mackenzie's half-sister and Michelle Phillips' daughter, stated that she believed Mackenzie's claims and that Mackenzie first told her about the relationship during a phone conversation in 1997, approximately 11 years after the supposed relationship had ended.[16]