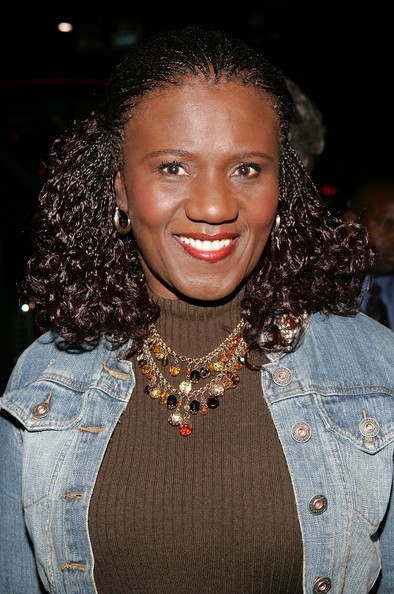 Mablean Deloris Ephriam, Esq. (born April 23, 1949) is a former Los Angeles prosecuting attorney.[1] She is best known as the adjudicator of the courtroom series Divorce Court for seven seasons from the 1999-2006 season. She was replaced by Lynn Toler in the show's 2006-07 season. Ephriam is also known for her judge roles in Tyler Perry's Madea films.

Ephriam returned to television in fall 2014 with a new courtroom series titled after her, Justice with Judge Mablean. The series, produced by Entertainment Studios, is airing on the Justice Central cable channel and syndicated on various stations. It is the fifth courtroom series from Entertainment Studios.[2] Her daughter is writer/director/producer Tajamika Paxton.[3]

Ephriam was born in Hazlehurst, Mississippi but raised in Los Angeles, California, from the age of six. Although she had never actually served as a judge before presiding on Divorce Court, she came to the series with significant legal experience and knowledge of the law. She started her law career as a corrections officer in the Women's Division of the Federal Bureau of Prisons. She attended night classes at Whittier Law School where she earned her Juris Doctor degree in 1978.[4] In 1982, she opened her own law practice, dealing mainly with personal injury and family law cases. She soon became a Los Angeles Prosecuting Attorney.
Read more...

In 1999, Divorce Court was revived and Ephriam was selected to be the show's arbitrator. She was the first star of the reality-based version of The Divorce Court. Previous to that, the show used dramatic reenactments of real-life divorce cases. She was also the first African American and female to preside over the series.

While presiding over Divorce Court, Ephriam was noted for her humor. Her audience was frequently brought to laughter by Ephriam's striking and quirky voice and reactions of appall and bewilderment by the ex-couple's outrageous and absurd behaviors.

Ephriam's trademark phrase on Divorce Court was "Look deep before you leap," advising would-be newlyweds to examine each other's behaviors and attitudes carefully before they decide to marry. While Ephriam encouraged her litigants to discuss sensitive issues to get to the heart of what was causing their divorce, she was quick to restore order in her courtroom when things got out of hand, and she scolded her litigants for disrespectful behavior towards herself and each other in court.

In March 2006, it was announced that Ephriam would leave Divorce Court at the end of the 2005-06 season (her seventh behind the bench), reportedly because she and the show's producers were unable to come to an agreement on a contract extension. She was replaced by Judge Lynn Toler, a former judge from Cleveland Heights, Ohio, who formerly presided over the short-lived syndicated courtroom TV show Power of Attorney.

Well known as Madea's court judge, Ephraim portrays a strict and stern judge character in Madea films, who frequently presides over the many cases Madea lands herself into, always as result of violent and destructive conduct. The judge never sentences Madea to prison, instead she gives Madea unflattering though less severe punishments such as house arrest, becoming foster mother to a wayward teen (played by Keke Palmer) and going to therapy sessions with Doctor Phil.

Ephriam made a short appearance in the film adaptation of the play Diary of a Mad Black Woman. She also portrayed the same judge character in both Madea's Family Reunion and Madea Goes to Jail. As a judge, her first name is pronounced "may-BLENE," as in the Chuck Berry song "Maybellene."

Ephriam hosted an annual event on Father's Day called The H.U.F. Awards, where she leads a star-studded community celebration of otherwise unsung fathers. In June 2010, Ephriam expressed joy and appreciation for the event on The Jazz Joy and Roy syndicated radio show.

...I would love to get some more money to do what I really want to do, but just putting on this brunch for the fathers and allowing them to have a really wonderful Fathers Day, to share in the joy of good music and good food and good entertainment and being out with family, and all of us making a fuss over them, which doesn't happen for most of the fathers...That gives me great pleasure and great joy. It is also a joy to be able to award scholarships at The H.U.F Awards. I am just so excited about the scholarship recipients! There is the press that we're not going to college--we are going to college. The young people who applied ranged in GPAs from 1.5 to 5 points. We want to encourage all of them to go to college and pursue their dreams.

Ephriam also appeared on the first season of Celebrity Fit Club where she went from 208 lbs to 183, losing 25 lbs, 12% of her body weight. Ephriam revealed to VH1 that she has kept off all of the weight. She added that her weight goes up and down, but she never exceeds 183.