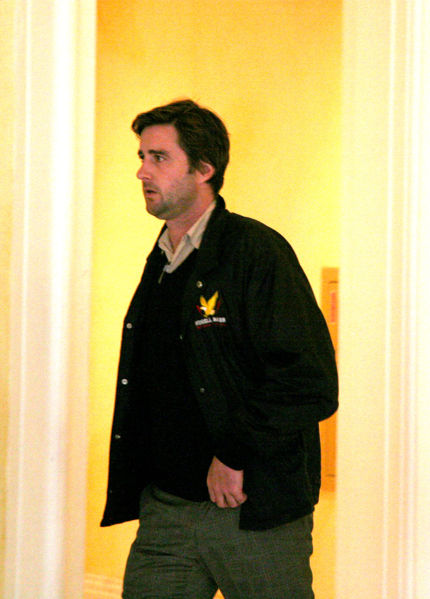 Luke Cunningham Wilson (born September 21, 1971) is an American actor known for his roles in films such as Idiocracy, Old School, Bottle Rocket, The Royal Tenenbaums, Blue Streak, Bongwater, and Legally Blonde. He was a member of the cast of the HBO television series Enlightened (2011-13). He is the younger brother of actors Andrew Wilson and Owen Wilson.

Wilson was born in Dallas, Texas, the youngest of three sons of Laura Wilson (née Cunningham; born 1939), a photographer, and Robert Andrew Wilson (1941-2017), an advertising executive and previously an executive at KERA,[1] a public television station. His family, originally from Massachusetts, is of Irish Catholic descent.[2] All three Wilson boys attended St. Mark's School of Texas. According to Owen, Luke was voted class president the first year he attended St. Mark's.[3]
Read more...

Wilson's acting career began with the lead role in the short film Bottle Rocket in 1994, which was co-written by his older brother Owen Wilson and director Wes Anderson. It was remade as a feature-length film in 1996.[1] After moving to Hollywood with his two brothers, he was cast opposite Calista Flockhart in Telling Lies in America[1] and made a cameo appearance in the film-within-the-film of Scream 2,[1] both in 1997. Wilson filmed back-to-back romantic films in 1998, opposite Drew Barrymore, Best Men, about a group of friends who pull off a heist on their way to a wedding,[1] and Home Fries, about two brothers interested in the same woman for different reasons.[1] He played the physician beau of a schoolteacher in Rushmore (also 1998), also directed by Anderson and co-written by brother Owen.[1]

In 1999, Blue Streak was released featuring Wilson as detective Carlson. He later starred opposite Reese Witherspoon in the 2001 comedy Legally Blonde,[4] which was followed by Old School and The Royal Tenenbaums.[1] Wilson also had a role on That '70s Show, as Michael Kelso's older brother Casey Kelso, appearing sporadically from 2002 through 2005.[5]

In 2006, Wilson starred in Idiocracy, Mike Judge's first film since 1999's Office Space. He portrayed an ordinary serviceman chosen for a cryogenics project. He awakens after hundreds of years in an America which is significantly less intelligent.[6]

Wilson and brother Owen have co-written a Wright Brothers biopic, in which they also plan to star.[10]