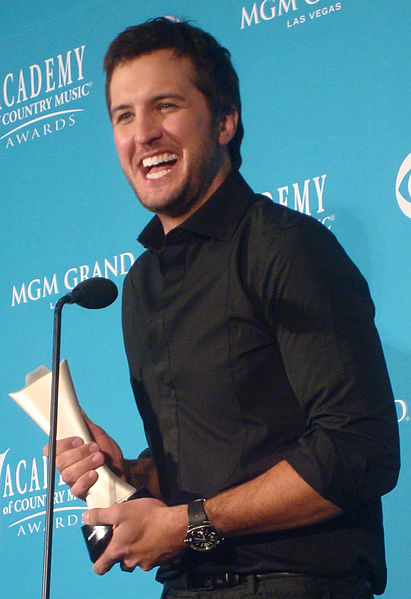 Thomas Luther "Luke" Bryan (born July 17, 1976) is an American singer and songwriter. He began his music career writing songs for Travis Tritt and Billy Currington - before signing with Capitol Records Nashville with his cousin, Chad Christopher Boyd in 2007.

In 2013, Bryan received the Academy of Country Music Awards, the Country Music Association Awards "Entertainer of the Year" award[5] - and has sold over seven million albums and 27 million singles worldwide.[6]

Bryan was born in Leesburg, Georgia,[7] to LeClaire (née Watkins) and Tommy Bryan, a peanut farmer.[8][9] Shortly before Luke was going to move to Nashville at age 19, tragedy struck his family. "My older brother, Chris, was unexpectedly killed in a ... car accident ... I'm kind of hyperventilating talking about it. ... You never truly ... move beyond it."[10] His mother, LeClaire, had made a statement: "We knew Luke at some point would come to Nashville," his mother said. "But ... you can't leave your family, and ... I couldn't bear the thought of him being away."[11]

Instead, Luke went to college at Georgia Southern University in Statesboro, Georgia, where he joined the Sigma Chi fraternity and graduated in 1999 with a bachelor's degree in business administration. Bryan made it to Nashville years later in 2007,[when?] after his father told him to pack his truck to pursue a career in music. He finally gained success as a songwriter, but soon after he signed as a performer; his first major success was "All My Friends Say."

Soon after his arrival in Nashville, Bryan joined a publishing house in the city. Among his first cuts was the title track of Travis Tritt's 2004 album My Honky Tonk History.[12]

He was later signed by Capitol Nashville to a recording contract. In the meantime, Bryan co-wrote Billy Currington's single "Good Directions", which went to number one on the Hot Country Songs chart in mid-2007.[13] Bryan co-wrote his debut single, "All My Friends Say", with producer Jeff Stevens. This song reached a peak of number 5 on the Hot Country Songs chart. In August 2007, Capitol Nashville released Bryan's debut album, I'll Stay Me.[14] Bryan wrote or co-wrote all but one of its 11 songs. The album's second single, "We Rode in Trucks", peaked at number 33 while "Country Man" reached number 10.[15]

On March 10, 2009, he released an EP titled Spring Break with All My Friends that featured two new songs, "Sorority Girls" and "Take My Drunk Ass Home," plus an acoustic version of "All My Friends Say."[16] After this EP, he released his fourth single, "Do I" in May 2009. Bryan wrote the song with Charles Kelley and Dave Haywood of Lady Antebellum, whose lead singer Hillary Scott also sings backing vocals on it.[17] The song reached number 2 on the Hot Country Songs chart.[18]

"Do I" was included on Bryan's second album, Doin' My Thing, which was released in October 2009. Also included on the album was a cover of OneRepublic's "Apologize".[19] Bryan wrote the album's next two singles, "Rain Is a Good Thing" and "Someone Else Calling You Baby", with Dallas Davidson and Jeff Stevens, respectively. Both of these songs went to number one on the country music charts. AllMusic gave this album a positive review as well, with Stephen Thomas Erlewine considering Bryan more "relaxed" in comparison to his debut. On February 26, 2010, Bryan released a second EP, titled Spring Break 2...Hangover Edition, which featured three new songs: "Wild Weekend", "Cold Beer Drinker", and "I'm Hungover".[citation needed] While Bryan is mainly known as a country music singer, he has explored other genres like alternative rock with his cover of "Apologize".

Bryan appeared on the April 18, 2010, episode of Celebrity Apprentice alongside fellow country star Emily West. The task for each team was to make over an up-and-coming country star, with Bryan being selected by team Rocksolid, led by Bill Goldberg, and West being selected by team Tenacity, led by Cyndi Lauper. Bryan's makeover failed to impress the judges, leading to Rocksolid losing the task. Bryan's single "Rain Is a Good Thing" and West's single "Blue Sky" were both sold on iTunes, with a month's worth of sales being donated to Lauper's charity, the Stonewall Community Foundation, resulting in $25,000 being raised.

Bryan released his third EP, Spring Break 3...It's a Shore Thing, on February 25, 2011, featuring four new songs - "In Love With the Girl," "If You Ain't Here to Party," "Shore Thing," and "Love In a College Town." This release was followed by Bryan's seventh single, "Country Girl (Shake It for Me)", which was released on March 14, 2011.[20] Also co-written by Bryan and Davidson,[21] it served as the lead-off single to his third studio album, Tailgates & Tanlines, which was released August 9, 2011. The album peaked at number one on the Top Country Albums chart and number two on the Billboard 200 chart. "Country Girl" peaked at number 4 on the country music charts and number 22 on the Billboard Hot 100 chart. The album's next three singles - "I Don't Want This Night to End", "Drunk on You", and "Kiss Tomorrow Goodbye" - all reached number one on the country music charts. Bryan, along with Eric Church, sang guest vocals on Jason Aldean's "The Only Way I Know," the second single from his 2012 album, Night Train.[citation needed]

On March 6, 2012, Bryan released his fourth Spring Break EP entitled Spring Break 4...Suntan City. Along with the title track, which Bryan co-wrote with Dallas Davidson, Rhett Akins and Ben Hayslip, the EP includes "Spring Break-Up", "Little Bit Later On", and "Shake the Sand".[22] On January 30, 2013, Bryan announced his first compilation album, Spring Break...Here to Party, which includes fourteen songs - twelve from his previous Spring Break EPs and two new tracks. It was released on March 5.[23] The album debuted at number one on both the Billboard Top Country Albums chart and the Billboard 200 chart, becoming the first album of his career to top the all-genre album chart. One of the new Spring Break songs, "Buzzkill", reached the top 20 on the Hot Country Songs chart.

On March 11, 2014, Bryan began his sixth year of spring performances at Spinnaker Beach Club in Panama City Beach, Florida.[28] On the same day, he also released his sixth Spring Break EP, Spring Break 6...Like We Ain't Ever.[29]

Bryan is the only country music artist to release an album of six number one singles on both the Billboard's Hot Country Songs and Country Airplay charts.[30]

2015-present: Kill the Lights and What Makes You Country

On November 11, 2014, it was confirmed that Bryan had begun writing and recording songs for his upcoming fifth studio album. His last Spring Break album, Spring Break...Checkin' Out, was released on March 10, 2015. It includes the six songs from the previous year's EP and five original new songs.

On May 19, 2015, Bryan released his first single from his fifth studio album, Kill the Lights, "Kick the Dust Up",[31] which peaked at number one on the Country Airplay chart. He co-wrote over half of the songs on this album. This album provides not only his country flare, but also has tracks that include a disco type beat along with the songs of romance. The album's second single, "Strip It Down", was released to country radio on August 4, 2015. The album was released on August 7. Kill the Lights sold 345,000 total copies its first week and beat out Dr. Dre's Compton to debut at number one on the Billboard 200 chart.[32] "Strip It Down" went number one in October 2015, making fourteen cumulative number ones. The album's third single, "Home Alone Tonight", released to country radio on November 23, 2015. The song also became his fifteenth song to reach number one. The album's fourth single, "Huntin', Fishin' and Lovin' Every Day", released to country radio on March 14, 2016. All six of the singles released from Bryan's Kill the Lights album reached number one on the Billboard Country Airplay chart, making Bryan the first artist in the 27-year history of the chart to achieve six number one singles from one album.[33]

It was announced that Bryan would perform at halftime of the 2015 Thanksgiving match-up between the Dallas Cowboys and Carolina Panthers.[34]

In 2016, Bryan was selected as one of 30 artists to perform on "Forever Country", a mash-up track of "Take Me Home, Country Roads", "On the Road Again" and "I Will Always Love You" which celebrates 50 years of the CMA Awards.[35]

On February 5, 2017, Bryan performed the National Anthem at Super Bowl LI at NRG Stadium in Houston, TX.[36] In September 2017, Bryan was announced as a judge for the revival of American Idol on ABC.[37]

Bryan released "Light It Up" in mid-2017. It served as the lead-off single to his sixth album, What Makes You Country, which was released on December 8, 2017. "Most People Are Good" and "Sunrise, Sunburn, Sunset" were released as the album's second and third singles, respectively. and the album's fourth single with the title track, released to country radio on October 22, 2018.

Bryan is married to Caroline Boyer, whom he met at a local bar while attending Georgia Southern University when Bryan was a senior and Boyer was a freshman. The two married on December 8, 2006, and have two sons together, Thomas Boyer Bryan, born March 18, 2008 and Tatum Christopher Bryan, born Aug 11, 2010.

In 2007, Bryan's older sister Kelly died unexpectedly (at home, of unknown causes) several days after organizing friends to attend his debut at the Grand Ole Opry.[38][39]

"My only older siblings...gone from the world, in a flash, in two...two different, crazy, tragic manners, that...we'll never know, and never understand."

After Kelly's husband, Ben Lee Cheshire, died in 2014, Bryan and his wife began raising their nephew Tilden (Til) and taking care of their nieces Kris and Jordan.[40]

The combined tragedies of losing his brother and sister is the inspiration for Bryan's single Drink a Beer.[41]

Bryan is a co-owner of Buck Commander, the sister company of Duck Commander. Buck Commander teamed up with the Outdoor channel and created a TV show for the avid hunter and enthusiast. Starring in the show are Bryan; Grant Taylor; Jordan Summit; Mike Miller; Willie Robertson, co-owner of Duck Commander; former MLB players Ryan Langerhans, Adam LaRoche and Tombo Martin; and Jason Aldean, a country singer-songwriter.

Bryan has supported numerous charities and causes, including the City of Hope and Red Cross. The causes Bryan supports are AIDS and HIV, cancer, children's disaster relief, health, and human rights.[43]

Bryan possesses a high baritone vocal range of two octaves from A2 to A4.[44] Commenting on his vocal performance in "Tailgates and Tanlines," Slant magazine's Jonathan Keefer described Bryan's voice as "a pleasant, if slightly nasal, baritone."[45]

Bryan has cited country artists George Strait, Alan Jackson, Alabama, and Merle Haggard as influences on his career.[46] He also cited hip hop bands Beastie Boys and Run-D.M.C. as the source of inspiration in an interview with The Huffington Post, noting, "I think there's been somewhat of a change with our generation. You know, nobody grew up more countrier than me, but I mean, I had Beastie Boys playing on little boom boxes and Run D.M.C. and all forms of music, so through the years, I just think it's all constantly blending together."[47]