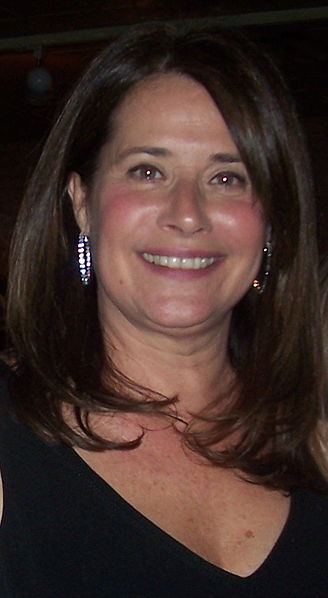 Lorraine Bracco (born October 2, 1954)[1] is an American actress. She is best known for her performances as Dr. Jennifer Melfi on the HBO series The Sopranos, and as Karen Friedman Hill in the 1990 Martin Scorsese film Goodfellas, for which she was nominated for the Academy Award for Best Supporting Actress.

Bracco was born in the Brooklyn neighborhood of Bay Ridge. She is the daughter of Eileen (née Molyneux 1926-2010) and Salvatore Bracco, Sr. She has a sister, Elizabeth Bracco, and brother, Salvatore Jr. Her mother was from England and met her father during World War II. Eileen came with Salvatore to the United States as a war bride.[2][3] Bracco grew up in Westbury, on Maxwell Drive on Long Island. She graduated from Hicksville High School in 1972. Her father was of Italian descent, while her mother was born in England to French parents.[4][5] Bracco is fluent in English, French and Italian.
Read more...

In 1974, Bracco moved to France, where she became a fashion model for Jean-Paul Gaultier. She lived there for about a decade.[6]

While still modeling, Bracco was approached by Marc Camoletti who offered her a major role in the film adaptation of one of his plays, Duos sur canapé (1979). Bracco did not imagine that she could be an actress and initially refused. She eventually made the film, but found the experience "boring" and her performance "terrible". Nevertheless, she played supporting roles in two other French films "for the money". After a friend of hers had suggested that she might enjoy acting if she took some training, she followed seminars with John Strasberg. Although she loved the lessons, she was still unsure of her talents.[7]

During the 1980s, she also worked as a disc jockey for Radio Luxembourg. She appeared as Paul Guilfoyle's hostage in the first season Crime Story episode, "Hide and Go Thief". Her sister Elizabeth played a hostage in the series pilot. Eventually, Italian director and novelist Lina Wertmüller gave Bracco a small part in the film Camorra. "She dressed me up like an Italian woman of no means. A street woman clad in disheveled clothes, hair unkempt and all that, and threw me on the set. She was so creative. I mean, Lina accentuated my eyes with dark make-up, the way Sophia Loren used to appear in those epic roles in the '60s. And talk about talent. She's so bright and perceptive. I mean, she's just fantastic. And yes, I learned a lot from her. She's a master of her profession, and I've been blessed not only with her, but also with so many masters," recounted Bracco to Daniel Simone during a 2007 interview. The experience inspired Bracco to pursue acting.[6]

Her other films include Someone to Watch Over Me, Riding in Cars with Boys, The Basketball Diaries, Medicine Man, Radio Flyer and Hackers.

Bracco is the owner of Bracco Wines, with association of Straight-Up Brands LLC.[8] Her line of wines was featured on the Season 1 finale of Bravo's show Top Chef in 2006. She appeared as a guest judge for the two-episode finale.[9] She also appeared as a special judge on Top Chef: All Stars in the episode titled "An Offer They Can't Refuse", which featured Italian cuisine.[10] Bracco appeared on a season 6 episode of Throwdown! with Bobby Flay as a guest judge for the ravioli throwdown.[11]

During the audition process for The Sopranos, David Chase wanted her to read for the lead female role of Carmela Soprano. However, Bracco had read the script and was drawn to the part of psychiatrist Dr. Jennifer Melfi. Bracco felt strongly enough about her ability and desire to play this part that she arranged a meeting with David Chase and talked him into letting her have a chance as Dr. Melfi.[12] It netted her three consecutive nominations for Outstanding Lead Actress in a Drama Series at the Emmy Awards in 1999, 2000 and 2001 and at the Golden Globe awards for Best TV Actress in a Drama in 2000, 2001 and 2002. She lost out at the Emmys in 1999 and 2001 and at the Golden Globes in 2000 to her co-star Edie Falco. She was nominated again at the 2007 Emmy Awards for Outstanding Supporting Actress in a Drama Series, thus being pitted against The Sopranos co-star Aida Turturro for the award.

Bracco married Daniel Guerard in 1979, divorcing in 1982. They have one daughter, Margaux Guerard.[14] She was in a 12-year relationship with actor Harvey Keitel, whom she met while living in Paris. They have one daughter, Stella Keitel (b. 1985). Bracco and Keitel fought a lengthy custody battle over Stella, resulting in Bracco's depression, a loss of acting roles, and $2 million in legal fees.[15][16] She married Edward James Olmos in 1994, divorcing in 2002.[14]

Bracco is a practitioner of Shotokan Karate.[16] In 2015, she authored a self help book To the Fullest: The Clean Up Your Act Plan to Lose Weight, Rejuvenate, and Be the Best You Can Be.[17]

Report a problem
Write to Lorraine Bracco at FanPal • 2020