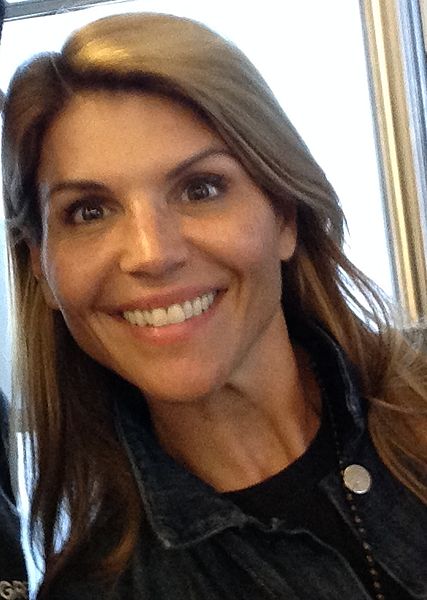 While different reference sources list her birthplace as either Queens, New York City,[3] or Hauppauge, New York on Long Island,[1][4] Loughlin explained, "I grew up in Hauppauge but I was born in Queens," moving with her family when "I was a year old."[5] She is the daughter of Lorellee Loughlin and Joseph Roy Loughlin,[6] a foreman for the New York Telephone Company.[7] She has one younger brother, Roy.[8]

She attended Oaks School #3 Elementary School in Oceanside, NY. She would go on to graduate from Hauppauge High School.[7] Loughlin is of Irish descent.[9]

After becoming interested in acting as a young child,[2] Loughlin began her career at age 11 as a print model,[3] recalling:

My mom had a friend that was going into Manhattan to meet with an agency for modeling. She was taking her teenage daughters in and she asked my mom if I wanted to go along. My mom reluctantly let me go, but I don't think she ever thought anything would come of it. And I went in and they handed me a contract and said, "We'll take you."[2]

From 1987 to 1995, Loughlin was cast as Rebecca Donaldson, Danny Tanner's (Bob Saget) co-host and later Jesse Katsopolis' (John Stamos) wife in the ABC sitcom Full House. Initially set for a six-episode arc, she became a regular for the remainder of the series run.[1] Within months after Full House ended, Loughlin co-starred with Tony Danza in the ABC sitcom Hudson Street (1995-96). The series was canceled after one season.[10]

In 1993, she starred in the television adaptation of Sidney Sheldon's novel A Stranger in the Mirror, which is a roman à clef on Groucho Marx and Erin Fleming,[11] with Loughlin playing Fleming's role. In 1997, she starred alongside Bruce Campbell in the film In the Line of Duty: Blaze of Glory. In 2000, Loughlin co-starred opposite Treat Williams in the Fred Olen Ray-directed thriller film Critical Mass. She also guest starred in Suddenly Susan, Spin City, Seinfeld, The Drew Carey Show, and as the superhero Black Canary in the Birds of Prey series in 2002.

From 2004 to 2005, Loughlin co-created, produced and starred in The WB drama series Summerland. She played Ava, the aunt who raises three children after their parents die in a car accident. The series was canceled after two seasons due to low ratings on July 11, 2005. In 2007, Loughlin co-starred in the ABC sitcom In Case of Emergency with David Arquette. She appeared in the film Moondance Alexander (2007), co-starring with her former Summerland castmate Kay Panabaker. Loughlin also was in attendance at Comedy Central's The Roast of Bob Saget which was hosted by John Stamos and premiered on August 17, 2008. At her table were Full House co-stars Dave Coulier and Jodie Sweetin. In 2010, Loughlin starred in the television film Meet My Mom, which premiered on the Hallmark Channel on Mother's Day.[12]

Loughlin made a brief appearance as Rebecca Donaldson, alongside John Stamos as Jesse Katsopolis, on a July 2013 episode of Late Night with Jimmy Fallon, following a reunion performance by Jesse and The Rippers.[14]

Loughlin was married to investment banker Michael R. Burns from 1989 to 1996.[4] On Thanksgiving 1997, Loughlin eloped with fashion designer Mossimo Giannulli, the creator of the Mossimo clothing line, whom she had met in 1995.[3] They have two daughters together, Isabella Rose, and Olivia Jade.[1] Olivia has a YouTube channel of beauty tips.[15] Loughlin also is a stepmother to Gianni, Giannulli's son from a previous relationship.[16]