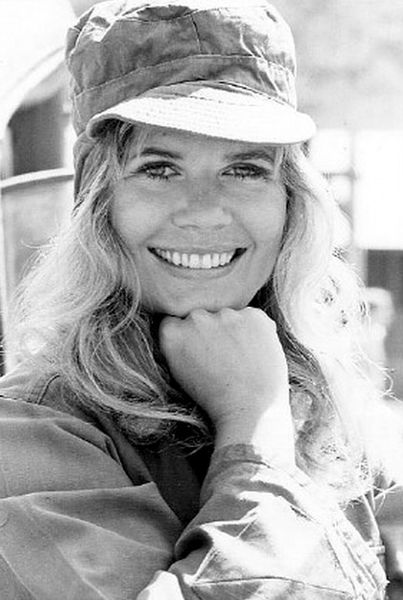 Loretta Jane Swit (born November 4, 1937) is an American stage and television actress known for her character roles. Swit is best known for her portrayal of Major Margaret "Hot Lips" Houlihan on M*A*S*H, for which she won two Emmy Awards.

Born in Passaic, New Jersey, of Polish descent, Swit's parents were Lester and Nellie Swit. She graduated from Pope Pius XII High School in Passaic in 1955. In 1957, she graduated from Katharine Gibbs School in Montclair in June, then was employed as a stenographer in Bloomfield. She studied drama with Gene Frankel in Manhattan in New York City and considered him her acting coach. She regularly returned to his studio to speak with aspiring actors throughout her career. Swit is also a singer, having trained at the American Academy of Dramatic Arts.
Read more...

In 1967, Swit toured with the national company of Any Wednesday, starring Gardner McKay. She continued as one of the Pigeon sisters opposite Don Rickles and Ernest Borgnine in a Los Angeles run of The Odd Couple.

In 1975, Swit played in Same Time, Next Year on Broadway opposite Ted Bessell.[1] She also performed on Broadway in The Mystery of Edwin Drood. From there, she played Agnes Gooch in the Las Vegas version of Mame, starring Susan Hayward and later, Celeste Holm. Most recently, Swit has toured with The Vagina Monologues.

She has played Shirley Valentine, a one-woman play, since the 1990s into the 2010s, appearing in a variety of locals and revivals.[2][3]

In October-November 2003, she starred as the title character in North Carolina Theatre production of Mame in Raleigh, North Carolina.[4]

In August-September 2010, Swit starred in the world premier of the Mark Miller play, Amorous Crossings, at the Alhambra Dinner Theatre in Jacksonville, Florida, directed by Todd Booth.

Starting in 1972, Swit played the lusty, extremely capable head nurse Major Margaret "Hot Lips" Houlihan in the television series M*A*S*H, a comedy set in an American mobile army hospital during the Korean War. Swit inherited the star-making role from actress Sally Kellerman, who portrayed Houlihan in the feature film. In the first few seasons her character was single and blindly patriotic, and she had no friends among the camp surgeons and nurses, with the notable exception of her married lover, Major Frank Burns, portrayed by Larry Linville. Over time her character was considerably softened. She married a lieutenant-colonel but divorced soon after. She became good friends with her fellow officers, and her attitude towards the Koreans in and around the camp became more enlightened. The change reflected that of the series in general, from absurdist dark humour to mature comedy-drama. Swit was one of only four cast members to stay for all 11 seasons of the show, from 1972 to 1983 (the others are Alan Alda, Jamie Farr and William Christopher).

Swit and Alda were the only actors to have been in both the pilot episode and the finale; she appeared in all but 11 of the total of 256 episodes. Swit received two Emmy Awards for her work on M*A*S*H. Later, she was also the first M*A*S*H star to visit South Korea, when she narrated the documentary Korea, the Forgotten War.

Her favorite episodes are "Hot Lips & Empty Arms", "Margaret's Engagement" and "The Nurses".[5]

She also had a close relationship with Harry Morgan, who played Colonel Sherman T. Potter. They became neighbors, after the series ended, until his death on December 7, 2011.[6] Swit continues to stay close to Alda, along with his wife, three daughters and seven grandchildren.[7]

In 1981, Swit played the Christine Cagney role in the movie pilot for the television series Cagney & Lacey but was precluded by contractual obligations from continuing the role. Actress Meg Foster portrayed Cagney for the first six episodes of the television series, with Sharon Gless taking over the role from that point on.

Swit also guest-starred in shows such as Bonanza, The Love Boat, Win, Lose or Draw, Gunsmoke, Match Game, Pyramid, The Muppet Show and Hollywood Squares. On one episode of Match Game, Swit wrote the Polish greeting "Dzień dobry" (even with the diacritical mark) on her card during the introduction. She also starred in Christmas programs such as the television version of The Best Christmas Pageant Ever and 1987's PBS special A Christmas Calendar.[8] In 1988 she hosted "Korean War-The Untold Story", a documentary on the true events of the war and went to South Korea to film it, becoming the first M*A*S*H cast member to actually visit the country. In 1992, she hosted the 26-part series Those Incredible Animals on the Discovery Channel. Swit's latest appearance was on GSN Live on October 10, 2008.

She was also in the TV movie The Last Day, 1975, with Richard Widmark and Robert Conrad.[9]

Swit married actor Dennis Holahan in 1983 and divorced him in 1995. Holahan played Per Johannsen, a Swedish diplomat who became briefly involved with Swit's character in an episode of M*A*S*H. Swit has not remarried and has no children.

In the 1980s, Swit supported efforts of R Adams Cowley, founder of the shock trauma unit at the University of Maryland, the first of its kind in the United States. Swit helped bring attention to his use of helicopters to transport injured civilians to shock trauma centers since 1969.