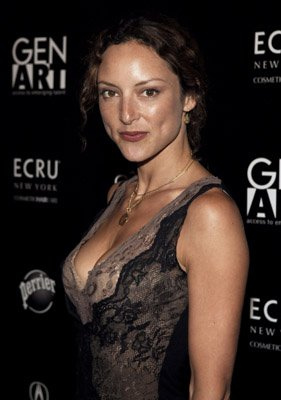 Lola Luna Glaudini (born November 24, 1971) is an American actress. She is best known for her portrayal of Elle Greenaway on CBS's Criminal Minds, and for her role as Deborah Ciccerone-Waldrup on HBO's The Sopranos.

Glaudini was born November 24, 1971, in Manhattan, New York, New York. She is of Sicilian Italian and of Russian Jewish and Ukrainian Jewish descent.[1] She is the daughter of playwright Robert Glaudini, in whose play The Poison Tree she appeared at the Mark Taper Forum in Los Angeles. She also starred in the drama Demonology at the Mark Taper Forum, for which she won a Drama-Logue Award as Best Actress. Her mother Nina Diane Kapler, remarried Rosen, is a writer and college instructor in California. She attended Bard College.
Read more...

Between 2001 and 2004 she had a recurring role on the HBO series The Sopranos as Federal Agent Deborah Ciccerone-Waldrup. In 2005 she was a regular on the CBS series Criminal Minds as Elle Greenaway, but left the show early in the second season. Before those roles she appeared on NYPD Blue as Dolores Mayo, a heroin-addicted office assistant. She has guest starred in The Good Guys, The King of Queens, Andy Richter Controls the Universe, Boomtown, Special Unit 2, Law and Order: Criminal Intent, Las Vegas, Monk, and ER. Glaudini also appeared briefly in the Neil LaBute film, Your Friends & Neighbors.

In the 2006 film Invincible, she had a brief role as the first wife of Vince Papale, played by Mark Wahlberg, where she is seen berating Papale's career failures and informs him of divorce. She played Kat Damatto on the NBC mini-series Persons Unknown in 2010. She costarred with Mark Harmon in the 2011 USA original movie Certain Prey, based on the bestselling book of the same name by John Sandford.[2]

Glaudini lives in Brooklyn with her husband, Stuart England, and two sons.