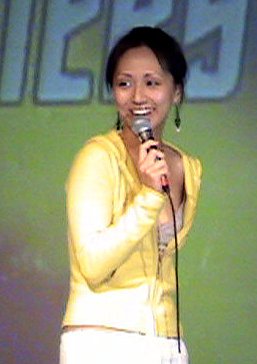 Park was born in South Korea and raised in San Jose, California. She participated in a number of theatrical productions in her teens at Notre Dame High School and Bellarmine College Preparatory.[1]

In 2000, Park received a Bachelor of Fine Arts degree from Boston University. During her college career, she spent a semester in England, studying at the London Academy of Music and Dramatic Art and the Royal Academy of Dramatic Art.[1] Her college stage credits included Mad Forest, Lysistrata, Cyrano de Bergerac, Richard III, and The Trojan Women, among others.[2]

Also in 2001, less than a year after graduation, Park was cast in the role of Hoshi Sato in the fifth incarnation of the Star Trek franchise, Star Trek: Enterprise, which premiered in September 2001. Sato was the ship's communications officer, with a natural gift for translating alien languages. Park herself is fluent in both English and Korean, and she also speaks some French.[4]

In October 2003, Park starred in UA's world premiere of the Mary Fengar Gail’s play Fuchsia.[7] From October 19 to November 11, 2005, she played Clytemnestra in a New York City production of Agamemnon.[8] In 2011, Park played the role of Anne Deever in a production of Arthur Miller's All My Sons at the Matrix Theater in Los Angeles.[9] She is also the co-founder of the theater company Underground Asylum.[10]

In 2009, Park became a series regular in the second season of Crash, playing the role of Maggie Cheon on the Starz Network; she co-starred in thirteen episodes. The show was subsequently cancelled after the death of Dennis Hopper.[11][12]

Park is an active student of dance, remarking that "dancing has always been my second love". She has continued to study and practice ballet, among other dance forms.[4]