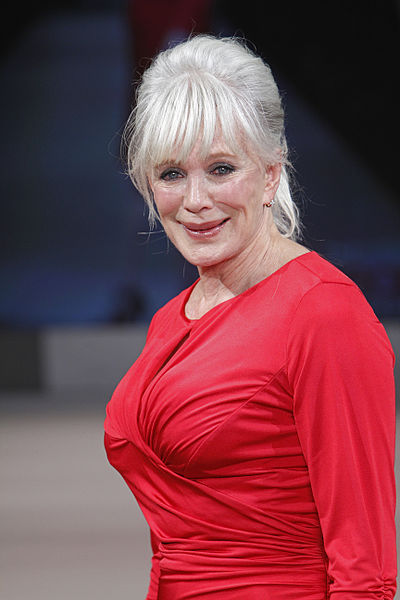 Linda Evans (born Linda Evenstad on November 18, 1942), is an American actress known primarily for her roles on television. In the 1960s, she gained notice for playing Audra Barkley, the daughter of Victoria Barkley (played by Barbara Stanwyck) in the Western television series, The Big Valley (1965-1969). However, she is most prominently known for the role of Krystle Carrington, the devoted wife of Blake Carrington (played by John Forsythe) in the 1980s ABC prime time soap opera Dynasty, a role she played from 1981 to 1989.

Evans, the second of three daughters, was born Linda Evenstad in Hartford, Connecticut, in 1942, to Arlene (née Dart; 1917-1969) and Alba Evenstad (1904-1958), both of whom were professional dancers. "Evenstad" was the name of the small farm in Nes, Hedmark in Norway from where her paternal great-grandmother emigrated to the United States in 1884 with her young son (Evans's grandfather) and a couple of relatives. When Evans was six months old, the family moved from Hartford to North Hollywood. She attended Hollywood High School, where she was a sorority sister of future actress Carole Wells. Her introduction to drama came through classes that she took "as a form of therapy, to cure her of her shyness."[1] When she started her professional career, she changed her last name to "Evans".
Read more...

Evans's first guest-starring role was on a 1960 episode of Bachelor Father. The series starred John Forsythe, with whom she would costar 20 years later on Dynasty. After several guest roles in The Adventures of Ozzie and Harriet between 1960 and 1962, and guest appearances on television series such as The Lieutenant, Wagon Train and Outlaws, Evans gained her first regular role in 1965 in The Big Valley. Playing Audra Barkley, daughter of Victoria Barkley (played by Barbara Stanwyck), Evans was credited in the series until it ended in 1969, though she was only a semi-regular cast member during the last two seasons.

On December 31, 1967, John Derek recruited his wife to operate one of his cameras after he had been commissioned by daredevil Evel Knievel to film his motorcycle jump of the fountains at Caesars Palace in Las Vegas. It was Evans who captured the iconic images of Knievel's devastating crash as the jump failed.[2]

With George Peppard in Banacek, 1975

Throughout the 1970s, Evans continued to appear on television largely in guest roles. She appeared in a slew of detective shows such as The Rockford Files, Mannix, Harry O, Banacek, McCloud and McMillan & Wife. In 1977, she starred with James Franciscus and Ralph Bellamy in the espionage drama series Hunter, though the show lasted for only 13 episodes.

In films, Evans co-starred with Lee Marvin and Robert Shaw in a 1979 thriller, Avalanche Express, and in 1980 she co-starred in one of Steve McQueen's final films, the western Tom Horn.

In 1980, Evans was cast as Forsythe's wife, Krystle Carrington, in Aaron Spelling's opulent new prime time soap opera, Dynasty. Intended as ABC's answer to the hit CBS series Dallas, the show first aired in January 1981. Although initially sluggish in the ratings, audience figures improved after the show was revamped and British actress Joan Collins was brought in to play opposite Evans and Forsythe as the evil Alexis Carrington. By the 1984-85 season, Dynasty was the number one show on American television, even outranking Dallas.

Audiences became enthralled by the onscreen rivalry and infamous catfights between Krystle and Alexis, and Evans and Collins became two of the most celebrated television stars of the decade. Evans was nominated five times for the Golden Globe Award for Best Actress in a TV Drama series (every year from 1982 to 1986), winning in 1982 in a tie with Barbara Bel Geddes of rival soap Dallas. Evans also won five People's Choice Awards as Favorite Actress in a Drama Series in 1982, 1983, 1984, 1985, and 1986, and was nominated for an Emmy Award for Outstanding Lead actress in a Drama Series in 1983. Due to her character's name on Dynasty, Evans appeared in an ad campaign for Crystal Light beverages, starting in 1984.

Evans left Dynasty in 1989, four months before the series came to an end, after only appearing in six episodes of the 22-episode ninth and final season. After leaving Dynasty, Evans semi-retired from acting and made only occasional television appearances. Instead, she devoted her time to fitness issues and set up a small chain of fitness centers. In the 1990s, Evans hosted infomercials for Rejuvenique, a mask for toning facial muscles. She had previously written the Linda Evans Beauty and Exercise book in 1983. She also kept in touch with Forsythe, until he died on April 1, 2010, and she was very devastated by his passing. Evans was asked when she first met Forsythe, as an unfamiliar actress, for her first speaking part, with him: Her agent "signed me up for 'Bachelor Father' and John Forsythe gave me my first speaking part." [3]

Evans at Carousel Ball in Denver, 1995

In 1991, she returned to the role of Krystle Carrington for the television miniseries Dynasty: The Reunion. Following this, she appeared in three made-for-TV movies in the 1990s, but then retired from screen acting altogether in 1997.

In 2005, actress Melora Hardin portrayed Evans in Dynasty: The Making of a Guilty Pleasure, a fictionalized television movie based on the creation and behind the scenes production of Dynasty.[4]

In 2006, Evans reunited with her Dynasty castmates for the non-fiction reunion special Dynasty: Catfights and Caviar. She then starred in the stage play Legends opposite her former Dynasty rival Collins. In 2009, Evans appeared in and won the British TV program Hell's Kitchen, working under Michelin-starred chef Marco Pierre White.[5]

Evans has a star on the Hollywood Walk of Fame at 6834 Hollywood Boulevard in Hollywood, California.[6]

In her late teens, Evans was engaged to Patrick Curtis, who later became a press agent and married Raquel Welch.[7] Evans has been married and divorced twice. Her first marriage was to actor, photographer and film director John Derek. They started dating in 1965, married in 1968 and separated on Christmas day 1973,[8] when Derek disclosed his affair with Bo Derek,[9] who was 30 years his junior, and was 17 years old at the time.[10] Evans's second marriage was to Stan Herman, a property executive, from 1975 to 1979.[11] She then lived with restaurant owner George Santo Pietro, from 1980 to 1984.[12][13] Evans also dated The Big Valley castmate Lee Majors for a brief period following her second divorce, as well as businessman Dennis Stein (a former fiancé of Elizabeth Taylor) during the mid-1980s. In 1989, Evans began a relationship with new age musician Yanni, which lasted until 1998.[14] Her best friends are her ex-stepdaughter, television writer Sean Catherine Derek, and Bunky Young, Evans's former assistant whom she has known since the mid-1960s; both reside near her in Washington state.[15] She is also close with John's Europe-based second wife, Ursula Andress,[16] a sometime houseguest at her home in Beverly Hills.[17][18]

After being diagnosed with idiopathic edema,[19] Evans began investigating alternative healing, delving into Eastern philosophy and naturopathy. In 1985, she became involved with controversial metaphysical teacher J. Z. Knight and her Ramtha's School of Enlightenment and eventually moved to Yelm, Washington to be closer to Knight and her school.[20][21]

Evans appeared in Playboy magazine at the behest of her then-husband John Derek in 1971. As she gained tremendous fame on Dynasty, the photos were published a second time in 1982.

Evans was arrested in May 2014 for driving under the influence of alcohol.[22]