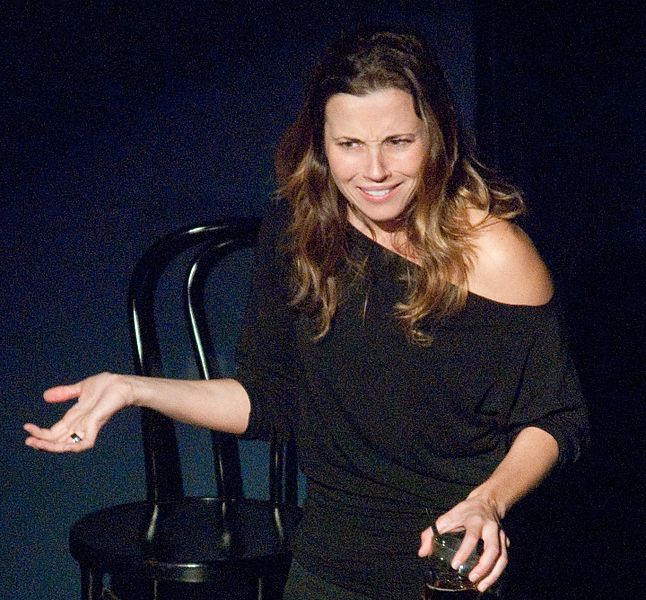 Cardellini was born in Redwood City, California,[1] the daughter of Lorraine (née Hernan), a homemaker, and Wayne David Cardellini, a businessman.[3] She is the youngest of four children.[3] Cardellini was raised Catholic.[4] She made her first public appearance at age 10, when she sang in a school play. Subsequently, she acted in several school productions and started attending drama lessons.[5] She graduated from nearby Mountain View's Catholic St. Francis High School in 1993,[6] then moved to Los Angeles to seek roles in television and film.[5]

Cardellini was a contestant in a 1994 episode of The Price Is Right, winning a fireplace.[7]

Cardellini received her first big break role in 1996 when she landed a starring role as Sarah on ABC's Saturday morning live-action children's series, Bone Chillers. Following this, she made guest appearances on prime-time programs such as Step by Step, Clueless, 3rd Rock from the Sun, and Boy Meets World as Lauren, a girl that came between the show's star couple. Cardellini co-starred in the AMC mini-series The Lot in 1999,[5] and spent the summer in Europe as part of a touring production of Lancelot, a fourteenth-century Dutch tragedy.[6]

Cardellini had her first major success when she landed one of the starring roles in the NBC series Freaks and Geeks, which debuted during the 1999-2000 season. As Lindsay Weir, an honor student in the midst of an identity crisis, Cardellini earned positive response that subsequently catapulted her to fame. Cardellini starred in the live-action adaptation of Scooby-Doo in 2002, in which she played the cartoon character Velma Dinkley. She later reprised the role of Velma in 2004's Scooby-Doo 2: Monsters Unleashed. She joined the cast of the hospital drama ER in 2003 as Samantha Taggart, a free-spirited nurse. Cardellini acted for six seasons on ER, until the series finale, "And in the End...", and with the cast won the TV Land ensemble Icon Award in 2009.[8]

Her other film work includes roles in Dead Man on Campus, Strangeland, Good Burger, Legally Blonde, Brokeback Mountain (for which she was nominated for the ensemble Gotham[9] and Screen Actors Guild awards),[10] and a starring role in the Happy Madison film Grandma's Boy as Samantha. She was the voice of Ursula in the role-playing video game, Gladius, and played the voice of Bliss Goode on the ABC animated series The Goode Family. In 2007, Cardellini was chosen to play lovelorn Clara in the CBS miniseries Comanche Moon, a prequel to 1989's Lonesome Dove.[11]

In 2010 and 2011, Cardellini returned to the stage with the Dr. God comedy group in Los Angeles and San Francisco,[12][13] appeared in Kill the Irishman and Super, and starred in the independent film Return. She appeared with cast members and producers of Freaks and Geeks and Undeclared at the Paley Center for Media PaleyFest on March 12, 2011.[14][15] From June 15, 2012 to February 15, 2016, she has been the voice of Wendy on the Disney Channel show Gravity Falls.

Cardellini voice acts periodically on the podcast and live show The Thrilling Adventure Hour, on the Sparks Nevada: Marshal on Mars segments.[16][17] In 2013, she was chosen to play Sylvia Rosen, a love interest of Don Draper on Mad Men. For her performance on Mad Men, she received an Emmy nomination for Outstanding Guest Actress in a Drama Series. Starting in 2015, she joined Kyle Chandler on a new Netflix series Bloodline from the creators of Damages.[18] The show was cancelled in 2016, and ended after its third season.[19]

Cardellini attended Loyola Marymount University's[20] College of Communication and Fine Arts, graduating in 2000 with a degree in theatre arts. In 2007, she was recognized as a "Distinguished Alumna" by the university.[21] She dated her Freaks and Geeks co-star Jason Segel for five years following the show's cancellation.[22] In October 2011, Cardellini and her boyfriend Steven Rodriguez announced her pregnancy.[23] Cardellini gave birth to their daughter Lilah-Rose in February 2012.[24] Cardellini and Rodriguez became engaged in June 2013.[25]

Cardellini at the 2011 PaleyFest