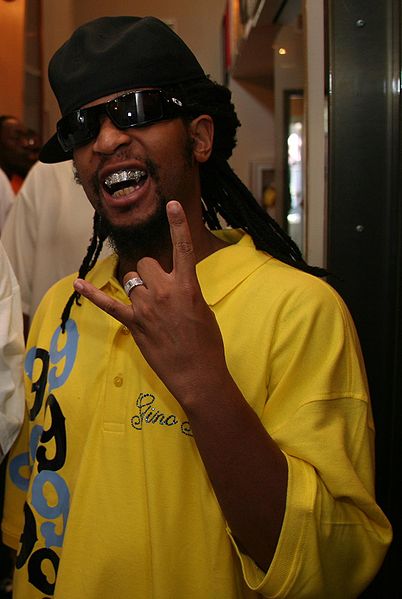 Jonathan Smith (born January 17, 1971),[1] better known by his stage name Lil Jon, is an American rapper, record producer, and DJ. He was the frontman of the group Lil Jon & The East Side Boyz, which he formed in 1995, and they released several albums until 2004.

After going solo, he released a new album in 2010 titled Crunk Rock. He was featured on Celebrity Apprentice during its 11th and 13th seasons.

Born and raised in Atlanta, Georgia, Smith graduated from Frederick Douglass High School in Atlanta. Jon made his debut as a guest DJ on WRFG's "Macadocious in Effect" underground hip-hop show [2] and after working as a DJ for Atlanta night clubs, he worked for So So Def between 1993 and 2000.[1]
Read more...

Lil Jon & the East Side Boyz

Smith took the stage name Lil Jon and formed musical group Lil Jon & the East Side Boyz, with rappers Big Sam (born Sammie Dernard Norris) and Lil' Bo (born Wendell Maurice Neal).[3] The group signed to the Atlanta-based Mirror Image Records and were distributed by Ichiban Records. In 1997, Lil Jon & the East Side Boyz debuted with Get Crunk, Who U Wit: Da Album. It included singles "Who U Wit?" and "Shawty Freak a Lil' Sumthin'", the latter of which came out in 1998. Both singles charted on the Billboard Hot R&B/Hip-Hop Songs chart at No. 70 and No. 62, respectively.[4]

In 2000, Jon co-founded the label, BME Recordings, with his three long time friends, Vince Phillips, Rob Mac and Emperor Searcy. He released his breakthrough album titled We Still Crunk!. Among the tracks on that project was the hit single "I Like Those Girls," which reached No. 55 on the R&B chart and No. 3 on the Hot Rap Tracks chart.

Lil Jon was talked about as "the new guy" by street team people in the markets where he was attracting his biggest audiences - namely Atlanta, St. Louis, Memphis and Dallas. Bryan Leach, A&R at TVT, went to one of Lil Jon's Atlanta shows and was blown away by its immense energy.[5] Leach told HitQuarters: "It was like early Beastie Boys, when they had the energy of a rock group but they were rapping, and ... that energy is what crunk music is all about."[5]

Lil Jon & The East Side Boyz signed to TVT Records in 2001 and debuted there with Put Yo Hood Up, which combined previously released tracks with new ones. The group's first nationally played single was "Bia' Bia'", which featured rappers Ludacris, Too Short, Big Kapp, and Chyna Whyte.[1] "Bia' Bia'" peaked at No. 97 on the Billboard Hot 100 and No. 47 on the Billboard R&B chart.[4]

Lil Jon has also produced many hit urban singles. From 2003 to 2005, while still with The East Side Boyz, Lil Jon produced hits such as "Salt Shaker" by Ying Yang Twins, "Yeah!" by Usher, "Freek-a-Leek" by Petey Pablo, "Shorty Wanna Ride" by Young Buck, "Shake That Monkey" by Too Short, "Girlfight" by Brooke Valentine, "Presidential" by YoungBloodZ.[1] Lil Jon entered the San Francisco Bay Area hyphy music scene in 2006 with his collaborations with Bay Area rapper E-40: Lil Jon produced E-40's single "Tell Me When To Go" and had E-40 and Atlanta rapper, Sean P of the YoungBloodZ, on his own "Snap Yo Fingers".[6] During that same year he produced a song called "Go to Church" for Ice Cube.

MTV News reported in March 2008 that Crunk Rock was taking more time to complete than Lil Jon planned.[8] As part of TVT Records' 2008 bankruptcy auction, Lil Jon withdrew his multimillion-dollar objection to the TVT sale proceedings and agreed to TVT's transfer of his artist agreement to The Orchard. In return, The Orchard released Lil Jon from all future obligations and returned the rights to the master recordings of Crunk Rock.

Crunk Rock was released on June 8, 2010, and it features artists such as LMFAO, Soulja Boy, Ying Yang Twins, Waka Flocka Flame, R. Kelly, and many more.[9] In March 2011, Lil Jon took part in the fourth season of Celebrity Apprentice on NBC and was eliminated in the Final Four.[10]

In July 2011, he said that he is working on a new studio album called Party Animal and has released a song with LMFAO called "Drink", which was used in the trailer for the film The World's End. In 2013, Lil Jon partnered with Zumba Fitness to create a new nightclub tour titled "Zumba Nightclub Series". For Zumba Fitness, he released a new song called "Work".

In January 2014, Lil Jon collaborated with DJ Snake and released "Turn Down for What" on Columbia Records. In February 2014, the single entered the top 5 on the Dance/Electronic chart and debuted at number 38 on Billboard's Hot 100.[11] The song peaked at number 4 on the Billboard Hot 100 and went on to be certified 5x Platinum by the RIAA.[12]

Jason Birchmeier of AllMusic has described Lil Jon's production as "bass-heavy," and his album Put Yo Hood Up as having "a long and varied list of guest rappers to accompany the beats". Describing that album with guest performers, Birchmeier remarked: "The end result is an album that resembles a street-level mixtape rather than a traditional artist-oriented album".[16]

Lil Jon was specifically influenced by 2 Live Crew, 8Ball & MJG, Three 6 Mafia, OutKast, Geto Boys, UGK, N.W.A, Dr. Dre, and Sir Mix-A-Lot. Alex Henderson, also of allmusic, contrasted Lil Jon's style of "rowdy, in-your-face, profanity-filled party music" with other Southern rappers, those who "have a gangsta/thug life agenda" and those who convey "serious sociopolitical messages".[17] Lil Jon has also found influence in rock music, having worked with Rick Rubin and Korn.[18] He expresses this influence in his aggressive delivery and 'yelling' style of rap. He was seen on VH1's 100 Greatest Artists of All-Time program wearing a Bad Brains T-shirt, and he used to listen to Lynyrd Skynyrd while growing up in the South in the 1970s. For Trick Daddy's "Let's Go", Lil Jon sampled the bass line from Ozzy Osbourne's "Crazy Train".[19]

Lil Jon has been a contestant on Celebrity Apprentice, finishing 4th in its 11th season and 3rd in its 13th season, The All-Star Celebrity Apprentice. While on the show, it was reported that Donald Trump had referred to Lil Jon repeatedly as "Uncle Tom" until confronted by Lil Jon and other members of the crew.[20][21]

He was an avid fan of the NHL's Atlanta Thrashers until they relocated to Winnipeg in 2011.[23] He has since become a fan of the NHL's newest franchise, the Vegas Golden Knights. He has recently also become a fan of the University of Tennessee Volunteers, which adopted his hit song "Turn Down for What" on third downs, changing it to "Third Down for What." On October 4, 2014, Lil Jon made an appearance via Jumbotron encouraging the Volunteers to beat the University of Florida Gators.

Lil Jon is a fan of the television show The Walking Dead and has made multiple appearances as a guest on Talking Dead.

with the East Side Boyz

A Grammy Award (stylized as GRAMMY) is an award presented by The Recording Academy to recognize achievement in the music industry.

An MTV Video Music Award (abbreviated as a VMA) is an award presented by the cable channel MTV to honor the best in the music video medium.

The American Music Awards is an annual awards ceremony created by Dick Clark in 1973. Lil Jon and The Eastside Boyz has received two nominations, winning one Favorite Rap/Hip Hop Band/Duo/Group .[24][25]

Lil' Jon is a playable character in the video game Tony Hawk's American Wasteland as an unlockable and Def Jam: Icon. His song "Get Low" was also included in "Need for Speed Underground".