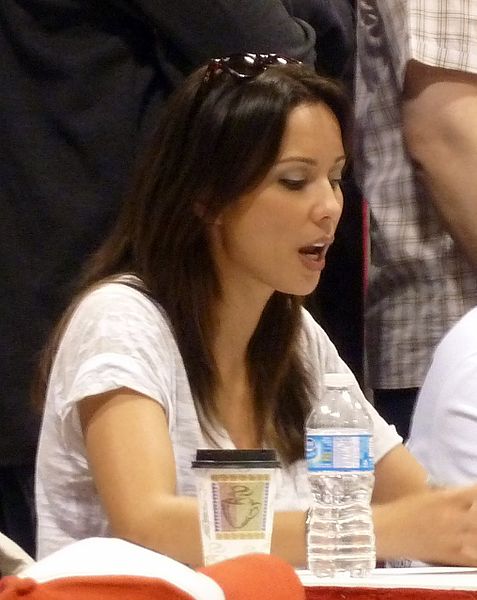 Alexandra Lecciones Doig (born June 8, 1973) is a Canadian actress. She portrayed the title role in the 2000-05 Canadian-American science fiction-adventure television series Andromeda. She also portrayed the female lead role of Rowan in the science fiction-action horror film Jason X (2002), the tenth installment of the Friday the 13th film series and currently appears in the Aurora Teagarden mystery films on the Hallmark Movies & Mysteries Channel.

Doig was born in Toronto, Ontario, Canada. She is the younger child of Gloria B. Lecciones and David W. Doig. Her mother is a registered nurse who originally came from Dumaguete City, Philippines, and her father is a Canadian engineer of Scottish and Irish ancestry who was a petroleum executive officer in Toronto.[1]

As a child, Doig studied rhythmic gymnastics[2] and, as a teenager, she studied American Sign Language. She developed a strong interest in acting and was inspired to become an actor at age 9 after she watched a theatre production of Porgy and Bess.[3]

While completing compulsory secondary education at Don Mills Collegiate Institute, she enrolled in a vocational modelling program. There, at age 16, she was immediately offered representation by a talent agent and booked in various modelling projects. She chose to drop out from her final year in high school to pursue an acting career.[citation needed]

The initial media exposure led to her co-hosting the Canadian game show Video & Arcade Top 10 (1991-2006).[4] While auditioning for television and film roles, she worked on theatre productions of Romeo and Juliet and Arsenic and Old Lace.[5]

Her first television acting role was as "Second Girl" on The Hidden Room in 1993. Her first recurring role was in the TV series TekWar in 1994 where she portrayed the role of Cowgirl.[3] Her first movie role was in Jungleground (1995). Doig got her first big break with a starring role in the movie No Alibi in 2000.[6] She also landed the title role in Gene Roddenberry's sci-fi TV series Andromeda where, from 2000 to 2005, she portrayed the Andromeda Ascendant ship's computer in three personas — as the ship's powerful AI (artificial intelligence) on the ship's screen, as the AI's hologram, and as Rommie, the android avatar of the AI.[7]

In 2002, she played the female lead role of "Dr. Rowan LaFontaine" in the horror film Jason X, the tenth installment of the Friday the 13th film series.[8] In a recurring role as Dr. Carolyn Lam, Doig appeared in 11 episodes of the ninth and tenth seasons of Stargate SG-1 between 2005-2007.[9] In 2010, Doig appeared in six episodes in the remake of V as the alien physician Dr. Leah Pearlman.[10] In 2012, she began playing the role of Liber8 terrorist Sonya Valentine in the Canadian science fiction TV series Continuum.[9]

In 2017, Doig appears in a recurring role in the fifth season of Arrow as Talia al Ghul,[3] and portrays DeAnn Anderson, one of the main roles in The Arrangement[3]

Lexa Doig dated actor Michael Shanks after they met on the set of Andromeda,[11] where the former starred and the latter guest-starred in the 2001 episode "Star Crossed." They married on August 2, 2003, and they worked together again in the 2003 episode "Day of Judgment, Day of Wrath" of the same TV series. The couple were castmates in the final two seasons of Stargate SG-1. They worked together in the action thriller Tactical Force (2011), in which Doig portrayed an LAPD SWAT officer and Shanks played the role of a Russian mob leader. They have two children, a son and a daughter, in addition to Shanks' child from a previous relationship.[11]

Doig and Shanks are actively involved as charity fundraising partners for the Multiple Sclerosis Society of Canada.[12]