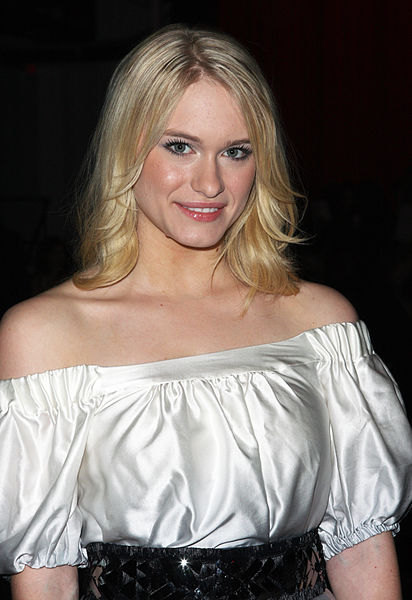 Rambin was born in Houston, Texas, to Joseph Howard Rambin III and the former Karen Stacy Guthrie, who founded Moody Rambin Real Estate.[2][3] She has three siblings, her brother, Joseph Rambin, an older half-sister, Mary Rambin, and an older half-brother, Jay Rambin. Rambin began performing in school plays and studied at the Houston School of Film and Theatre and at St. Francis Episcopal Day School where she starred in her first school play before moving to New York when she got her first major role on All My Children. While acting, she has also pursued her high school diploma through the Texas Tech University Independent School District.[4]
Read more...

Rambin at the premiere of War, Inc. at the 2008 Tribeca Film Festival.

Rambin started her career at age of 13, as a series regular on ABC's All My Children (2004-08), playing the role of Lily Montgomery, the autistic daughter of Jackson Montgomery, played by Walt Willey. It was announced that Rambin had been cast in another role on All My Children, playing the street-smart but lovable older half sister of Lily Montgomery, Ava Benton, where the role only lasted for two consecutive years. Rambin was the only actress from All My Children to be nominated for the 33rd Annual Daytime Awards and 34th Annual Daytime Emmy Awards. She was nominated for Outstanding Younger Actress in a Drama Series for her roles of Lily Montgomery and Ava Benton. She later appeared on an episode of Law & Order: Special Victims Unit.[5]

Rambin was cast as the daughter of Virginia Madsen and David James Elliott on the ABC television series, Scoundrels (2010).[8] However, the series ended its eight-episode run on August 15, 2010, due to low ratings. Rambin appeared on the Disney Channel show, Wizards of Waverly Place (2007-12), in the recurring role of Rosie, who is a Guardian Angel turned Angel of Darkness who was in love with Justin to steal the Moral Compass; Rambin made her debut on the episode "Everything Rosie for Justin" and left the show after the episode "Wizards vs. Angels". Later, Rambin was cast in the recurring role of Chloe Hall, on the long-running CW series, One Tree Hill (2003-12). Then later, Rambin was cast as Molly Sloan on the CBS crime-drama CSI: Miami (2002-12).

It was announced that Lionsgate and director Gary Ross cast Rambin in her first major studio film, in the role of Glimmer, the cut-throat District 1 Tribute in the first film adaption (2012) of the popular book series called The Hunger Games (2008-10) by Suzanne Collins.[9] In an interview with Seventeen, Rambin explained how she trained for the role, "I did a lot of sword training, which was really challenging. I also did a lot of boxing training and hand-to-hand combat. I just had to get in the mindset of someone who would want to do that every day! It was cool because I pushed myself physically and mentally. I couldn’t be vain about being sweating and smelling gross or worry about taking a hit or two.".[10] After the film's success, Rambin and the cast of The Hunger Games went on a The Hunger Games Convention Tour and also appeared in The World Is Watching: Making the Hunger Games.

Further film roles include Chasing Mavericks (2012), which is based on a real-life story about a surfer called Jay Moriarty. In the film, Rambin played the lead love interest, Kim Moriarty.[11] Rambin later starred in the music video for Green Day's "Stray Heart" which was officially released on November 7, 2012.

Rambin had a lead role in the fantasy film Percy Jackson: Sea of Monsters (2013), playing Clarisse La Rue, a hot-tempered, arrogant, large, and strong demigod (also the lead counselor of the Ares Cabin 5) and Percy's rival throughout the story.[12] In an interview with comingsoon.net, Rambin explained her casting and her time as a brunette, "Yeah, I was really lucky that Thor was able to see me as a brunette with this blonde hair. That's not typically the first thing that comes to mind when you look at me, I don't think. But when I put on that wig - luckily they didn't dye my hair - and change my physicality a lot... Nothing against brunettes - I still felt beautiful. But I felt a lot less inhibited, and I felt down to be a little more brash and powerful and strong. I kind of hid behind all this brown hair, and it gave me the power and confidence to verbally rip this one over here. ".[13] Her portrayal as Clarisse was met with mostly positive reviews.

Rambin had been cast as Daisy in the romantic comedy Two Night Stand (2014). Rambin appeared in the comedy drama, Walter (2014) as Kendall, the main love-interest of the title character. Rambin also appears in Seven Minutes (2014) as Kate. She was cast as Natalie in The Tomorrow People (2013-14), appearing in the final three episodes of the television series. Rambin later appeared in True Detective (2014-present) as Athena Bezzerides and will appear in the film I Am Michael (2015) as Catherine. In 2013, Rambin moved to New York City to study acting full-time at the Playhouse West Brooklyn Lab and is now a teacher and staff member at the school. In 2014, she landed the lead role of Kayla Canyon in the independently produced pilot, Dr. Del, opposite John Hawkes. Later that year, she was cast in the lead role of Fern Sreaves in Tatterdemalion, an independent film co-written and directed by Ramaa Moseley. In 2016, she was cast in a series regular role on the Hulu cult drama, The Path, opposite Aaron Paul and Michelle Monaghan. In 2017, Rambin was cast in the starring role of Kick Lanigan in the NBC Universal series, Gone, based on the novel One Kick by Chelsea Cain.

Rambin was previously engaged to producer Geoffrey James Clark.[14][15] She began dating True Blood (2008-14) actor Jim Parrack in the spring of 2014. The couple became engaged in August 2014.[16] and married October 10, 2015.[17][18] In March 2017, it was announced that the couple had split after less than two years of marriage.[19] Rambin filed and was granted an annulment, and the marriage was dissolved. Rambin has since referred to her relationship with Parrack as "abusive",[20] later revealing that he had cheated on her.[21]

As of April 2017, Rambin has been in a relationship with actor Tilky Jones.[22]

Rambin is a fashion enthusiast and has written several editorials on New York Fashion Week for Paper Magazine and Page Six. Rambin is very passionate about autism research and awareness as well as the humane treatment of animals.[23] Rambin is also involved with Surf for Life, an organization that creates educational and cultural development projects in coastal communities around the world.[23]