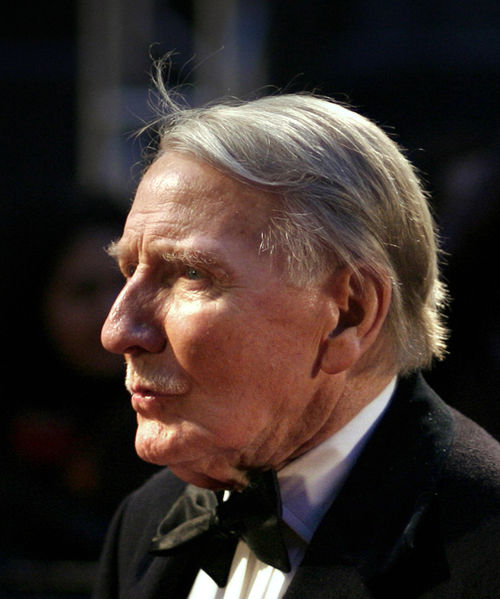 Leslie Samuel Phillips, CBE (born 20 April 1924) is an English actor who came to prominence in films in the 1950s, acting as a suave charmer with an exaggerated upper class accent, in the style of Terry Thomas. After a notable success in the Carry On films and the Doctor series, he moved away from comedy into character roles in the Harry Potter series and many TV sitcoms, as well as stage work.

Contrary to the impression given by his public persona, Phillips came from a background of poverty. He was born in Tottenham, then in Middlesex, England, the son of Cecelia Margaret (née Newlove) and Frederick Samuel Phillips,[2] who worked at Glover and Main, manufacturers of cookers in Edmonton; the "filthy, sulphurous" air of the factory gave Frederick a weak heart and edema, leading to his death at the age of 44. In 1931, the family moved to Chingford, then in Essex, where Phillips attended Larkswood Primary School.[3]

It was his mother who decided that Phillips should be sent to the Italia Conti Academy to receive elocution lessons to lose his natural cockney accent. At that time a strong regional accent was a major impediment to an aspiring actor. It proved to be an astute move and by the age of 14 Phillips was the family's main breadwinner, saving his mother from penury.

Phillips made his first film appearances as a child in the 1930s. He is the only actor still alive who performed at Pinewood Studios in its first week of opening in 1936. He also understudied for Binkie Beaumont and H. M. Tennent in the West End. In 1938, 14-year-old Leslie Phillips appeared with Graeme Muir in the West End play Dear Octopus where Muir was the juvenile lead. During the Second World War shows were frequently interrupted by air-raid sirens and Phillips recalls in his autobiography that "audiences would evaporate and head for cellars or Underground stations". At 16, Phillips played an uncredited market street urchin in 1940's The Thief of Bagdad.

Called up to the Army in 1942 Phillips rose to the rank of Lance-Bombardier in the Royal Artillery. Due to his acquired upper class accent, Phillips was selected for officer training at Catterick and duly commissioned as a Second Lieutenant in the Royal Artillery in 1943. In his autobiography he would recall that his anti-aircraft battery destroyed numerous German V1 flying bombs launched against the UK during the period. He was transferred to the Durham Light Infantry in 1944 but was later declared unfit for service after being diagnosed with a neurological condition that caused partial paralysis. He was initially sent to a psychiatric hospital in error but was then sent to the correct facility for treatment.

Demobbed as a lieutenant in December 1944, Phillips' acting career initially took in "the murkiest rat-infested old playhouses and music halls in the North of England". It was during the 1950s that he became known for playing amusing English stereotypes, including the 1955 TV series Robin Hood starring Richard Greene. His first lead role in a television serial was in the 1952 sitcom My Wife Jacqueline.[4] His seductive voice is his trademark as well as his catchphrases, "I say, Ding Dong" (originally the catchphrase of Phillips' character Jack Bell in Carry On Nurse), "Hello" and "Lumme!", which were partly, if not wholly, based on those of fellow cad actor Terry Thomas. The two appeared together in the pilot of "Nawks Ahoy!". A show very much of its time all recordings are now lost. He appeared in three of the early Carry On films (Carry On Nurse, Carry On Teacher and Carry On Constable). After Constable he told producer Peter Rogers that he did not wish to do any more Carry Ons, though he did return for Carry On Columbus in 1992. This made him, with June Whitfield, the longest-serving Carry On cast members. In the 1960s he took over from Dirk Bogarde in several of the 'Doctor' film comedies. Between 1959 and 1977 Phillips became familiar on radio with a leading role in The Navy Lark.

After his marriage to Angela Scoular in 1982, Phillips decided to move away from playing the kind of lecherous twits with suave chat-up lines which had characterised much of his previous work. Phillips has remained busy in both stage and television productions, along with character roles in films like Empire of the Sun (1987) directed by Steven Spielberg and Lara Croft: Tomb Raider (2001). Phillips also provided the voice for the Sorting Hat in the Harry Potter films appearing in Harry Potter and the Philosopher's Stone (2001) and Harry Potter and the Chamber of Secrets (2002) as well as reprising his role in the final film, Harry Potter and the Deathly Hallows Part 2 (2011). He has also appeared in British television sitcoms including Honey for Tea with Felicity Kendal and appeared in cameo roles in the popular series such as The Bill.

In 2006, he appeared in Hanif Kureishi's film Venus alongside Peter O'Toole and was nominated for a BAFTA for Best Supporting Actor in 2007 for his role as the veteran actor, Ian.[5]

Phillips, in conjunction with Jules Williams and Back Door Productions,[6] co-produces the Sky Arts series Living The Life[7] which is now in its third series.

Phillips married his first wife, actress Penelope Bartley, on 30 May 1948.[8] They had four children.

In 1962, Phillips started a romantic relationship with actress Caroline Mortimer, daughter of writer Penelope Mortimer and stepdaughter of John Mortimer, who was an understudy in a stage play in which Phillips starred. Phillips and Bartley separated at that point and were divorced in 1965.[8]

While on tour in Australia in 1981 he was notified that Penelope Bartley had died in a fire. Phillips elected to continue in the production and not attend her funeral. He has acknowledged that his family has never forgiven him for not coming back to attend the funeral.[8]

In 1982, Phillips and Scoular were married and remained together until her death on 11 April 2011. Scoular was suffering from bowel cancer and bipolar disorder and took her own life. Phillips was too ill to attend the inquest into Scoular's death three months later.[9]

He is a long-term fan of Tottenham Hotspur, and made an appearance on the pitch as part of the half-time entertainment during the team's home match against Swansea City on 1 April 2012.