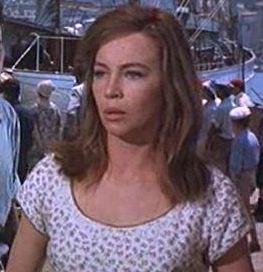 Leslie Claire Margaret Caron (born 1 July 1931) is a Franco-American actress and dancer who appeared in 45 films between 1951 and 2003. Her autobiography, Thank Heaven, was published in 2010 in the UK and US, and in 2011 in a French version. Veteran documentarian Larry Weinstein's Leslie Caron: The Reluctant Star premiered at the Toronto International Film Festival on 28 June 2016.[1]

Caron is best known for the musical films An American in Paris (1951), Lili (1953), Daddy Long Legs (1955), and Gigi (1958), and for the nonmusical films Fanny (1961), The L-Shaped Room (1962), and Father Goose (1964). She received two Academy Award nominations for Best Actress. In 2006, her performance in Law & Order: Special Victims Unit won her an Emmy for guest actress in a drama series. She is fluent in French, English, and Italian. She is one of the few dancers or actresses who have danced with Gene Kelly, Fred Astaire, Mikhail Baryshnikov, and Rudolf Nureyev.

Caron was born in Boulogne-sur-Seine, Seine (now Boulogne-Billancourt, Hauts-de-Seine), the daughter of Margaret (née Petit), a Franco-American dancer on Broadway, and Claude Caron, a French chemist, pharmacist, perfumer, and boutique owner.[2] While her older brother Aimery Caron became a chemist like their father, Leslie was prepared for a performing career from childhood by her mother.[citation needed]
Read more...

Caron started her career as a ballerina. Gene Kelly discovered her in the Roland Petit company "Ballet des Champs Elysées (fr)" and cast her to appear opposite him in the musical An American in Paris (1951), a role in which a pregnant Cyd Charisse was originally cast. This role led to a long-term MGM contract and a sequence of films which included the musical The Glass Slipper (1955) and the drama The Man with a Cloak (1951), with Joseph Cotten and Barbara Stanwyck. Still, Caron has said of herself: "Unfortunately, Hollywood considers musical dancers as hoofers. Regrettable expression."[3]

With her new son, Christopher, and co-star Maurice Chevalier on the set of Gigi (1958)

She also starred in the successful musicals Lili (1953), with Mel Ferrer; Daddy Long Legs (1955), with Fred Astaire, and Gigi (1958) with Louis Jourdan and Maurice Chevalier.

In the 1960s and thereafter, Caron worked in European films, as well. Her later film assignments included Father Goose (1964), with Cary Grant; Ken Russell's Valentino (1977), in the role of silent-screen legend Alla Nazimova; and Louis Malle's Damage (1992). Sometime in 1970, Caron was one of the many actresses considered for the lead role of Eglantine Price in Disney's Bedknobs and Broomsticks, losing the role to British actress Angela Lansbury.

Caron has continued to act, appearing in the film Chocolat (2000). During the 1980s, she appeared in several episodes of the soap opera Falcon Crest as Nicole Sauguet. She is one of the few actresses from the classic era of MGM musicals who are still active in film—a group that includes Rita Moreno, Margaret O'Brien, and June Lockhart. Her other later credits include Funny Bones (1995) with Jerry Lewis and Oliver Platt; The Last of the Blonde Bombshells (2000) with Judi Dench and Cleo Laine; and Le Divorce (2003), directed by James Ivory, with Kate Hudson and Naomi Watts.

On 30 June 2003, Caron traveled to San Francisco to appear as the special guest star in The Songs of Alan Jay Lerner: I Remember It Well, a retrospective concert staged by San Francisco's 42nd Street Moon Company. In 2007, her guest appearance on Law and Order: Special Victims Unit earned her a 2007 Primetime Emmy Award. On 27 April 2009, Caron traveled to New York as an honored guest at a tribute to Alan Jay Lerner and Frederick Loewe at the Paley Center for Media.[7]

For her contributions to the film industry, Caron was inducted into the Hollywood Walk of Fame on 8 December 2009 with a motion pictures star located at 6153 Hollywood Boulevard.[8] In February 2010, she played Madame Armfeldt in A Little Night Music at the Théâtre du Châtelet in Paris, which also featured Greta Scacchi and Lambert Wilson.[9]

In 2016, Caron appeared in the ITV television series The Durrells as the Countess Mavrodaki.

In September 1951, Caron married American George Hormel II, a grandson of the founder of the Hormel meat-packing company. They divorced in 1954.[10] During that period, while under contract to MGM, she lived in Laurel Canyon, in a Normandie style 1927 mansion, near the country store on Laurel Canyon Blvd.. One bedroom was all mirrored for her dancing rehearsals.

Her second husband was British theatre director Peter Hall. They married in 1956 and had two children: Christopher John Hall (TV producer) in 1957 and Jennifer Caron Hall, a writer, painter, and actress, in 1958.

Caron had an affair with Warren Beatty (1961). When she and Hall divorced in 1965, Beatty was named as a co-respondent and was ordered by the London court to pay the costs of the case.[11]

In 1969, Caron married Michael Laughlin, the producer of the film Two-Lane Blacktop; they divorced in 1980. Her son-in-law is Glenn Wilhide, the producer and screenwriter.

Caron was also romantically linked to Dutch television actor Robert Wolders from 1994 to 1995.[12]

From June 1993 until September 2009, Caron owned and operated the hotel and restaurant Auberge la Lucarne aux Chouettes (The Owls' Nest), located in Villeneuve-sur-Yonne, located about 130 km (81 mi) south of Paris.[13] Unhappy with the lack of work in France, Caron left Paris for England in 2013.

In her autobiography, Thank Heaven, she states that she obtained American citizenship in time to vote for Barack Obama for president.[14]