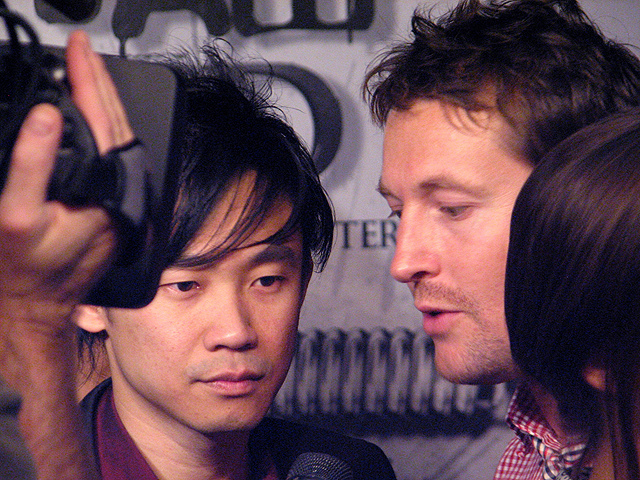 Whannell and Wan are the creators of the Saw franchise. Whannell wrote the first installment, co-wrote the second and third installments, was producer or executive producer for all the films, and appeared as the "Adam Stanheight" character in four of the installments.[1] He was also the writer of the Saw video game (2009), and co-writer of the 2014 film Cooties.

Whannell was born in Melbourne, Australia. He believes that he inherited his love of storytelling from his mother, and his fondness of filmmaking from his father, who was a cameraman in the television industry.
Read more...

A writer since childhood, Whannell worked as a reporter and film critic for several Australian television shows, including ABC's Recovery, a Saturday morning youth-oriented program that was hosted by Dylan Lewis. Whannell has described the show in a 2011 blog post:

The result was that instead of following the usual MTV ideal of what teenagers want in a TV show—“Hey kids, coming up next we’ve got some seriously WICKED windsurfing moves!!”—Recovery managed to tap into the so-called “alternative” movement that was in full swing at the time by giving teenagers what they actually want: genuine, unpolished anarchy.[2]

Whannell had originally auditioned for the host role, but was later employed as a reporter; Whannell's first interview was with Jackie Chan and he has stated that "Recovery is the best job I've ever had ..."[2]

Whannell appeared in Episode 4, Season 1 of the RMITV production Under Melbourne Tonight presents What's Goin' On There? on 10 June 1998[3]

In 2003, Whannell appeared in a minor role in The Matrix Reloaded, as well as in the video game Enter The Matrix as the character "Axel".

While in film school, Whannell met James Wan. Together, the two wrote a script for what would become Saw. After making a short film in 2003 to showcase the intensity of the Saw script, the feature film version, directed by Wan, was made in 2004 and became a low-budget sleeper hit. Whannell played Adam Stanheight in the film, one of the main characters. The popularity of Saw led to a sequel, Saw II, which was directed and co-written by Darren Lynn Bousman, and on which Whannell co-wrote and revised Bousman's original script, titled The Desperate. Whannell also served as an executive producer.

Around the same time, Whannell returned to collaborate with Wan; they wrote a film called Dead Silence, which Wan directed. It was originally slated for a 2006 release, but small problems with the title pushed the release date back to March 2007. In 2006, the duo composed the story for Saw III; Whannell wrote the screenplay for the third time. It was again directed by Bousman and was released on 27 October 2006. Whannell has a featured cameo, reprising his role as Adam. Saw III grossed $33,610,391[4] on its opening weekend, making around $129,927,001 worldwide (after 38 days in cinemas) and is currently the most successful Saw film to date.

Whannell's writing partner, Wan, was chosen to direct the film Death Sentence, the first feature film with their participation that they did not write themselves. Whannell has a small role as Spink in Death Sentence.

In 2008, Whannell took off his "writing hat" to perform alongside Nathan Phillips in Dying Breed, a low-budget Australian horror film about a team of zoologists exploring the Tasmanian wilderness to locate a creature thought extinct, the thylacine, aka Tasmanian tiger. Instead, they wander into the domain of cannibals who retain their ancestor Alexander Pearce's taste for human flesh, and become prey.

Before and during the production of Saw, Whannell sought medical treatment. "I was going through a bit of a tough time healthwise and suffering anxiety," says Whannell. "The anxiety manifested itself in physical ways. I was suffering headaches everyday for nearly a year. It was serious stuff and really started affecting my life." Spending time in a hospital inspired him to endow the lead antagonist of the Saw series, Jigsaw/John Kramer, with cancer. "It was weird to be 25 and sitting in a neurological ward and I'm surrounded by people who actually had brain tumors. It was very scary and it was my first proper look at mortality. I really wanted to get my health back and it really hammered home how important good health is. If you've got that, you've got everything."[5]

Whannell wrote the script for and acted in the 2011 paranormal thriller film, Insidious, which was directed by Wan and produced by Oren Peli.[6]

In relation to the Saw franchise, Whannell stated, also in 2011:

It's hard to say definitively, because we don't own the copyright for it. The producers could make 10 more if they wanted to. But, if we're to take them at face value, they told us that they were definitely done with it. They're pretty exhausted. They've been making one a year every year for the past seven years, so I think they need some time off.[7]

Media reports were published in mid-2013 in regard to Cooties, a film project that Whannell is an executive producer, actor and screenwriter for. The film's plot concerns an extreme virus that infects an isolated elementary school.[8] Whannell made his directing debut on the sequel Insidious: Chapter 3 (2015), which he also wrote.[9][10]

In 2014, Whannell expressed possible interest in returning to the Saw franchise;[11] however, in a November 2013 post on his personal blog, Whannell described a new chapter beyond his partnership with Wan, as the director had finally reached his goal of making epic-style blockbuster productions. Whannel explained: "Now, he’s off making the films he’s always wanted to make - the big ones. I have no doubt that his name will be added to that special club of film directors that he’s always admired very soon. I’m so happy for him, like a proud father. And that is why it is the end of an era." Whannell also added that he doesn't rule out collaborating with Wan again, but he felt like he needs to direct a film for the first time.[12]

Whannell's latest project as a writer-director was the science fiction body horror film Upgrade, which was released by Blumhouse Tilt and OTL Releasing in 2018 to positive reception.

Report a problem
Write to Leigh Whannell at FanPal • 2021