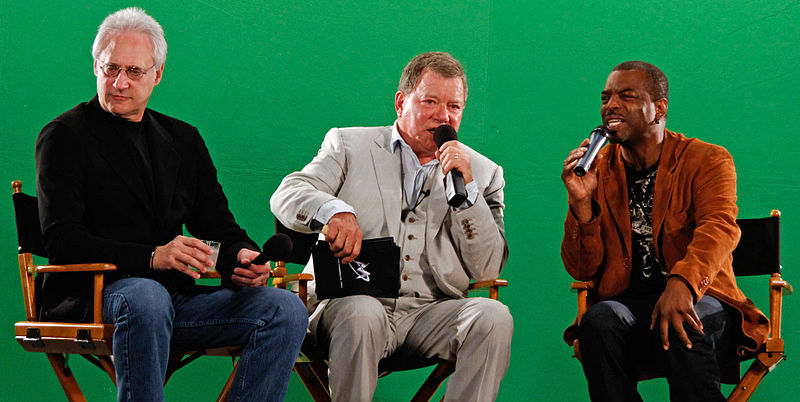 Levardis Robert Martyn "LeVar" Burton Jr. (born February 16, 1957) is an American actor, presenter, director and author. He is best known for his roles as the host of the long-running PBS children's series Reading Rainbow, Lt. Commander Geordi La Forge in Star Trek: The Next Generation and the young Kunta Kinte in the 1977 award-winning ABC television miniseries Roots. He has also directed a number of television episodes for various iterations of Star Trek, among other programs.

Burton was born to American parents at the U.S. Army Landstuhl Regional Medical Center in West Germany. His mother, Erma Gene (née Christian), was a social worker, administrator, and educator.[1] His father, Levardis Robert Martyn Burton, was a photographer for the U.S. Army Signal Corps at the time he was stationed at Landstuhl.[2][3][4] Burton and his two sisters were raised by his mother in Sacramento, California.[5]

Burton first appeared on television in a drama about a misunderstood deaf boy. LeVar Burton made his film acting debut in 1977 when he played Kunta Kinte in the ABC award-winning drama series Roots, based on the novel by Alex Haley. Burton's audition for the role of Kinte was the first of his professional career.[11] As a result of his performance, he was nominated for the Emmy for Best Actor in a Drama Series. Burton reprised the role of Kunta Kinte in the 1988 television film Roots: The Gift. When asked about the societal impacts of Roots, Burton is quoted as saying, "It expanded the consciousness of people. Blacks and whites began to see each other as human beings, not as stereotypes. And if you throw a pebble into the pond, you're going to get ripples. I think the only constant is change, and it's always slow. Anything that happens overnight is lacking in foundation. Roots is part of a changing trend, and it's still being played out."[12]

Burton played a role as a visitor to Fantasy Island, was a participant in Battle of the Network Stars, a guest of the Muppet Show's televised premiere party for the release of The Muppet Movie, and a frequent guest on several game shows. In 1986, he appeared in the music video for the song "Word Up!" by the funk/R&B group Cameo.

Burton accepted an invitation to host Rebop, a multicultural series designed for young people ages 9-15, produced by WGBH for PBS.

Burton was the host and executive producer of Reading Rainbow starting in 1983 for PBS.[13] The series ran for 23 seasons, making it one of the longest-running children's programs on the network. The series garnered over 200 broadcast awards over its run, including a Peabody Award and 26 Emmy Awards, 11 of which were in the Outstanding Children's Series category.[14][15] Burton himself won 12 Emmy awards as host and producer of the show.[16]

After Reading Rainbow went off the air in 2006, Burton and his business partner, Mark Wolfe, acquired the global rights to the brand and formed RRKIDZ, a new media company for children. Reading Rainbow was reimagined as an all new application for the iPad in 2012, and was an immediate success, becoming the number-one educational application within 36 hours. At RRKIDZ, Burton serves as co-founder and curator-in-chief, ensuring that the projects produced under the banner meet the high expectations and trust of the Reading Rainbow brand.[17]

On May 28, 2014, Burton and numerous coworkers from other past works started a Kickstarter campaign project to bring back Reading Rainbow. To keep with the changing formats to which young children are exposed, his efforts are being directed at making this new program web-based, following the success of the tablet application he helped create in recent years. His desire is to have the new Reading Rainbow be integrated into the classrooms of elementary schools across the country, and for schools in need to have free access.[18] The Kickstarter campaign has since raised over $5 million, reaching triple its goal in only three days.[19]

Star Trek: The Next Generation

In 1986, Gene Roddenberry approached Burton with the role of the then Lieutenant Junior Grade Geordi La Forge in the Star Trek: The Next Generation television series. The character is blind but is granted "sight" through the use of a prosthetic device called a VISOR worn over his eyes. La Forge started out serving as the USS Enterprise's helmsman, and as of the show's second season, had become its chief engineer. At the time, Burton was considerably better known than Patrick Stewart in the United States, due to his roles in Roots and Reading Rainbow. The Associated Press stated that Burton's role was essentially the "new Spock".[20]

Burton also portrayed La Forge in the subsequent feature films based on Star Trek: The Next Generation, beginning with Star Trek Generations (1994) through Star Trek: Nemesis (2002).

On television, Burton has helped dramatize the last days of Jim Jones's suicide cult in Guyana, the life and times of Jesse Owens, and the life of the nine-year-old Booker T. Washington. He portrayed Martin Luther King Jr. in the 2001 film Ali. He also portrayed Detroit Tiger Ron LeFlore in the television movie One in a Million, The Ron LeFlore Story.

In 1992, a clip of Burton's voice was sampled by DC Talk for the track "Time is..." on their album Free at Last. The sample is at the very end of the song, in which Burton can be heard saying: "Whoa, wait a minute." He has also lent his voice to several animated projects, including Kwame in the cartoon series Captain Planet and the Planeteers (1990-1993) and The New Adventures of Captain Planet (1993-1996), Family Guy, Batman: The Animated Series and Gargoyles. Burton is on the audio version of The Watsons Go to Birmingham: 1963 by Christopher Paul Curtis. Burton has been cast as voice actor for Black Lightning in Superman/Batman: Public Enemies DVD. In an ironic twist, Burton taped a recycling field trip for YouTube.

Burton appeared several times as a celebrity guest on the Dick Clark-hosted $25,000 and $100,000 Pyramids, from 1982 until 1988. Burton also was the strongest link in the special Star Trek episode of The Weakest Link. He defeated his final opponent Robert Picardo and won $167,500 for his charity, Junior Achievement of Southern California, a record for the show at that time and the largest amount won in any Celebrity Edition of the show (it was later surpassed by a $188,500 win in a "Tournament of Losers" episode).

He has made appearances in such sitcoms as Becker.

Burton is the host and executive producer of a documentary titled The Science of Peace, which was in production as of 2007. It investigates the science and technology aimed at enabling world peace, sometimes called peace science. The film explores some of the concepts of shared noetic consciousness, having been sponsored in part by the Institute of Noetic Sciences.[21]

He appeared in an April Fool's episode of Smosh pretending to have taken over the channel and making various edits at popular Smosh videos.[22]

He makes occasional appearances on This Week in Tech, where he is a self-proclaimed "nerd", and also participated in the Consumer Electronics Show 2010.[23]

In 2010, he made an appearance on Tim and Eric Awesome Show, Great Job! as the ghost of himself in the episode "Greene Machine".

In February 2011, Burton made an appearance as himself on NBC's Community in the episodes Intermediate Documentary Filmmaking and Geothermal Escapism.

In 2012, he had a recurring role as dean Paul Haley on the TNT series Perception. For the second season (2013), he became part of the regular cast.

In 2014, he had a guest appearance in an introduction section for the 200th episode of Achievement Hunter's show, Achievement Hunter Weekly Update (AHWU). In May 2014, he appeared as a guest on the YouTube channel SciShow, explaining the science behind double, tertiary, and quaternary rainbows. Late in 2014, he had another guest appearance on a 24-hour Extra Life, a fund-raising organization for Children’s Miracle Network hospitals, stream by Rooster Teeth.

Throughout the 1990s and early 2000s, Burton directed episodes for each of the various Star Trek series then in production. He has directed more Star Trek episodes than any other former regular cast member.[25]

His first theatrical film direction was Blizzard (2003), for which he received a "Best of Fest" award from the Chicago International Children's Film Festival, and a Genie Award nomination for his work on the film's theme song, "Center of My Heart".

Burton is on the board of directors for the Directors Guild of America.

LeVar Burton married Stephanie Cozart-Burton,[26] a professional make-up artist, in 1992. He and his wife currently live in Sherman Oaks, California.[9] LeVar Burton has two children, a daughter Michaela "Mica" with his wife, and a son, Eian Burton (born 1980) from a previous relationship.[27] Mica was an employee of Rooster Teeth's news division, The Know.[28] Burton is also a fan of English football club Arsenal.[29][30]

Burton serves on the board of directors for the AIDS Research Alliance, a non-profit, medical research organization dedicated to finding a cure for AIDS.[31]

Burton with Brent Spiner and William Shatner in July 2010