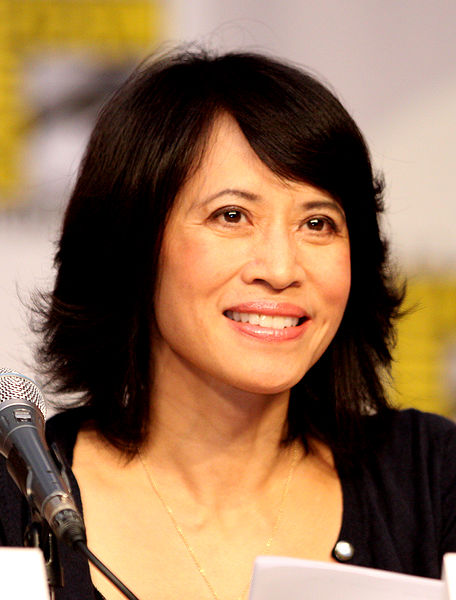 Lauren Tom (born August 4, 1961)[1] is an American actress and voice actress. Her roles include Lena St. Clair in The Joy Luck Club, Julie in the NBC sitcom Friends, Dot in the final season of Grace Under Fire, and the voices for both mother and daughter characters on three animated TV comedy series: on Futurama she voiced Amy Wong and her mother Inez, on King of the Hill as Minh and Connie Souphanousinphone. She portrays Celia Mack in the Disney Channel series Andi Mack.

Tom was born in the Chicago suburb of Highland Park, Illinois,[2] the daughter of Nancy (née Dare) and Chan Tom, Jr., who worked in the frozen food business.[1][3] She has a brother named Chip.[3] Their parents were born in Chicago, and their grandparents came from Hoiping, Kwangtung, China.[2] Raised in Highland Park, Tom was bullied as a child about her Chinese heritage, making her introverted and eventually inspiring her to study dance.[4]
Read more...

At the age of 17, Tom landed a spot with a touring company of A Chorus Line and was cast in the Broadway production of the show less than a year later in the role of Connie.[5] She won an Obie Award for her Off-Broadway acting and was cast in the Broadway shows Hurlyburly and Doonesbury. In Chicago she starred in the Goodman Theater's production of 'Tis Pity She's a Whore.[6]

Tom had several small roles in movies including Nothing Lasts Forever, Wall Street, See No Evil, Hear No Evil and Blue Steel. Her biggest role up until that point was as a waitress in the Robin Williams/Tim Robbins film Cadillac Man. This role led to being a guest on The Tonight Show Starring Johnny Carson.

Tom landed a lead role in the film The Joy Luck Club in 1993, which led to roles in other films such as When a Man Loves a Woman and North.

Since the mid-1990s, Tom has focused her work, primarily, in voiceover roles. She has appeared in a few live-action films, including the 2003 comedy Bad Santa and the critically acclaimed 2004 film In Good Company.

Lauren Tom's first role in television was that of Miko Wakamatsu on The Facts of Life. She subsequently appeared on The Equalizer, Catfish With Black Bean Sauce, thirtysomething, Quantum Leap, Chicago Hope, Homicide: Life on the Street, Grace Under Fire, Friends, The Nanny, The Middle, DAG, The Division, Monk, My Wife and Kids, Barbershop: The Series, Grey's Anatomy, The Closer and Men in Trees. She had an acting role in a bonus feature on the Futurama: Into the Wild Green Yonder DVD. She also had a supporting role on the 8th and 9th season of the drama series Supernatural as prophet Kevin Tran's mother, Linda Tran. in 2018, she appeared in the second season of the Amazon Prime drama series Goliath.

Tom began vocal work in the animated series Superman: The Animated Series playing Angela Chen. From there on, she voiced Dana Tan in Batman Beyond and had minor roles on Pinky and the Brain, Extreme Ghostbusters, The Zeta Project before landing her regular roles on King of the Hill, where she voiced Minh and Connie Souphanousinphone and later Futurama, where she voices Amy and Inez Wong.

Since first playing the character on stage in the 1983 Doonesbury musical, Tom has periodically voiced the character Honey Huan in media related to Doonesbury, most notably in a series of animated shorts satirizing the 2000 U.S. presidential election.

She has also voiced the villains Gizmo and Jinx on Teen Titans, Yan Lin, Susan, Alchemy on W.I.T.C.H., Tasumi on The Replacements, Jake's mom, Counselor Chang on American Dragon: Jake Long, and as Joo Dee on Avatar the Last Airbender. She also guest-starred in The Penguins of Madagascar as Chuck Charles's co-anchor, Bonnie Chang, in "Gator Watch" and "All Tied Up With a Boa".

Recently in 2010, she did the voice of Song, Bai Li and Ming on the animated series, Kung Fu Panda: Legends of Awesomeness and also played the role of Jessica in the animated film, Scooby-Doo! Camp Scare.

Other animated movies Tom has voiced include Mulan II, Kim Possible: The Secret Files, Kim Possible Movie: So The Drama, Batman Beyond: Return of the Joker and the four Futurama movies: Bender's Big Score, The Beast with a Billion Backs, Bender's Game and Into the Wild Green Yonder.

She voiced Li Li Stormstout in World of Warcraft: Mists of Pandaria[7] and played Hayaku on an episode of Turbo FAST.[8]

Report a problem
Write to Lauren Tom at FanPal • 2020