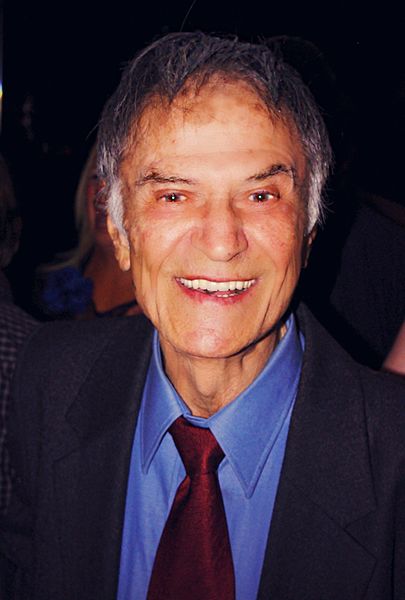 Lawrence Samuel Storch (born January 8, 1923) is an American comedian, actor and voice artist best known for his comic television roles, including voice-over work for cartoon shows, such as Mr. Whoopee on Tennessee Tuxedo and His Tales, and his live-action role of the bumbling Corporal Randolph Agarn on F Troop.

Storch was born in New York City, a son of Alfred Storch, a realtor, and his wife Sally (née Kupperman) Storch, a telephone operator.[1] He attended DeWitt Clinton High School in the Bronx with Don Adams, who remained his lifelong friend. Due to hard times in the Great Depression, Storch said he never graduated from high school, instead finding work as a stand-up comic for $12 a week opening for bandleader Al Donahue at the band shell in Sheepshead Bay.[2] He served in the United States Navy during World War II on the submarine tender USS Proteus with Tony Curtis.[3]
Read more...

Storch was originally a stand-up comic. This led to guest appearances in dozens of television series, including, Car 54, Where Are You?, Hennesey, Get Smart, Sergeant Bilko, Columbo, CHiPs, Fantasy Island, McCloud, Emergency!, The Flying Nun, Alias Smith and Jones, The Alfred Hitchcock Hour, That Girl, I Dream of Jeannie, Gomer Pyle, Gilligan's Island, The Doris Day Show, The Persuaders, Love American Style, and All in the Family.

His most famous role was the scheming Corporal Randolph Agarn on the situation comedy F-Troop (1965-1967), with Forrest Tucker, Ken Berry and Melody Patterson.

In 1975, Storch co-starred with Bob Burns (who was disguised as a gorilla) and Forrest Tucker on the short-lived but popular Saturday morning children's show The Ghost Busters. He also appeared on The Love Boat, was Al Bundy's childhood hero on Married... with Children, and was a semi-regular on Car 54, Where Are You?. He co-starred on the short-lived series The Queen and I.

Storch appeared on many variety shows, including Sonny and Cher, Laugh-In, Hollywood Squares, Playboy After Dark and The Hollywood Palace, with several appearances on The Ed Sullivan Show, The Tonight Show with Johnny Carson and The Steve Allen Show. Jackie Gleason personally asked Storch to fill in for him in the summer of 1953 while Gleason was on hiatus. This led to the 10-episode The Larry Storch Show with guest stars including Janet Blair, Risë Stevens, Dick Haymes and Cab Calloway.

As an impressionist and voiceover actor

An impressionist, Storch does hundreds of voices and dialects ranging from Muhammad Ali to Claude Rains. This has proved useful for cartoons. He has voiced characters in numerous television and film animations including The Batman/Superman Hour, The Pink Panther Show, Groovie Goolies, The Inspector, The Brady Kids, Cool Cat, Koko the Clown, Treasure Island, Return from Oz, Scooby-Doo and Tennessee Tuxedo.

Storch had worked with Mel Blanc and June Foray at Warner Bros.-Seven Arts, voicing characters such as titular Merlin the Magic Mouse and Cool Cat. He was the first actor to voice Batman's arch enemy, The Joker, in The Adventures of Batman segments produced by Filmation animation in the late 1960s. Storch continued his association with Filmation as a voiceover actor in other series the company produced including Journey Back to Oz where he voiced Aunt Em and Uncle Henry's farmhand Amos. He provided the Tin Man's speaking voice while Danny Thomas provided the character's singing voice.[citation needed]

After success in television and films, Storch returned to the New York stage, after having first performed on the Broadway stage in the 1950s.[4] He received rave reviews for the Off-Broadway production of Breaking Legs. Co-starring Philip Bosco and Vincent Gardenia, the show extended several times before going on the road. Storch appeared in the Broadway productions of Porgy and Bess (which Larry considers his favorite), Arsenic and Old Lace with Jean Stapleton, and Annie Get Your Gun with Reba McEntire. He toured the United States and Europe with Porgy and Bess.

In 2004, he was in Sly Fox with Richard Dreyfus and his old friend Irwin Corey. Larry, then 81, and "Professor" Corey, 90, did eight shows a week. In March 2008, Storch celebrated his 50th anniversary performing on Broadway. His first Broadway appearance had been Who was That Lady I Saw You With, later made into a 1960 film starring Dean Martin and Tony Curtis, with Storch appearing.

In the summer of 2012, Storch appeared in a benefit performance of Love Letters with actress Diana Sowle (Best Known for her role as Mrs Bucket in the original Willy Wonka film) in Farmville, Virginia to benefit The Tom Mix Rangers.[citation needed]

He recorded a comedy LP Larry Storch at The Bon Soir released by Jubilee in the 1960s. Other records include Larry Storch Reads Philip Roth's Epstein, Larry Storch Pooped/Eighth Wonder of the World, Larry Storch / I'm Walkin. In less than two years' time, Storch appeared on three TV Guide covers, all with various F-Troop co-stars, Storch being the only one featured on all three covers. He also appeared on the cover of TV Guide in 2000.

Storch is now "semi-retired". He received the 2013 Barrymore Award for Lifetime Achievement in Film and TV from the Fort Lee Film Commission. The award was presented to him on December 31, 2013. Guests of the evening included Larry's friend, boxing legend Jake LaMotta; Larry's stepdaughter, Emmy Award-winning filmmaker and author June Cross; and early rock and roller Tom Austin from the Royal Teens (co-author of the million-selling hit "Short Shorts"). On May 19, 2014, Storch was honored by the Friars Club in New York City with its Sunshine Committee Award after performing at the committee benefit.

Storch married actress Norma Catherine Greve on July 10, 1961. They remained married until her death at the age of 81 on August 28, 2003. Both briefly appeared in the made-for-television movie The Woman Hunter (1972). He has three children: a stepson, Lary May; a daughter, Candace Herman, the result of a brief encounter with his future wife, born in 1947 and given to the adoption process (later reunited); and a stepdaughter, June Cross, born in 1954 to Norma and Jimmy Cross ("Stump" of the song-and-dance team "Stump and Stumpy").[5]

In an episode of the sitcom Married... with Children, "Something Larry This Way Comes" (aired March 12, 1995), Storch plays himself. Kelly Bundy attends the "Larry Storch School of Acting". Plays by the students are performed in abandoned theatres which the audience sneak into through building cracks and boarded up entryways. In that same episode, Al Bundy's boss Gary reveals her disdain for Storch, saying that she attended the "Larry Storch School of Heating and Air Conditioning Repair", an apparently fly-by-night institution. When Storch himself walked into the shoe store, Gary knocked him out.

An episode of Animaniacs titled "The Sound of Warners", features a banner that says "Larry Storch Days; Nov 13 & 14".

The band Splitsville paid tribute to Storch in their song "Come Back to the Five and Dime, Larry Storch, Larry Storch".

Fort Lee, New Jersey Mayor Mark Sokolich named Storch as honorary Mayor for a Day on June 1, 2014. "Larry has vowed that as mayor of Fort Lee he will mount his horse and charge to the bridge and nobody’s going to take our lanes," said Sokolich, referring to the Fort Lee lane closure scandal. Storch had previously been honored by the local film commission for performing at the Riviera Nightclub, which had closed 60 years earlier.[8]

A Golden Palm Star on the Palm Springs, California Walk of Stars was dedicated to Storch in 2014.[9]

Passaic, New Jersey Mayor Alex Blanco named Storch as an honorary citizen of Passaic on September 13, 2016, upon the occasion of Storch's first visit to the hometown of his fictional F Troop character. "I’ll remember this group today more than a crowd at Yankee Stadium," Storch remarked. During a meeting of the Passaic County freeholders, he received a Distinguished Service Medal to recognize his World War II service.[10]