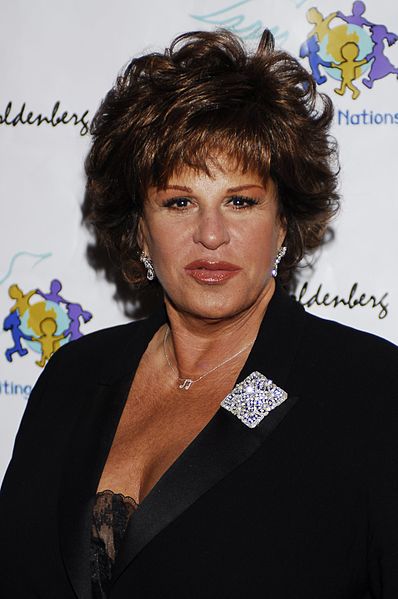 Lainie Kazan (born May 15, 1940)[1] is an American actress and singer. She was nominated for the Primetime Emmy Award for Outstanding Guest Actress in a Drama Series for St. Elsewhere and the 1993 Tony Award for Best Featured Actress in a Musical for My Favorite Year. She was nominated for a Golden Globe Award for her role in My Favorite Year (1982). Kazan played Maria Portokalos in My Big Fat Greek Wedding and its sequel film My Big Fat Greek Wedding 2.

Kazan was born Lainie Levine in Brooklyn[2][3] as the daughter of Carole (née Kazan) and Benjamin Levine.[4] Kazan's mother Carole was of Sephardic Jewish extraction, her family having originally come from Jerusalem;[5][6] and her father Benjamin, who was of Russian Ashkenazi Jewish descent, worked as a gambling bookmaker.[7][8] Kazan has described her mother as "neurotic, fragile and artistic."[9][10][8] She attended Brooklyn's Erasmus Hall High School, where she was a senior while Barbra Streisand, whom she would later understudy, was a sophomore. Kazan went on to graduate from Hofstra University in Hempstead, New York, on Long Island, in 1960. While at Hofstra, Kazan appeared in school musicals written and directed by a classmate, future Academy Award-winning director Francis Ford Coppola.[2]
Read more...

Kazan made her Broadway debut in 1961 with the musical The Happiest Girl in the World. She appeared the following year in another musical, Bravo Giovanni, and understudied Barbra Streisand for the lead role of Fanny Brice in Funny Girl (1964). When Streisand herself could not perform due to a throat condition, Kazan took her place in both a matinee and evening performance for one day of the show's run.[2] Her popularity increasing, Kazan posed nude for the October 1970 issue of Playboy, which was reused in Pocket Playboy #4, issued in 1974. Her appearance in the magazine opened the door for her to headline at, and operate, two different Playboy Jazz Clubs. Overseen by Hugh Hefner himself, the clubs were called "Lainie’s Lounge East" and "Lainie's Lounge West," each on opposite coasts, with the one located in Manhattan and the other in Los Angeles. Her Playboy photographs inspired the look of Jack Kirby’s DC Comics superheroine, Big Barda.[11]

Along with appearing in numerous supper clubs across the country, Kazan guest-starred on Dean Martin’s variety series twenty-six times. Other television work includes a recurring role as Aunt Frieda on the Fran Drescher sitcom The Nanny, the mother of Kirstie Alley's character on Veronica’s Closet, and such guest roles as one on St. Elsewhere, that resulted in an Emmy nomination. Her other television work has included The Paper Chase, Touched by an Angel, and Will & Grace as Grace's Aunt Honey.

Kazan played Maria Portokalos, the mother of Toula Portokalos (Nia Vardalos) in the films My Big Fat Greek Wedding and My Big Fat Greek Wedding 2. Following the first film in the franchise, Kazan was featured in My Big Fat Greek Life, a short-lived series based on the film. Other recent film work includes the mother of Adam Sandler’s character in I Now Pronounce You Chuck and Larry. Although the scene was deleted in the feature film, it is included on the DVD in the special features section. Kazan had appeared as the once-renowned singer Ava St. Clair with Chuck and Larry co-star Kevin James in two episodes of The King of Queens, a TV series with James in the lead role.

A life member of The Actors Studio,[12] Kazan returned to Broadway to recreate her film role for the musical adaptation of My Favorite Year, earning a Tony Award nomination for her performance. She completed a stint in The Vagina Monologues. She has also appeared in regional productions of A Little Night Music, Man of La Mancha, Gypsy, Who’s Afraid of Virginia Woolf?, Hello, Dolly!, and Fiddler on the Roof, among others. In 1984, she made a guest appearance on the Faerie Tale Theatre episode “Pinocchio” as Sophia the Blue Fairy.

In the Ugly Betty episode "Fire and Nice," Kazan played Dina Talercio, the mother of Bobby (Adam Rodriguez), who becomes the character’s brother-in-law.[13] In 2010, Kazan joined the cast of Desperate Housewives for Season 7. She played the role of a self-employed business owner and neighbor to Susan.[14]

After meeting musical director-arranger Peter H.B. Daniels on the Broadway musical Funny Girl, in which Kazan was a cast-member and he was associate orchestra conductor, the two began a five-year relationship. They married sometime after the 1971 birth of their daughter, Jennifer.[15][16][2] The marriage did not last, and Kazan was single again by 1976.[15]

In the mid-1970s, Kazan was diagnosed with deep vein thrombosis (DVT). Since then, she has dedicated time to public education about DVT.[17][18] On April 9, 2016, Kazan was injured in a head-on collision. Kazan was driving her sport utility vehicle when the collision occurred in front of a Greek restaurant in Sherman Oaks, California. Kazan was hospitalized following the crash.[19][20]

Beginning in 2012, Kazan became an adjunct professor at UCLA, teaching acting classes and directing her students in drama-department production. She has served on the boards of the Young Musicians’ Foundation, AIDS Project LA, and B'nai Brith, the California Jazz Foundation, and her alma mater, Hofstra University.[21]