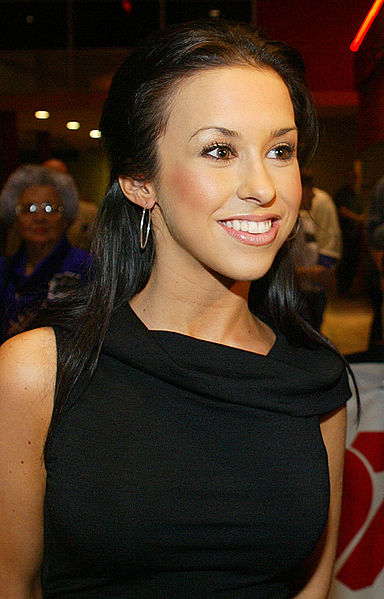 Lacey Nicole Chabert (/ʃəˈbɛr/; born September 30, 1982) is an American actress, voice actress, and singer. She first gained prominence as a child actress on television for her role as Claudia Salinger in the television drama Party of Five (1994-2000).[1] She has also provided the voice of Eliza Thornberry in the animated series The Wild Thornberrys (1998-2004) and two feature films, Meg Griffin during the first production season of the animated sitcom Family Guy,[2] and superheroine Zatanna Zatara in various pieces of DC Comics-related media. In film, she has appeared in Lost in Space (1998), Not Another Teen Movie (2001), and Daddy Day Care (2003), and had leading roles as Gretchen Wieners in Mean Girls (2004), Meg Cummings in Dirty Deeds (2005), and Dana Mathis in the horror remake Black Christmas (2006).

Chabert has also appeared in 12 Hallmark Channel movies,[3] saying "I love working for Hallmark. They've been so good to me. I have friends there now. I'm proud of their movies and the message of their movies."[4]

Chabert was born in Purvis, Mississippi, to Julie (née Johnson) and Tony Chabert. Her father is of Cajun, Italian, and English descent; he worked as a maintenance operations representative for an oil company.[5][6] Her mother has English, Scottish, and remote Italian ancestry.[7] Chabert has a younger brother named T.J., and two older sisters, Chrissy and Wendy. She was "World's Baby Petite" in the "World's Our Little Miss Scholarship Competition" in 1985.[8] In 1992 and 1993, she played young Cosette in the Broadway production of Les Misérables.
Read more...

Chabert played the role of Cosette in "Les Miserables" on Broadway before taking the role of Claudia Salinger in Party of Five. Chabert made her big screen debut in the late 1990s, starring as Penny Robinson in the space thriller Lost in Space (1998). Since then, she has been the voice of Eliza Thornberry in the animated series The Wild Thornberrys, and has voiced Eliza in two films, The Wild Thornberrys Movie (2002) and Rugrats Go Wild (2003). She then had a supporting role in the parody film Not Another Teen Movie as Amanda Becker. She provided the voice for the title character's daughter Aleu in Balto 2: Wolf Quest (2002) and she provided the voice of Meg Griffin for the first production season of the animated sitcom Family Guy (1999), after which Mila Kunis took over the role.[2][9]

Chabert played the title role in The Brooke Ellison Story, a movie produced and directed by Christopher Reeve, based upon a real-life quadriplegic woman who overcame many obstacles to graduate from Harvard University. She starred in Mean Girls (2004) and the television film Hello Sister, Goodbye Life (2006) on ABC Family. She appeared in a 2006 remake of Black Christmas. She appeared in an episode of Ghost Whisperer opposite former Party of Five costar Jennifer Love Hewitt. She performed the voice of Princess Elise from the game Sonic the Hedgehog for the PlayStation 3 and Xbox 360. She also voiced Gwen Stacy in the animated series The Spectacular Spider-Man.

Chabert, along with Lindsay Lohan, Rachel McAdams, and Amanda Seyfried, won the 2005 MTV Movie Award for Best On-Screen Team for Mean Girls. She won both the 1997 and 1998 The Hollywood Reporter Annual YoungStar Award for Best Performance by a Young Actress in a Drama TV Series for Party of Five, and had been nominated three other times for work from 1999 to 2000.[7] The YoungStar awards honor the best film, TV, and music performances made exclusively by six- to 18-year-olds.

In 2007, Chabert starred in the pilot episode of the Fox comedy "The Hot Years", which revolved around the lives of four female friends who live together. The pilot was not ordered to series by Fox.[10]

From 2013-2014, Chabert had a recurring role on the ABC Family sitcom Baby Daddy as Dr. Amy Shaw.[12] After working in various TV movies during this time, she opened 2018 with an original Hallmark movie that premiered as part of the Valentine's Day Countdown.

Chabert has spoken publicly about her faith and said she related to her character in Christian Mingle.[15]