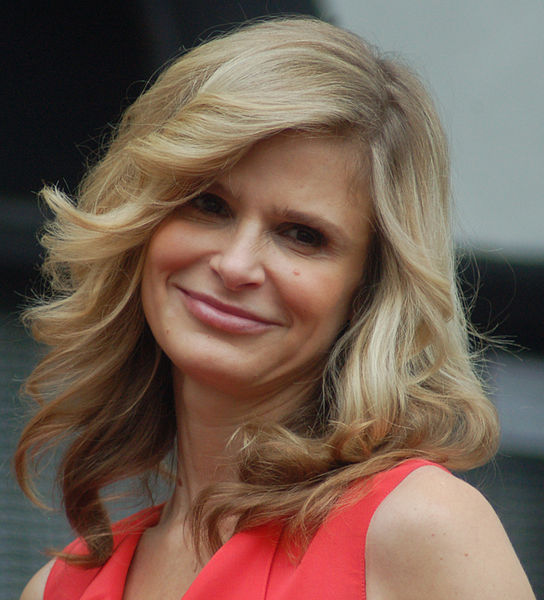 Kyra Minturn Sedgwick Bacon (born August 19, 1965)[2] is an American actress and producer. She is best known for her starring role as Deputy Chief Brenda Leigh Johnson on the TNT crime drama The Closer. Sedgwick's role in the series won her a Golden Globe Award in 2007 and an Emmy Award in 2010. The series ended on August 13, 2012, following the completion of its seventh season. She is also known for her recurring role as Madeline Wuntch on the sitcom Brooklyn Nine-Nine.

Sedgwick was born in New York City, the daughter of Patricia (née Rosenwald), a speech teacher and educational/family therapist, and Henry Dwight Sedgwick V, a venture capitalist.[1][3][4] Her father was Episcopalian and of English heritage, and her mother was Jewish.[5] Sedgwick has identified herself as Jewish[6][7] and has stated that she participates in Passover seders.[8]

On her father's side, she is a descendant of Judge Theodore Sedgwick, Endicott Peabody (the founder of the Groton School), William Ellery (a signer of the Declaration of Independence), Samuel Appleton, John Lathrop (American minister) (1740-1816), of Boston, Massachusetts, and is the great-granddaughter of Henry Dwight Sedgwick III, thus the corresponding niece to his brother Ellery Sedgwick, owner/editor (1908-1938) of The Atlantic Monthly. Sedgwick is also a sister of actor Robert Sedgwick, half-sister of jazz guitarist Mike Stern, the first cousin once removed of actress Edie Sedgwick, and a niece of the writer John Sedgwick.[9] She is also the aunt of R&B/pop singer George Nozuka and his younger singer-songwriter brother Justin Nozuka (their mother, Holly, is Sedgwick's half-sister).

Sedgwick went to high school with Matthew Broderick. When both were guests on WWHL, both revealed they actually dated on and off. Broderick even went as far to say he knows Sedgwick's mother well.

Sedgwick graduated from Friends Seminary and attended Sarah Lawrence College[1] before transferring to the University of Southern California, where she graduated with a theater degree.[11]

Sedgwick made her debut at the age of 16 on the television soap opera Another World as Julia Shearer, troubled granddaughter of Liz Matthews. In 1988, she made a strong impression in a TV version of Lanford Wilson's Lemon Sky. During the 1990s, she appeared in several Hollywood movies, including Singles (1992), Heart and Souls (1993), Something to Talk About (1995), and Phenomenon, in which she played the love interest of John Travolta's character.[10] She starred in the Emmy Award-winning[12] 1992 made-for-TV film Miss Rose White as a Jewish immigrant who comes to terms with her ethnicity. She played the parts of Mae Coleman in 2003's Secondhand Lions and Stella Peck in the 2007 film The Game Plan. She also starred alongside her husband Kevin Bacon in the 2004 film The Woodsman. She dubbed the voice of Batwoman in the animated movie Batman: Mystery of the Batwoman.

Sedgwick starred in the television series The Closer from 2005 to 2012. In 2007, she began earning roughly US$300,000 per episode.[13] Over the life of the series, she was nominated for and won several awards for her starring role as Deputy Chief Brenda Leigh Johnson. She received a Golden Globe award in 2007 for her performance as lead actress and won a Primetime Emmy Award in 2010. In 2009, Sedgwick was awarded a star on the Hollywood Walk of Fame for Television.[14]

The Closer ended on August 13, 2012,[15] following the completion of its seventh season; the series's broadcaster, TNT, said that the decision to retire the series was made by Sedgwick.[16] A sequel series starring most of the same cast called Major Crimes continues in its place.[17]

Sedgwick produced the television series Proof for TNT which debuted in 2015 for one season.[18] She is also featured in the TV series ‘Brooklyn Nine-Nine’ portraying the character of ‘Commissioner Wuntch’.

Sedgwick married actor Kevin Bacon on September 4, 1988.[1] Sedgwick learned in 2011, via her appearance on the U.S. TV show Finding Your Roots with Henry Louis Gates, that Bacon and she are 9th cousins, once removed.[19][20]

Sedgwick and Bacon lost part of their savings in the Ponzi scheme of infamous swindler Bernard Madoff.[23][24]