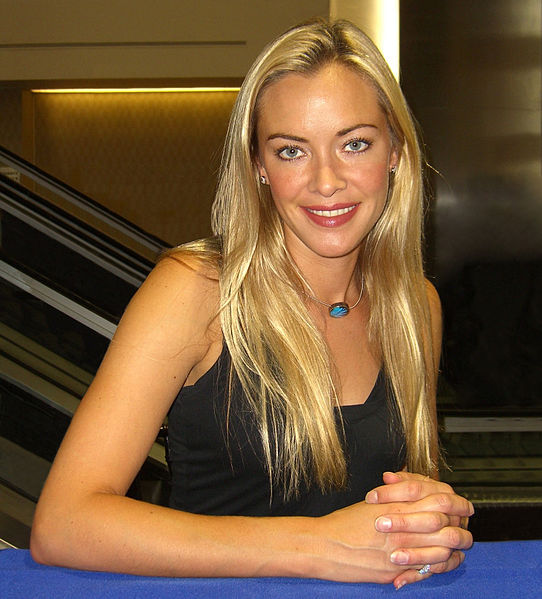 Loken was born in Ghent, New York, the daughter of Rande (née Porath), a model, and Merlin "Chris" Loken, a writer and apple farmer.[1][2] She is of half German and half Norwegian ancestry.[3] Her parents were from Wisconsin.[4][5][6] She grew up on her parents' fruit farm in Upstate New York.
Read more...

After her mother encouraged her to become a model,[7] Loken participated at the 1994 Elite Model Look in which she placed 3rd runner-up.[8] Loken started her acting career in 1994 as the third actress to play Danielle 'Dani' Andropoulos on an episode of As the World Turns.[9] She later appeared in several television shows and films, including regular appearances on the television shows Philly, Unhappily Ever After and Boy Meets World.

In 1998, Loken starred in Mortal Kombat: Conquest as Taja. She played the cyborg T-X (Terminatrix) in the 2003 movie Terminator 3: Rise of the Machines.[10] In 2004, she appeared in a German television movie, Die Nibelungen (also known as "Dark Kingdom: The Dragon King" or "Sword of Xanten"), which aired as a 2-part mini-series and set a ratings record. She starred as the leading character in the 2006 film version of the video game BloodRayne, and appeared in director Uwe Boll's film version of the video game Dungeon Siege, called In the Name of the King.

She appeared in 10 episodes of the fourth season of The L Word, which debuted in January 2007. Additionally, she starred as the title character in the Sci-Fi Channel's series Painkiller Jane which aired from April to September 2007. In December 2011, Loken appeared in the fifth-season finale of the USA Network TV series Burn Notice as CIA agent Rebecca Lang, and would reprise that role in three sixth-season episodes during mid-2012.

In 2014, she starred in the action movie Mercenaries, alongside Cynthia Rothrock, Brigitte Nielsen, Vivica A. Fox, Zoë Bell and Nicole Bilderback.

Loken has a sister named Tanya.[11]

She stated in an interview with Curve magazine: "I have dated and have had sex with men and women, and have to say that the relationships I have had with certain women have been much more fulfilling, sexually and emotionally, than of those with certain men... I connect with an aura, with energy. And if the person with whom I connect happens to be a female, that's just the way it is. That's what makes my wheels turn."[12]

On January 17, 2008, Loken announced on her website that she had become engaged to her Painkiller Jane co-star Noah Danby. The couple were married at her family's farm on May 10, 2008.[13] In an interview published on November 16, 2009, she announced that she had separated from Danby and was dating a woman.[14]