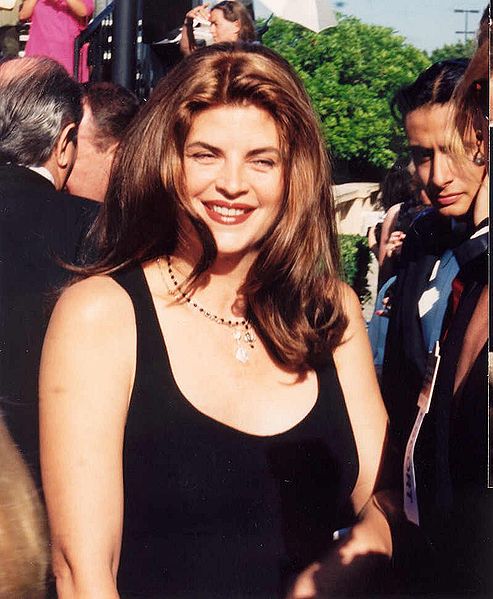 Kirstie Louise Alley (born January 12, 1951) is an American actress and spokesmodel. She first achieved recognition in 1982, playing Saavik in the science fiction film Star Trek II: The Wrath of Khan. Alley is best known for her portrayal of Rebecca Howe on the NBC sitcom Cheers, in which she starred from 1987 to 1993, winning the Primetime Emmy Award for Outstanding Lead Actress and Golden Globe for Best Actress in 1991. From 1997-2000, she starred as the title character on the sitcom Veronica's Closet, for which she received additional Emmy and Golden Globe Award nominations.

In 1997, Alley received a further Emmy nomination for her work in the crime drama series The Last Don. In 2005, she played a fictionalized version of herself on Showtime's Fat Actress. She later appeared on the reality show Kirstie Alley's Big Life (2010), and was a contestant on the twelfth season of Dancing with the Stars (2011-12), finishing in second place. In 2013, she returned to acting with the title role on the short-lived sitcom Kirstie, and in 2016 joined the second season of the Fox comedy horror series Scream Queens, playing Ingrid Hoffel.

In 2018, she finished as runner-up in season 22 of the British reality series Celebrity Big Brother.

Kirstie Alley was born in Wichita, Kansas, the daughter of Lillian Mickie (née Heaton), a homemaker, and Robert Deal Alley, who owned a lumber company.[1][2] She has two siblings, Colette and Craig. Alley attended Wichita Southeast High School, graduating in 1969.[3] She attended college at Kansas State University, dropping out after her sophomore year.[3] After moving to Los Angeles to pursue Scientology and work as an interior designer, Alley appeared as a contestant on the popular game show Match Game in 1979 (not during the "Match Game '79" season). She won both rounds, winning $500 in the first round and $5500 in the second round.[4] She also appeared on the game show Password Plus in 1980. In 1981, a car accident caused by a drunk driver killed her mother and left her father seriously injured. Her father eventually recovered.[3]
Read more...

Before becoming an actress, Alley was an interior designer, as she announced during her appearances as a contestant on the game shows Match Game and Password Plus. She made her movie debut in 1982 in Star Trek II: The Wrath of Khan, playing the Vulcan Starfleet officer Lieutenant Saavik, but chose not to reprise that role in the next two sequels, saying later that she was offered less money than for Star Trek II. In the years following she starred in a number of smaller films, including One More Chance, Blind Date and Runaway. In 1985, she played Virgilia Hazard in the ABC miniseries North and South, books I and II.

In 1987, Alley starred alongside Mark Harmon in the comedy film Summer School. The film was a box office success, grossing over $35 million in the United States.[5] Later that year she joined the cast of NBC sitcom Cheers, replacing Shelley Long and remaining with the show until its eleventh and final season.[6] In 1989, Alley starred with John Travolta in Look Who's Talking, the film grossed over $295 million worldwide. They then went on to make two other films centered around the same theme, Look Who's Talking Too and Look Who's Talking Now![7]

Alley has won two Emmy Awards[8] during her career. Her first two nominations for her work on Cheers did not win her the award, but her third, in 1991, did. In her speech, she thanked then-husband Parker Stevenson, calling him "the man who has given me the big one for the last eight years".[9] She won her second Emmy for 1994 television film David's Mother. For her contributions to the film industry, Alley received a motion pictures star on the Hollywood Walk of Fame at 7000 Hollywood Boulevard in 1995.[10]

TV Land aired a sitcom that centered on Alley as a Broadway star and a new parent. It was titled Kirstie, and reunited her with former Cheers co-star Rhea Perlman and Seinfeld star Michael Richards. The series premiered on December 4, 2013,[11] and ran for one season before it was canceled, five months after ending its freshman run.[12]

In February 2011, Alley was announced as a contestant on Dancing with the Stars. She was partnered with Maksim Chmerkovskiy. Their first dance, a cha-cha-cha, earned them the second-highest score, 23 points of a possible 30. In May, Alley and Chmerkovskiy performed their final dance, also a cha-cha-cha, which earned them a perfect score of 30 out of 30. Alley finished the competition in second place, behind NFL Super Bowl champion Hines Ward. She also took part in the 15th season of Dancing with the Stars for a second chance to win the mirrorball trophy[13] again with Maksim Chmerkovskiy. They were the seventh couple eliminated from the competition.

Alley dated Bob Alley in high school. They married in 1970. Her husband had the same name as her father.[14] They divorced seven years later as their career paths diverged.[15] Alley was married to her second husband, Parker Stevenson, on December 22, 1983. They divorced in 1997. Alley and Stevenson shared custody of their two children, William True and Lillie Price.[16] On June 21, 2016, Alley announced she was a grandmother after her son William welcomed a son of his own, Waylon Tripp Parker.[17]

She has a house in Islesboro, Maine.[18]

Alley appeared on The Dr. Oz Show on September 17, 2012, where she admitted that she started gaining weight in late 2003. Alley claimed she spent her whole life eating obsessively without gaining weight, and only noticed a change in her body after she went into early menopause in 1992.[19]

In September 2011, Alley announced that she had lost 100 pounds (45 kg) using weight loss products from Organic Liaison, a company she had founded in 2010.[22] In 2012, she faced a class-action lawsuit alleging false advertising; the suit claimed that her weight loss was the result of exercise, including training for the TV show Dancing With the Stars, not Organic Liaison products. She settled the suit in 2013, agreeing to remove the term "Proven Products" from packaging, issue a disclaimer on the brand's website that it is a "calorie-based weight-loss product", and pay a $130,000 settlement.[23][24]

In April 2014, she reunited as a spokesperson with Jenny Craig; the Organic Liaison product line was acquired by Jenny Craig's parent company, and subsequently integrated into Jenny Craig's product line.[23] In January 2015, Alley claimed that, since starting the Jenny Craig weight-loss program again, she had lost 50 pounds (23 kg).[25]

Alley was raised as a Methodist, but became a member of the Church of Scientology in 1979.[26] At the time she became a Scientologist, Alley admitted to having had a cocaine addiction and went through Narconon, a Scientology-affiliated drug treatment program,[27] to end her dependency.[28] She has continued her Scientology training and, as of 2007, has attained the level of OT VII (Operating Thetan Level 7).[29]

In May 2000, she purchased a 5,200 sq ft (480 m2) waterfront mansion from former Scientologist Lisa Marie Presley for $1.5 million. The house is in Clearwater, Florida, the spiritual headquarters of the Church of Scientology. Alley donated $5 million to the Church in 2007.[30]

In August 2015 Alley tweeted that she would not be supporting Hillary Clinton, the Democratic nominee during the 2016 presidential elections, and on April 8, 2016, she tweeted her support for Donald Trump and Rudy Giuliani.[31][32] On October 8, 2016, Alley retracted her endorsement of Trump, tweeting, "I hate this election and I'm officially no longer endorsing either candidate."[33]

November 10, 1995 Alley received her star on the Hollywood Walk of Fame for her contribution to Motion Picture.[35]

Alley's work has been honored by multiple associations throughout her career. For her role in the sitcom Cheers, she earned four Golden Globe Award nominations winning one for Best Actress - Television Series Musical or Comedy in 1991, and five Primetime Emmy Award nominations winning one for Outstanding Lead Actress in a Comedy Series in 1991.[38]