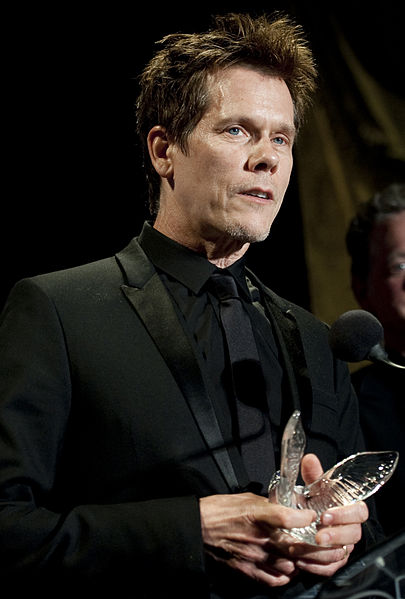 Kevin Norwood Bacon[1] (born July 8, 1958)[2] is an American actor and musician. His films include musical-drama film Footloose (1984), the controversial historical conspiracy legal thriller JFK (1991), the legal drama A Few Good Men (1992), the historical docudrama Apollo 13 (1995), and the mystery drama Mystic River (2003). Bacon is also known for taking on darker roles such as that of a sadistic guard in Sleepers (1996) and troubled former child abuser in a critically acclaimed performance in The Woodsman (2004). He is equally prolific on television, having starred in the Fox drama series The Following (2013-2015). For the HBO original film Taking Chance (2009), Bacon won a Golden Globe Award and a Screen Actors Guild Award, also receiving a Primetime Emmy Award nomination. The Guardian named him one of the best actors never to have received an Academy Award nomination.[3] In 2003, Bacon received a star on the Hollywood Walk of Fame for his contributions to the motion pictures industry.[4]

Bacon has become an icon for the concept of interconnectedness (as in social networks), having been popularized by the game "Six Degrees of Kevin Bacon". In 2007, he created SixDegrees.org, a charitable foundation.[5]

Bacon, the youngest of six children, was born and raised in a close-knit family in Philadelphia.[2] His mother, Ruth Hilda (née Holmes; 1916-1991), taught at an elementary school and was a liberal activist,[2] while his father, Edmund Norwood Bacon (May 2, 1910 - October 14, 2005), was a well-respected architect and a prominent Philadelphian who was Executive Director of the Philadelphia City Planning Commission for many years.[6]

At age 16, in 1975, Bacon won a full scholarship to and attended the Pennsylvania Governor's School for the Arts at Bucknell University,[7] a state-funded five-week arts program at which he studied theater under Dr. Glory Van Scott. The experience solidified Bacon's passion for the arts.[5][6]

Bacon left home at age 17 to pursue a theater career in New York City, where he appeared in a production at the Circle in the Square Theater School. "I wanted life, man, the real thing", he later recalled to Nancy Mills of Cosmopolitan. "The message I got was 'The arts are it. Business is the devil's work. Art and creative expression are next to godliness.' Combine that with an immense ego and you wind up with an actor."[8] Bacon's debut in the fraternity comedy National Lampoon's Animal House (1978) did not lead to the fame he had sought, and Bacon returned to waiting tables and auditioning for small roles in theater.[6] He briefly worked on the television soap operas Search for Tomorrow (1979) and Guiding Light (1980-81) in New York.

In 1980, he had a prominent role in the slasher film Friday the 13th.[9] Some of his early stage work included Getting Out, performed at New York's Phoenix Theater, and Flux, at Second Stage Theatre during their 1981-1982 season.[10]

In 1982, he won an Obie Award for his role in Forty Deuce,[11] and soon afterward he made his Broadway debut in Slab Boys, with then-unknowns Sean Penn and Val Kilmer. However, it was not until he portrayed Timothy Fenwick that same year in Barry Levinson's film Diner – costarring Steve Guttenberg, Daniel Stern, Mickey Rourke, Tim Daly, and Ellen Barkin – that he made an indelible impression on film critics and moviegoers alike.[12]

Bolstered by the attention garnered by his performance in Diner, Bacon starred in the box-office smash Footloose (1984).[10] Richard Corliss of TIME likened Footloose to the James Dean classic Rebel Without a Cause and the old Mickey Rooney/Judy Garland musicals, commenting that the film includes "motifs on book burning, mid-life crisis, AWOL parents, fatal car crashes, drug enforcement, and Bible Belt vigilantism."[13] To prepare for the role, Bacon enrolled at a high school as a transfer student named "Ren McCormick" and studied teenagers before leaving in the middle of the day.[6][14] Bacon earned strong reviews for Footloose,[15] and he appeared on the cover of People magazine soon after its release.

Bacon's critical and box office success led to a period of typecasting in roles similar to the two he portrayed in Diner and Footloose, and he had difficulty shaking this on-screen image. For the next several years he chose films that cast him against either type and experienced, by his own estimation, a career slump.

In 1988, he starred in John Hughes' comedy She's Having a Baby,[10] and the following year he was in another comedy called The Big Picture.[16]

In 1990, Bacon had two successful roles. He played a character who saved his town from under-the-earth "graboid" monsters in the comedy/horror film Tremors,[17] and he portrayed an earnest medical student experimenting with death in Joel Schumacher's Flatliners.[10]

In Bacon's next project he starred opposite Elizabeth Perkins in He Said, She Said. Despite lukewarm reviews and low audience turnout, He Said, She Said was illuminating for Bacon. Required to play a character with sexist attitudes, he admitted that the role was not that large a stretch for him.[10]

By 1991, Bacon began to give up the idea of playing leading men in big-budget films and to remake himself as a character actor. "The only way I was going to be able to work on 'A' projects with really 'A' directors was if I wasn't the guy who was starring", he confided to The New York Times writer Trip Gabriel. "You can't afford to set up a $40 million movie if you don't have your star."[18] He performed that year as gay prostitute Willie O'Keefe in Oliver Stone's JFK[19] and went on to play a prosecuting attorney in the military courtroom drama A Few Good Men.[20] Later that year he returned to the theater to play in Spike Heels, directed by Michael Greif.[10]

In 1994, Bacon earned a Golden Globe nomination for his role in The River Wild,[10] opposite Meryl Streep. He described the film to Chase in Cosmopolitan as a "grueling shoot", in which "every one of us fell out of the boat at one point or another and had to be saved".

His next film, Murder in the First, earned him the Broadcast Film Critic's Association Award in 1995,[10] the same year that he starred in the blockbuster hit Apollo 13.[21] Bacon played a trademark dark role once again in Sleepers (1996).[22] This part starkly contrasted with his appearance in the lighthearted romantic comedy, Picture Perfect (1997).[10]

Bacon made his debut as a director with the television film Losing Chase (1996), which was nominated for three Golden Globe Awards, and won one.[23] Bacon again resurrected his oddball mystique that year as a mentally-challenged houseguest in Digging to China[10] and as a disc jockey corrupted by payola in Telling Lies in America.[10] As the executive producer of Wild Things (1998), Bacon reserved a supporting role for himself and went on to star in Stir of Echoes (1999), directed by David Koepp.[24]

Bacon speaking before a premiere of Taking Chance in February 2009

In 2000, he appeared in Paul Verhoeven's Hollow Man.[25] Bacon, Colin Firth and Rachel Blanchard depict a ménage à trois in their film, Where the Truth Lies.[26] Bacon and director Atom Egoyan have condemned the MPAA ratings board decision to rate the film "NC-17" rather than the preferable "R". Bacon commented: "I don't get it, when I see films (that) are extremely violent, extremely objectionable sometimes in terms of the roles that women play, slide by with an R, no problem, because the people happen to have more of their clothes on."[27]

In 2003 he acted with Sean Penn and Tim Robbins in Clint Eastwood's movie Mystic River.

Bacon was again acclaimed for a dark starring role playing an offending pedophile on parole in The Woodsman (2004), for which he was nominated for best actor and received the Independent Spirit Award.[28] He appeared in the HBO Films production of Taking Chance, based on an eponymous story written by Lieutenant Colonel Michael Strobl, an American Desert Storm war veteran.[29] The film premiered on HBO on February 21, 2009. Bacon won a Golden Globe Award and a Screen Actors Guild Award for Outstanding Performance by a Male Actor in a Miniseries or Television Movie for his role.

On July 15, 2010, it was confirmed that Bacon would appear in Matthew Vaughn's X-Men: First Class.[30] His character was mutant villain Sebastian Shaw.[31]

In March 2012, Bacon was featured in a performance of Dustin Lance Black's play, 8 - a staged reenactment of the federal trial that overturned California's Prop 8 ban on same-sex marriage - as Attorney Charles J. Cooper.[32] The production was held at the Wilshire Ebell Theatre and broadcast on YouTube to raise money for the American Foundation for Equal Rights.[33][34]

In 2015, he said in a Huffington Post interview[37] and several magazines reported he would like to return to the Tremors franchise.[citation needed] However, Bacon doesn't appear in Tremors 5: Bloodline (2015).

Beginning in 2012, Bacon has appeared in a major advertising campaign for the EE mobile network in the United Kingdom, based on the Six Degrees concept and his various film roles.[38][39] In 2015, he became a commercial spokesperson for the U.S. egg industry.[40]

Bacon has been married to actress Kyra Sedgwick since September 4, 1988; they met on the set of the PBS version of Lanford Wilson's play Lemon Sky. He has said: "The time I was hitting what I considered to be bottom was also the time I met my wife, our kids were born, good things were happening. And I was able to keep supporting myself; that always gave me strength."[8] Bacon and Sedgwick have starred together in Pyrates, Murder in the First, The Woodsman, and Loverboy. They have two children, Travis Sedgwick (b. 1989) and Sosie Ruth (b. 1992). The family resides on the Upper West Side of Manhattan.[41] Bacon was previously in a five-year relationship with actress Tracy Pollan, in the 1980s.[42]

Bacon and Sedgwick appeared in will.i.am's video "It's a New Day", which was released following Barack Obama's 2008 presidential win. The pair lost part of their savings in the Ponzi scheme of infamous swindler Bernard Madoff.[47][48]

Bacon and Sedgwick learned in 2011, via their appearance on the PBS TV show Finding Your Roots with Henry Louis Gates, that they are ninth cousins, once removed.[49] They also appeared in a video[50] promoting the "Bill of Reproductive Rights", supporting among other things a woman's right to choose and have access to birth control.[51]

Bacon is the subject of the trivia game titled Six Degrees of Kevin Bacon, based on the idea that, due to his prolific screen career covering a diverse range of genres, any Hollywood actor can be linked to another in a handful of steps based on their association with Bacon. The name of the game derives from the idea of six degrees of separation. Although he was initially dismayed by the game, the meme stuck, and Bacon eventually embraced it, forming the charitable initiative SixDegrees.org, a social networking site intended to link people and charities to each other.[52]

The measure of proximity to Bacon has been mathematically formalized as the Bacon number and can be referenced at websites including Oracle of Bacon, which is in turn based upon Internet Movie Database data. In 2012 Google added a feature to their search engine, whereby searching for an actor's name followed by the words "Bacon Number" will show the ways in which that actor is connected to Kevin Bacon.[53] This feature is no longer active.

Kevin formed a band called The Bacon Brothers with his brother, Michael. The duo have released six albums.[55]