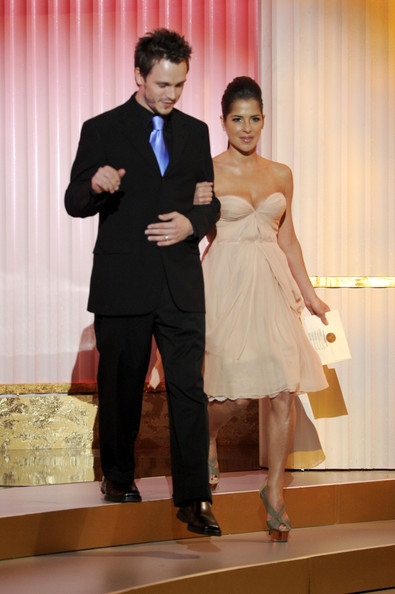 Kelly Marie Monaco (born May 23, 1976[1]) is an American model, actress, and reality television personality, best known for her portrayal of Sam McCall on the ABC soap opera General Hospital and as the first season winner of the reality TV competition series Dancing with the Stars. Monaco was also Playboy "Playmate of the Month" for April 1997, and portrayed Livvie Locke on the soap opera Port Charles from 1997 through 2003.

Kelly Monaco was born in Philadelphia, Pennsylvania[2] to Albert "Al" and Carmina Monaco. She is the middle child[3] and has four sisters: Christine, Marissa, Carmina and Amber.[4] The family moved to the Poconos before Monaco attended Pocono Mountain High School, where she first started with acting classes.[5] After high school she worked as a lifeguard at a local resort[5] and attended Northampton Community College for two years.[3]
Read more...

In 1996, Monaco, who had been thinking of a career in modeling, sent her photo to Playboy.[6] As a result, she became the Playmate of the Month for April 1997.[3][7] Throughout her tenure with Playboy in the 1990s,[3] Monaco was also featured in many Playboy Special Edition publications.[8]

Monaco's first television role was in the drama Baywatch[7] from 1997 to 1998.[3] In addition to playing the role of Susan on the show, Monaco was also Carmen Electra's body double at times,[3] as Electra could not swim.[9] Monaco also had minor roles in the late 1990s films BASEketball, Idle Hands, and Mumford.

Monaco had two roles in the ABC soap opera Port Charles: Olivia "Livvie" Locke Morley (1999-2003) and Tess Ramsey (2002-03). When that program ended, she joined the cast of the ABC soap opera General Hospital as Samantha McCall[10] in September 2003.

In March 2009, Monaco was chosen by Donald Trump and Paula Shugart to be one of the judges for the 2009 Miss USA pageant.[7]

Monaco was a cast member, and the season winner along with her professional partner, Alec Mazo, on the ABC reality television series Dancing with the Stars, during its first season in 2005. Although she initially faced tough criticism from the judges, she maintained a positive outlook throughout the series.[12] Among the events she experienced before her victory was a wardrobe malfunction in which the skimpy strap on her dress came apart during a Latin dance number.[13][14]

In February 2009, Monaco expanded her dancing résumé with Peepshow, a burlesque act directed by Tony Award-winning director Jerry Mitchell, that plays at the Planet Hollywood Resort and Casino in Las Vegas. Monaco starred as Bo Peep, a precocious character who discovers her sexuality throughout the show.[17] Monaco starred alongside singer and fellow Dancing with the Stars contestant Melanie Brown,[18] until June 2009, when Monaco's contract expired and she was replaced by Holly Madison.[19] The same year, Monaco was named Maxim's number one sexiest cover model of the decade.[20]

On July 27, 2012 it was announced that Monaco would be participating in the 15th season of Dancing with the Stars for a chance to win a second mirrorball trophy.[21] This time she was partnered with Valentin Chmerkovskiy. After making the finals for a second time, Monaco finished in third place on November 27, 2012.

In November 2017, Monaco returned to 25th season in Week eight,[22] to participate in a trio rumba with Terrell Owens and his professional partner Cheryl Burke.[23]

In July 2009 Monaco and several other daytime celebrities traveled to Kenya, Africa, as a part of the Feed the Children program, delivering food and other supplies and visiting schools and orphanages built by Feed the Children.[7][24]

On October 24, 2009, as part of the iParticipate campaign, Monaco and several of her General Hospital co-stars volunteered to help beautify a school in Los Angeles.[25]

When Monaco was a junior in high school, she met Mike Gonzalez, and began a relationship with him.[6] They worked together as lifeguards at a local resort and attended community college together.[26] They remained together for 18 years.[6][27] They broke up in 2009,[27] but as seen in the premiere episode of the reality television series Dirty Soap in 2011, she was still mourning the loss of this relationship. Monaco's General Hospital costar Kirsten Storms counseled her through her feelings on that episode by convincing her to burn her prom dress.[28]

On April 25, 2009, Monaco's apartment at the Planet Hollywood Resort and Casino was ransacked by burglars.[29]