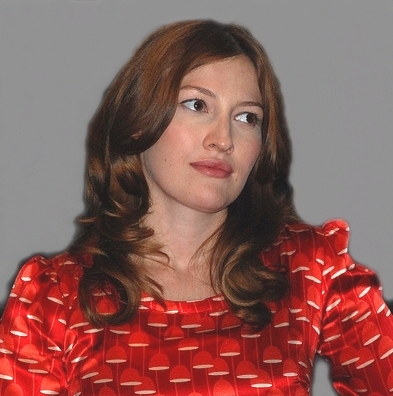 Kelly Macdonald (born 23 February 1976) is a Scottish actress who is best known for her roles in the films Trainspotting (1996), Gosford Park (2001), Intermission (2003), Nanny McPhee (2005), Harry Potter and the Deathly Hallows - Part 2 (2011), and Brave (2012). For the 2005 TV film The Girl in the Cafe, she was nominated for a Golden Globe and won the Emmy Award for Outstanding Supporting Actress in a Miniseries or Movie. In 2003, she appeared in the acclaimed BBC miniseries State of Play as journalist Della Smith.

For her role in the 2007 film No Country for Old Men, she was nominated for the BAFTA Award for Best Actress in a Supporting Role. She went on to star for five seasons in the HBO series Boardwalk Empire (2010-2014) as Margaret Thompson, for which she received a 2011 Emmy Award nomination.

Macdonald was born in Glasgow, Scotland and moved to Aberdeen when she was five years old. Her mother was a garment industry sales executive.[citation needed] Macdonald attended Eastwood High School 1987-1993.[1]
Read more...

Macdonald's career began while she was working as a barmaid in Glasgow.[2] She saw a leaflet advertising an open casting session for Trainspotting and decided to audition, winning the part of Diane,[3] the underage seductress to Ewan McGregor's Renton. Other roles include Mary O'Neary in Two Family House,[4] and an actress playing Peter Pan in Finding Neverland.[5] She had major roles in Robert Altman's British period piece Gosford Park,[6] where she played an aristocrat's maid, and in Intermission (2003), as Deirdre.[7]

On radio, she portrayed Mary in the 1999 BBC radio drama Lifehouse, based on Pete Townshend's abandoned rock opera, some of the songs for which were released on The Who's album Who's Next.[8] On television, her highest profile roles have been in two BBC dramas, the Paul Abbott serial State of Play (2003),[9] and the one-off Richard Curtis piece The Girl in the Café (2005).[10] Both of these were directed by David Yates, and both also starred Bill Nighy. For her performance in The Girl in the Café, she was nominated for the Golden Globe Award for Best Actress - Miniseries or Television Film in 2006,[11] and won the Primetime Emmy Award for Outstanding Supporting Actress in a Miniseries or a Movie.[12]

Macdonald starred in the 2005 film Nanny McPhee,[13] as the scullery maid Evangeline, and has since had supporting roles in A Cock and Bull Story (2006),[14] and the Coen brothers' Academy Award-winning No Country for Old Men (2007),[15] for which she was nominated for a BAFTA Award for Best Actress in a Supporting Role.[16] It was reported that she had to fight her agent to be considered for the role, but in 2017 Macdonald denied the story.[17]

Other films where she had supporting roles include Choke (2008), as Paige Marshall, the film adapted by Clark Gregg from the 2001 Chuck Palahniuk novel; In the Electric Mist (2009) (based on James Lee Burke's In the Electric Mist with Confederate Dead (1993), as Kelly Drummond, alongside Tommy Lee Jones and John Goodman; and Skellig (2009), as Louise.[18] She played the lead in The Merry Gentleman (2008), as Kate Frazier.[19]

In 2010, she played her first comedy role, in the British independent romantic comedy film The Decoy Bride.[20] The Decoy Bride was released in 2012. In 2011, she played the "Grey Lady" (revealed to be Helena Ravenclaw) in Harry Potter and the Deathly Hallows - Part 2, the final instalment of the Harry Potter film franchise. She replaced Nina Young, the original actress in the role. In 2012, she provided the voice of Merida, the heroine of the Disney/Pixar film Brave, and starred as Dolly in Anna Karenina.

From 2010 until its ending in 2014, she starred in the HBO crime drama Boardwalk Empire as Margaret Thompson, the wife of Prohibition-era Atlantic City crime boss Nucky Thompson (Steve Buscemi). She appeared in all five seasons of the series. In 2011, she and the rest of the show's cast were awarded the Screen Actors Guild Award for Outstanding Performance by an Ensemble in a Drama Series. In 2016, she starred in Ricky Gervais' Special Correspondents as Claire Maddox,[21] and Swallows and Amazons as Mrs. Walker.[22] In 2016, she played the lead role in "Hated in the Nation", an episode of the anthology series Black Mirror for which she received critical acclaim.[23] On 3 November 2016 Macdonald was featured in the trailer for Danny Boyle's T2 Trainspotting confirming she would reprise her role as Diane from the original film. In 2017, she co-starred opposite Benedict Cumberbatch in the BBC film The Child in Time.

In August 2003, Macdonald married musician Dougie Payne, bassist of rock band Travis. They have two children and moved back to their home town of Glasgow in 2014, after living in London and New York City.[24][25] They separated in 2017.[26]

Eastwood High School, where she was a pupil, has a Drama Studio And Theatre named in her honour.[1]