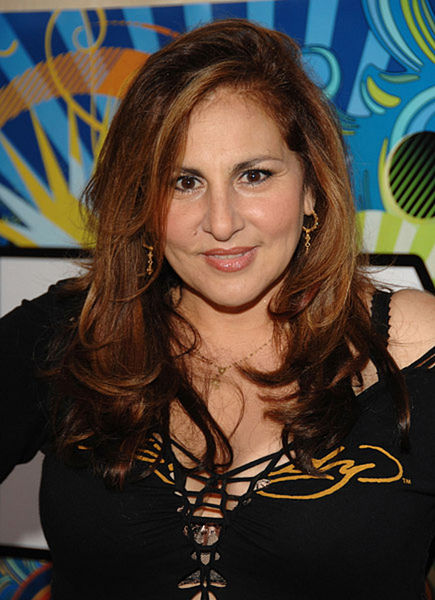 Kathy Ann Najimy (/nəˈdʒɪmi/ nə-JIM-ee; born February 6, 1957)[1] is an American actress. She is best known for voicing Peggy Hill on the animated television series King of the Hill (1997-2010), and for her roles in the films Sister Act (1992) and Hocus Pocus (1993), as well as her portrayal of Olive Massery on the NBC sitcom Veronica's Closet (1997-2000). Prior to achieving wider recognition, she was known for her professional partnership with Mo Gaffney, working as the duo "Kathy and Mo".

Najimy's film career began in the early 1990s, with a number of off-beat minor roles, but her first major role was in the 1992 comedy Sister Act, in the role of Sister Mary Patrick. She reprised this role in 1993 in Sister Act 2. She also starred in Hocus Pocus with Bette Midler and Sarah Jessica Parker as the Sanderson sisters. She appeared with Ellen Degeneres in three episodes of her sitcom Ellen, playing a different character each time (including a non-speaking cameo in the iconic "Puppy Episode") and in the TV movie If These Walls Could Talk 2. In 1997, she lent her voice to Warner Bros. Family Entertainment as Tilly the Hippo in the film Cats Don't Dance, alongside actors Scott Bakula, Jasmine Guy, John Rhys-Davies and Don Knotts, and has also played a role on the Nightmare Ned video game. In 1998, she made a cameo in Bride of Chucky as the maid who discovers Diane's and Russ's bodies. In 1999, she played the Stepmother in CinderElmo, a primetime special for Sesame Street. In 2001, she co-starred in the hit comedy film Rat Race alongside John Cleese, Rowan Atkinson, Cuba Gooding, Jr., Whoopi Goldberg, Jon Lovitz and Seth Green. She guest starred in That's So Raven. She has made four movies with Goldberg (Soapdish, Sister Act 1 and 2, and Rat Race).

From film, Najimy expanded into television roles, including a dramatic recurring role on Chicago Hope. Najimy was part of the cast of Veronica's Closet from 1997 to 2000. She co-created and starred in the hit Off-Broadway show and HBO specials "Kathy & Mo", with friend and actress Mo Gaffney. She appeared as Mae West in the Broadway hit Dirty Blonde. She also portrayed Dr. Mildred Finch on Numbers. Najimy also provided the voice of the drama teacher, Miss Thespius, in the 1998 Disney show Hercules: The Animated Series.

In 2003, Najimy provided the voice of Margalo in Stuart Little: The Animated Series, taking over from Melanie Griffith. She is the co-creator and director of the musical revue Back to Bacharach and David, which ran in New York City in 1992 and 1993, and which she directed again in Los Angeles in April 2009. She also appeared in Drop Dead Diva. In October 2009, Najimy played a police officer investigating an attack on Wisteria Lane on an episode of Desperate Housewives.[6] In March 2010, she appeared in the Ugly Betty episode "Million Dollar Smile", portraying Betty's new orthodontist, Dr. Frankel. In July 2011, Najimy appeared in TNT's Franklin and Bash episode "Bangover", playing a judge. Premiering in August 2015, Najimy appeared in Disney's Descendants as the Evil Queen. In the movie, she makes references to her previous role as Mary Sanderson in Hocus Pocus.[7]

Najimy, an outspoken feminist, is also noted as an activist for human rights and gay rights. She uses her celebrity status to donate money to charities by appearing on game shows. She appeared as a contestant on a celebrity version of The Weakest Link where she won $50,000 (beating Anthony Anderson) for The Feminist Majority Foundation's Campaign to Stop Gender Apartheid in Afghanistan. She has appeared three times on Celebrity Poker Showdown and won the season six tournament, donating the $100,000 to V-Day, an organization that helps stop violence against women and girls. She was also crowned Grand Champion on CBS's Gameshow Marathon in 2006, donating the $100,000 winnings to Girls Best Friend, a charity that helps empower girls.[citation needed] She's also worked with PETA on a number of animal welfare issues and posed with Todd Oldham for the "I'd Rather Go Naked Than Wear Fur" campaign.[8] In 2013, she was a contestant on Rachael vs. Guy: Celebrity Cook-Off on Team Rachael where she was playing for PETA, cooking only vegetarian food. She was eliminated on the Feb. 3 episode, reaching third place.[9] PETA awarded her their Compassionate Action Award in 2014.[10]

In 1981, she was a contestant on Family Feud, which was used as the finale in Gameshow Marathon. Najimy and her family were winners on both shows. In the 1981 Feud episode they won by 230 points, and in the Marathon version they scored 202 points to give Najimy the win. Najimy also appeared on the $25,000 Pyramid as a civilian contestant, on the episode dated July 31, 1985. Her celebrity partners were Constance McCashin and LeVar Burton. She failed to reach the bonus round, although she did win a Commodore 64 computer. She claimed, on the Pyramid show, that she also had been on American Bandstand. She returned to the "Pyramid" (The $100,000 Pyramid) on the June 26, 2016, episode as a celebrity guest opposite Rosie O'Donnell.[11] She appeared once again in Season 2, Episode 7 on July 23, 2017 to play against Alexandra Wentworth, helping her contestant partner win the $150,000 grand prize.[12][13]

Najimy is also very vocal about issues regarding weight and body imaging among females. In August 2006 Najimy voiced her opinions over a remark made by Heidi Klum on the television series Project Runway after Klum said one model's outfit made her look plus sized.[14]