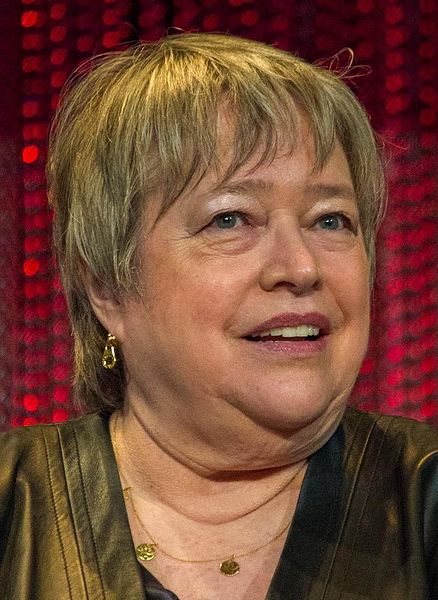 Kathleen Doyle Bates (born June 28, 1948)[1] is an American actress and director. Bates began her career on the stage, and was nominated for the Tony Award for Best Lead Actress in a Play in 1983 for her performance in 'night, Mother. For her portrayal of Annie Wilkes in the 1990 film Misery, she won the Academy Award for Best Actress. She followed this with roles in Fried Green Tomatoes (1991), Dolores Claiborne (1995), and Titanic (1997). She received her second and third Academy Award nominations for Primary Colors (1998) and About Schmidt (2002), in the category of Best Supporting Actress. She is also the recipient of two Golden Globes, two Screen Actors Guild Awards, three American Comedy Awards, and two BAFTA nominations.

Bates' television work has resulted in 14 Emmy Award nominations, including two for her role as Harriet "Harry" Korn on the NBC series Harry's Law (2011-12), and a win for her portrayal of Delphine LaLaurie on the third season of American Horror Story (2013-14). In 2012, she received the Emmy for Outstanding Guest Actress in a Comedy Series for her appearance on the ninth season of Two and a Half Men. She also received Emmy, Golden Globe and SAG Award nominations for her portrayal of Miss Hannigan in the 1999 television adaptation of Annie. Her directing credits include several episodes of the HBO series Six Feet Under (2001-03).

Bates was born in Memphis, Tennessee, the youngest of three daughters of mechanical engineer Langdon Doyle Bates and homemaker Bertye Kathleen (née Talbert; 1907-1997) [1] Her paternal grandfather was lawyer and author Finis L. Bates. Her great-great-grandfather was an Irish emigrant to New Orleans, Louisiana, who served as President Andrew Jackson's doctor.[2] She graduated early from White Station High School (1965) and from Southern Methodist University (1969), where she majored in Theatre and became a member of the Alpha Delta Pi sorority.[3] She moved to New York City in 1970 to pursue an acting career.[4]
Read more...

Bates' history of Broadway appearances includes Lanford Wilson's Fifth of July and the Robert Altman-directed Come Back to the Five and Dime, Jimmy Dean, Jimmy Dean with Karen Black and Cher. Bates originated the role of Lenny in the first production of Crimes of the Heart at the Actors Theatre of Louisville in 1979.[5] She was nominated for a Tony Award in 1983 for her stage role in the Pulitzer Prize-winning play 'night, Mother with Anne Pitoniak. The stage production ran for more than a year. One of her other successful New York stage productions was, Off Broadway, in Terrence McNally's Frankie and Johnny in the Clair de Lune which ran 533 performances and for which she won an Obie Award for Best Actress in 1988. McNally specifically wrote the play for Bates and F. Murray Abraham, who had to drop out and was replaced by Kenneth Welsh. The play was later filmed as Frankie and Johnny, starring Al Pacino and Michelle Pfeiffer. She succeeded Amy Irving in the Off-Broadway production of The Road to Mecca in 1988.

Bates' first feature film role was in the 1971 Miloš Forman comedy Taking Off (credited as "Bobo Bates"), in which she sings an original song "Even Horses Had Wings". Bates' next feature was the Dustin Hoffman film Straight Time (1978). In 1977, Bates made her Soap opera debut as Phyllis on NBC's soap opera The Doctors. From 1983 to 1984, she played prison inmate Belle Bodelle on All My Children and from 1984 to 1985, she played Evelyn Maddox on One Life to Live. In 1990 she would appear again with Hoffman in Warren Beatty's Dick Tracy as a stenographer. She appeared in films like The Morning After and Summer Heat, while guest-starring on television's L.A. Law. She then landed the role of obsessed fan Annie Wilkes, who holds her favorite author (played by James Caan) captive, in the 1990 thriller film Misery, based on the Stephen King novel. Bates received her first Academy Award nomination for that role, winning Best Actress.

Soon after, she starred with Jessica Tandy in the acclaimed 1991 movie Fried Green Tomatoes, based on the novel by comedic actress Fannie Flagg. In 1995 Bates played the title character in Dolores Claiborne, a film adaptation of another Stephen King novel, although she was not nominated for an Oscar. In 1997 Bates played Molly Brown in James Cameron's Titanic. Based on the 1912 sinking of the RMS Titanic, the film went on to earn more than $1.8 billion in box-office receipts worldwide.[6]

Bates also excelled in her role as the acid-tongued "dustbuster" political advisor Libby Holden in the 1998 drama film Primary Colors, which was adapted from the book in which political journalist Joe Klein novelized his experiences on the Presidential campaign trail in 1991-1992. For this performance, she received her second Academy Award nomination, for Best Supporting Actress. In 2002 she received her third nomination, for About Schmidt. More recently, she and Terry Bradshaw played the parents of Matthew McConaughey's character in the 2006 film Failure to Launch. Bates was featured in an uncredited cameo in the miniseries of Stephen King's The Stand.

She appeared in ten episodes of the HBO cable television series Six Feet Under for which she received an Emmy Award nomination for Outstanding Guest Actress in a Drama Series, as Bettina, in 2003. She was also nominated for Outstanding Guest Actress in a Comedy Series for 3rd Rock from the Sun in 1999, the same year that she was nominated for Outstanding Directing in a Miniseries or Movie for the Dashiell Hammett-Lillian Hellman biopic Dash & Lilly. She also had a recurring guest role on the American version of The Office as Jo Bennett.

Starting in the 1990s, Bates forged a formidable career as a director. She has directed episodes of Homicide: Life on the Street, NYPD Blue, Oz, Six Feet Under and Everwood. Bates directed the television movies Dash and Lilly and the self-starring Ambulance Girl. She directed and co-starred in Have Mercy (2006) with Melanie Griffith. In 2008, she re-teamed with Leonardo DiCaprio and Kate Winslet in Revolutionary Road. She starred in David E. Kelley's legal drama Harry's Law, which began airing on NBC on January 17, 2011, but was cancelled on May 14, 2012.[8]

In 2012 Bates made a guest appearance on Two and a Half Men as the ghost of Charlie Harper on the episode "Why We Gave Up Women", which aired on April 30, 2012. In the episode Charlie has returned as a ghost to haunt his brother, Alan (Jon Cryer). He tells Alan that after a life of womanizing and debauchery, he was sent to hell and condemned to spend eternity in a woman's body. This guest appearance resulted in Bates winning the Primetime Emmy Award for Outstanding Guest Actress in a Comedy Series. It was Bates' first Emmy win after nine nominations.

In 2013 she began starring in the American Horror Story series' third season, Coven, as Delphine LaLaurie, an immortal racist who is brought back into the modern world after spending years buried alive. For that role, she won an Emmy Award for Outstanding Supporting Actress in a Miniseries or a Movie. Bates returned in its fourth season Freak Show as Ethel Darling, a bearded lady who performs in the freak show the season is centred on.[9] She was confirmed for the fifth season of American Horror Story: Hotel where she played Iris, the hotel's manager who hates Sarah Paulson's character Hypodermic Sally.[10] It premiered on October 7, 2015, and concluded on January 13, 2016. On September 14, 2016, Bates returned for her fourth, and the show's sixth season, Roanoke, playing both Thomasin "The Butcher" White, and White's reenactress, Agnes Mary Winstead.[citation needed]

In June 2016, the Human Rights Campaign released a video in tribute to the victims of the 2016 Orlando gay nightclub shooting; in the video, Bates and others told the stories of the people killed there.[11][12]

Bates is the Executive Committee Chair of the Actors Branch of the Academy of Motion Picture Arts and Sciences Board of Governors.[13] In 2014, Bates became a national spokesperson for lymphedema and Chairperson for the Lymphatic Education & Research Network's Honorary Board.

On September 20, 2016, Bates received a motion pictures star on the Hollywood Walk of Fame for her work in the film industry. Her star is located at 6927 Hollywood Boulevard.[14][15]

In 2018, she starred as Amy's mother - and a shrew of a wife of Raymond Joseph Teller (both attended the wedding with Sheldon) - in the finale of the 11th season of The Big Bang Theory.

Bates has successfully battled ovarian cancer since her diagnosis in 2003. In September 2012, she revealed via Twitter that she had been diagnosed with breast cancer two months earlier and had undergone a double mastectomy.[17][18] In 2014, at the New York Walk for Lymphedema & Lymphatic Diseases, Bates announced via pre-recorded audio that, due to the double mastectomy, she has lymphedema in both arms. At that time, Bates became the National Spokesperson for the Lymphatic Education & Research Network (LE&RN) and has been actively involved in lymphedema and lymphatic disease advocacy. On May 11, 2018, Bates led advocates in a Capitol Hill Lobby Day to garner Congressional support for research funding. The next day, May 12, Bates addressed supporters at the first-ever DC/VA Walk to Fight Lymphedema & Lymphatic Diseases at the Lincoln Memorial.