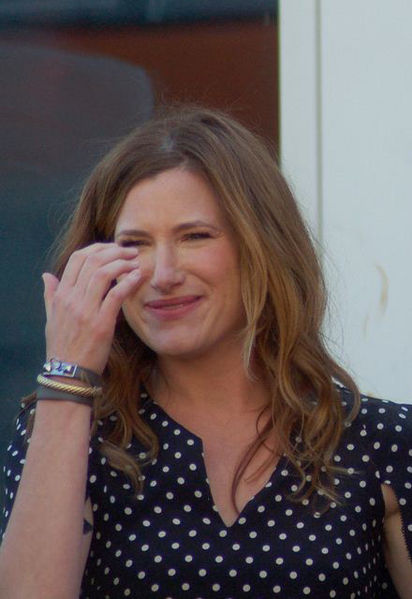 As a lead actress, Hahn starred in the 2013 comedy-drama film Afternoon Delight, directed by Jill Soloway. She had a starring role in the comedy film Bad Moms (2016), and its sequel, A Bad Moms Christmas (2017). She has also appeared in a number of dramatic films, including Revolutionary Road (2008), This Is Where I Leave You (2014), Tomorrowland (2015), The Visit (2015), and Captain Fantastic (2016). In 2017, she received a nomination for a Primetime Emmy Award for Outstanding Supporting Actress in a Comedy Series for her work in Transparent (2014-present).

Hahn was born in Westchester, Illinois, the daughter of Karen and Bill Hahn.[3] She has German, Irish, and English ancestry. She was raised Catholic.[4] Hahn grew up in Cleveland Heights, Ohio[5] and attended Beaumont School.[6] She attended Northwestern University, where she obtained a bachelor's degree in theatre before attending Yale University.[7] While attending Yale School of Drama, Hahn starred as Sally Bowles in Cabaret and as Célimène in Molière's play The Misanthrope.[citation needed]
Read more...

Hahn's first appearance on any television program was Hickory Hideout, a local puppet show for children for then-NBC owned-and-operated station WKYC in Cleveland. (By the time of its cancellation, Hickory Hideout was airing cross all of NBC's O&O stations.) While attending a theater festival, she met an NBC casting director,[who?] who, in turn, introduced her to creator/producer Tim Kring. Hahn impressed Kring so favorably that he created the character of Lily Lebowski in Crossing Jordan specifically for her.[8] The series aired from 2001 to 2007. Hahn has said of meeting Kring, "NBC and Tim Kring took a huge leap of faith in casting me. To be worked into a show that was in production and on the schedule, is an amazing stroke of luck." On October 21, 2008, TV Guide reported that Hahn had signed a talent holding deal with Fox.[9]

In 2003, Hahn appeared in a supporting role alongside Kate Hudson and Matthew McConaughey in the romantic comedy film, How to Lose a Guy in 10 Days. The following year, she appeared in Win a Date with Tad Hamilton!, Anchorman: The Legend of Ron Burgundy, Around the Bend, and Wake Up, Ron Burgundy: The Lost Movie. She later had more supporting roles in films, including the 2005 romantic comedy-drama A Lot like Love starring Ashton Kutcher and Amanda Peet, The Holiday (2006) with Cameron Diaz, the science fiction adventure drama The Last Mimzy (2007) alongside Rainn Wilson, Step Brothers (2008), Revolutionary Road (2008) starring Leonardo DiCaprio and Kate Winslet, The Goods: Live Hard, Sell Hard (2009), How Do You Know (2010), Our Idiot Brother (2011), and Wanderlust (2012).

On television, Hahn starred alongside Hank Azaria in the short-lived NBC comedy series, Free Agents, a 2011 remake of the British series of the same name.[10] She had recurring roles on HBO shows Hung and Girls. From 2012 to 2015, she received praise for her recurring role on the NBC comedy series, Parks and Recreation as Jennifer Barkley, campaign manager to Leslie Knope's (Amy Poehler) opponent Bobby Newport (Paul Rudd, whom she starred alongside in Our Idiot Brother, How Do You Know, and Wanderlust).[11] She received a Critics' Choice Television Award nomination for Best Guest Performer in a Comedy Series for her performance.[12]

Hahn at the premiere of This Is Where I Leave You.

In 2013, Hahn played her first leading role, in the comedy-drama film Afternoon Delight, which was written and directed by Jill Soloway. The film premiered at the 2013 Sundance Film Festival.[13] For her role, she was nominated for a Gotham Independent Film Award for Best Breakthrough.[14] Later that year, Hahn appeared opposite Jennifer Aniston (her co-star in Wanderlust) in the box-office hit We're the Millers, and co-starred alongside Ben Stiller and Kristen Wiig in The Secret Life of Walter Mitty. In 2014, she starred in the comedy film Bad Words alongside Jason Bateman, the ensemble comedy-drama This Is Where I Leave You, and Peter Bogdanovich's She's Funny That Way alongside Owen Wilson.

In 2014, Hahn was cast as Rabbi Raquel Fein in the Amazon Studios critically acclaimed dark comedy-drama, Transparent, whose creator, Jill Soloway, had directed her in Afternoon Delight, as noted above. She received a personal Emmy nomination for Outstanding Supporting Actress in a Comedy Series (2017) as well as a Screen Actors Guild Award nomination along with the cast. In 2015, she starred alongside Steve Coogan in the Showtime comedy-drama, Happyish,[15][16] but the show was canceled after a single season.[17] That same year, Hahn co-starred alongside George Clooney and Hugh Laurie in the science-fiction adventure film Tomorrowland,[18] and starred in the box-office horror hit The Visit.[19][20]

In 2016, Hahn appeared alongside Viggo Mortensen in the drama film Captain Fantastic,[21][22] and starred alongside Mila Kunis, Christina Applegate, Kristen Bell and Jada Pinkett Smith in the comedy film Bad Moms.[23] IndieWire's Kate Erbland gave the film a B-, noting that it "boasts some good jokes but Hahn's revelatory performance is the big draw."[24] She next appeared in the Amazon comedy pilot I Love Dick, based on the novel by the same name by Chris Kraus, which Afternoon Delight writer-director and Transparent creator Jill Soloway directed, and which premiered on August 19, 2016.[25][26][27]

In 2018, Hahn begun appearing in TV commercials for Chrysler. In the same year, she provided the voice of character Ericka Van Helsing in the animated comedy Hotel Transylvania 3: Summer Vacation.