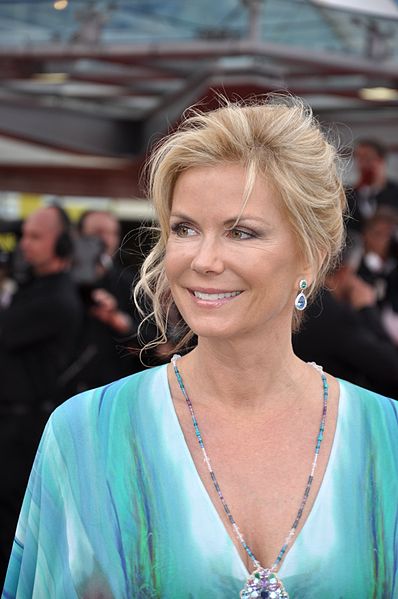 She was born in Hollywood, California and graduated from Beverly Hills High School. She is the daughter of Olympic ski jumper Keith R. Wegeman and actress Judith Lang and the granddaughter of Oscar-winning cinematographer Charles Lang.[2]

On November 11, 2012, it was announced that Lang had filed for divorce, citing irreconcilable differences after 15 years of marriage.[4] The divorce was finalized in June 2014.[citation needed]

Lang's first credit role was a movie called Skatetown, U.S.A. (1979), with Scott Baio, Maureen McCormick and Patrick Swayze. That was followed by guest roles in various television series such as the short-lived The Powers of Matthew Star and Masquerade and the long-running Riptide, Happy Days, The Fall Guy and HBO's 1st & Ten. Lang starred in the 1996 movie Subliminal Seduction. In 1985, Lang appeared in three music videos: Alabama's "There's No Way" (where she played the love interest of Alabama lead singer Randy Owen), and The Beach Boys' "Getcha Back" and its sequel "It's Gettin' Late".[citation needed]

In 1987, she was offered the role of blue-collar Brooke Logan on the soap opera The Bold and the Beautiful, and has been an integral part of the program ever since. Her love affair with Ridge Forrester (played by Ronn Moss) has been a key story arc for over 20 years, and a love triangle among Brooke, Ridge, and Taylor (Hunter Tylo) stretched across an entire decade. The show's 5,000th episode included only the four core characters: Brooke, Ridge, Stephanie and Eric.[5] As of February 2015, Lang is one of only two actors to be on The Bold and the Beautiful throughout the series. The other is John McCook, who portrays Eric Forrester.[6]

She appeared as Brooke on The Young and the Restless in 1999, interacting with Eric Braeden (Victor), Peter Bergman (Jack), and Eileen Davidson (Ashley). Lang previously appeared on The Young and the Restless as Gretchen in 1981, and returned to the soap, for a brief stint, in July 2007. Her work as Brooke has been recognized with seven Soap Opera Digest Award nominations, beginning in 1991 and most recently in 2005.

Crystal Chappell won a Daytime Emmy Award along with Lang, Hillary B. Smith and Galen Gering in the Outstanding Drama Series: New Approach category for producing Venice: The Series.[7]

In 2016, Lang made an appearance as herself in the Australian soap opera Neighbours.[8]