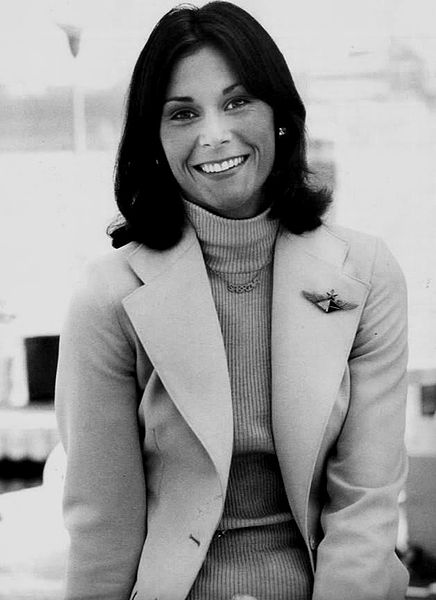 Lucy Kate Jackson (born October 29, 1948) is an American actress, director and producer, known for her television roles as Sabrina Duncan in the series Charlie's Angels (1976-79) and Amanda King in the series Scarecrow and Mrs. King (1983-87). Her film roles include Making Love (1982) and Loverboy (1989). She is a three-time Emmy Award nominee and four-time Golden Globe Award nominee.

Jackson began her career in the late 1960s in summer stock, before landing her first major television roles in Dark Shadows (1970-71) and The Rookies (1972-76). She also appeared in the film Night of Dark Shadows (1971). The huge success of her role as Sabrina Duncan on "Charlie's Angels" saw her appear on the front cover of Time magazine, alongside co-stars Farrah Fawcett and Jaclyn Smith, while her role as Mrs. King won her Germany's Bravo Golden Otto Award for Best Female TV Star three times (1986-88). She went on to star in the short-lived television adaptation of the film Baby Boom (1988-89). She then continued to star in numerous TV movies, including Quiet Killer (1992), Empty Cradle (1993) and Satan's School for Girls (2000), a remake of the 1973 TV movie of the same name in which she also starred.

Jackson was born in Birmingham, Alabama, the daughter of Ruth (née Shepherd) and Hogan Jackson, a business executive.[1] She attended The Brooke Hill School for Girls while residing in Mountain Brook and then went on to the University of Mississippi, where she was a member of the Delta Rho chapter of the Kappa Kappa Gamma sorority,[2] but during her sophomore year at the University of Mississippi, she moved to New York City to study acting at the American Academy of Dramatic Arts.[3]

Jackson worked as an NBC page at the network's Rockefeller Center studios and did summer stock at the Stowe Playhouse in Stowe, Vermont before landing a role as the mysterious, silent ghost Daphne Harridge on the 1960s supernatural daytime quasi-soap opera Dark Shadows. In 1971, Jackson had a starring role as Tracy Collins in Night of Dark Shadows, the second feature film based on the daytime serial. She was joined by her Dark Shadows castmates Lara Parker, David Selby, Grayson Hall, Nancy Barrett, John Karlen, and Thayer David. This movie was more loosely based on the series than the first feature film, and it did not fare as well at the box office.[4] The same year, she worked with James Stewart in two episodes of the short-lived sitcom, The Jimmy Stewart Show.[5]

She then appeared as nurse Jill Danko, wife of Mike Danko, played by Sam Melville, for four seasons on the 1970s crime drama The Rookies. A supporting cast member, Jackson filled her free time by studying directing and editing.[6] She also appeared in several TV films during this period. Jackson's performance was well received in the 1972 independent film Limbo, one of the first theatrical films to address the Vietnam War and the wives of soldiers who were POWs, MIA or killed in action (KIA).[7] She also appeared in an all-star ensemble cast in Death Scream, a 1975 television dramatization of the circumstances surrounding a real-life 1964 murder as reported in a sensational article in The New York Times. Jackson hosted the thirteenth episode of season four of Saturday Night Live which aired in February 1979. During her monologue, she referred to being an NBC page ten years earlier where she led tours of the studio.

In 1975, Jackson met with Rookies producers Aaron Spelling and Leonard Goldberg to discuss her contractual obligation to star in another television series for Spelling/Goldberg Productions upon that show's cancellation. Goldberg told her of a series that was available—because "every network has passed on it", The Alley Cats. Spelling said that when he told Jackson the title of the series had to be changed and asked her what she would like to call it, she replied, Charlie's Angels, pointing to a picture of three female angels on the wall behind Spelling.[8] Jackson was originally cast as Kelly Garrett (which ultimately went to her co-star Jaclyn Smith), but decided upon Sabrina Duncan instead. The huge success of the show saw Jackson, Smith and Farrah Fawcett-Majors (who played Jill Munroe) appear on the front cover of Time magazine. The show aired as a movie of the week on March 21, 1976, before debuting as a series on September 22, 1976. Because Kate was considered the "star" of Charlie's Angels due to her coming off of four years on The Rookies and her acting experience, her original role of Kelly Garrett was featured prominently in the pilot movie, which was originally to be played by Jackson.

At the beginning of the third season of Charlie's Angels, Jackson was offered the Meryl Streep role in the feature film Kramer vs Kramer (1979), but was forced to turn it down because Spelling told her that they were unable to rearrange the hit show's shooting schedule to give her time off to do the film.[9] At the end of the third season, Jackson left the show saying, "I served it well and it served me well, now it's time to go."[citation needed] Spelling cast Shelley Hack as her replacement.

Jackson starred alongside Harry Hamlin and her Rookies co-star, Michael Ontkean, in the feature film Making Love (1982), directed by Arthur Hiller. It was a movie some considered to be ahead of its time, and attempted to deal sensitively with the topic of homosexuality. However, it received tepid reviews and did poorly at the box office.[10]

In 1983, Jackson had a starring role in Scarecrow and Mrs. King, a one-hour action drama in which she played housewife Amanda King opposite Bruce Boxleitner's spy, code-named "Scarecrow". Jackson also co-produced the series with Warner Brothers Television through her production company, Shoot the Moon Enterprises. During this time she developed an interest in directing. Scarecrow and Mrs. King aired for four seasons from 1983-87.

During filming of the show's fourth season, in January 1987, Jackson had a mammogram for the first time, which found a small malignant tumor. Her series' producer — the only person she told about the diagnosis — rescheduled her work on the show. She checked in to a hospital under an alias to have a lumpectomy. Jackson returned to the series a week later, working with the aid of painkillers through five weeks of radiation treatments.[11]

After apparently overcoming the cancer, Jackson followed up the cancelled Scarecrow and Mrs. King by taking on the main role in Baby Boom, a 1988 TV sitcom version of the original movie starring Diane Keaton, but it lasted only one season.[12]

In 1989, she starred in the film Loverboy playing the mother of Patrick Dempsey's character. She said she took the job in order to work with the director, Joan Micklin Silver, having admired the work Silver had done on the film Hester Street.[citation needed]

In September 1989, another mammogram indicated residual breast cancer which the previous operation had missed. This time she had a partial mastectomy and reconstructive surgery. “The range of emotions you go through is amazing”, she says. “But I made a conscious decision to be positive.” Jaclyn Smith cancelled a trip to New York City, meeting Jackson at her doctor’s office before she checked in to the hospital. “I’d been crying before I got there,” said Smith. “Then I saw Kate, and she had a smile on her face. She said, 'We've gotten through other things, like divorces, and we'll get through this.' And we did.” When Jackson awoke after surgery, “The first thing I heard was good news. My lymph nodes were clean.” Back at home she read medical journals, switched to a macrobiotic diet and came to terms with her reconstructive surgery. “I'm never going to have the perfect body”, she says. “I'm not into facelifts and lip poufs. But I can wear a strapless evening gown, a bustier or whatever is required for a part.”[11]

Jackson starred in several TV movies during the next several years, while working for breast cancer awareness. In 1995, after a night filming on location, she checked herself into an Alabama hospital for tests due to a feeling of malaise and an inability to sleep. After several tests, Dr. Gerald Pohost, now head of cardiology at U.S.C., diagnosed that Jackson had been born with an atrial septal defect, a tiny hole in her heart which had previously gone undetected despite Jackson's active lifestyle. She underwent open heart surgery to correct the defect.[13]

Jackson spoke publicly about breast cancer and heart health and, in 2003, was awarded the "Power of Love" award by the American Heart Association for raising awareness of these issues.[14]

In 2004, the television film Behind the Camera: The Unauthorized Story of Charlie's Angels aired, with actress Lauren Stamile portraying Jackson.[15] In August 2006, Jackson, Farrah Fawcett and Jaclyn Smith, the three original Angels, made a surprise appearance together at the 58th Primetime Emmy Awards in a tribute to the recently deceased Angels creator, Aaron Spelling.

In 2007, Jackson played Elizabeth Prentiss, the mother of FBI Agent Emily Prentiss (played by Paget Brewster) on Criminal Minds. In August 2008, she was a guest judge on an episode of Jaclyn Smith's Bravo reality series Shear Genius, presiding over a hairdressing competition to update the original trio's signature hairdos.[16]

Jackson was engaged to actor Edward Albert in the mid-1970s, during which time they lived together. She was then linked romantically to producer Robert Evans, stuntman Gary Quist and actors Dirk Benedict, Nick Nolte and Warren Beatty. After a six-month courtship Jackson married actor, producer and fellow Southerner Andrew Stevens (the son of actress Stella Stevens) in August 1978. The couple divorced in 1981. After her divorce from Stevens, Jackson said, "I felt as if my ex-husband drove up to my bank account with a Brink's truck." Jackson was then linked with actor Gary Pendergast and screenwriter Tom Mankiewicz. She married New York businessman David Greenwald in 1982, and they formed Shoot The Moon Productions together, the company that produced Jackson's series Scarecrow and Mrs. King.[19] The couple divorced in 1984.

After the divorce, Jackson was frequently seen with dermatologist Arnold Klein. While recovering from her second bout with breast cancer and on vacation in Aspen, Colorado in 1989, Jackson met Tom Hart, the owner of a Utah ski lodge, and the pair married in 1991. The couple resided both in Los Angeles and Park City, Utah. Jackson became stepmother to Sean, Hart's son from a previous relationship. Jackson and Hart divorced in 1993. In 1995, Jackson adopted a son, Charles Taylor Jackson.[20]

In May 2010, Jackson sued her financial advisor, Richard B. Francis, claiming his actions cost her more than $3 million and brought her to financial ruin.[21] The parties reached an undisclosed settlement in December 2010.[22]