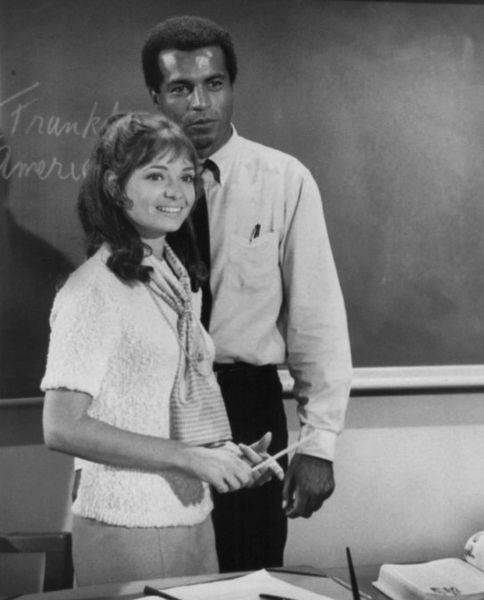 Karen Lynne Valentine (born May 25, 1947) is an American actress. She is best known for her role as the idealistic schoolteacher Alice Johnson in the ABC comedy drama series Room 222 from 1969 to 1974, for which she won the Primetime Emmy Award for Outstanding Supporting Actress in a Comedy Series in 1970, and received a Golden Globe Award nomination in 1971. She later went to star in her own short-lived sitcom Karen (1975), and played leading roles in films Hot Lead and Cold Feet (1978) and The North Avenue Irregulars (1979).

Valentine grew up in Sebastopol, California, and won a spot representing California at the Miss Teenage America pageant, where she was awarded the Talent Award. Valentine was Miss Sonoma County and Top 10 at Miss California, state finals to Miss America. When Ed Sullivan saw her act (where she would comically dance in a flamboyant costume while lip-synching to Eydie Gormé's "Blame it on the Bossa Nova"), he was quoted as saying, "I want that girl on my show."[citation needed]
Read more...

In 1966-1967, she started her television career as "The Resident Dream Girl" on The Dream Girl of 1967, replacing Beverly Adams from the first weekday broadcast opposite hosts Dick Stewart and Wink Martindale, and during that time she appeared on another Chuck Barris show, The Dating Game.

In 1969, Valentine won her breakthrough role as a new teacher on the ABC television series Room 222 with Lloyd Haynes and Michael Constantine.[1][2] She was discovered by Gene Reynolds, the director of Room 222, who saw her lip-synching in rehearsal and realized she was funny. She was nominated twice for an Emmy and once for a Golden Globe, winning an Emmy in 1970 for Outstanding Actress in a Supporting Role.[3]

Valentine later starred in her own television series, Karen, in 1975. She played Gidget in the 1969 film Gidget Grows Up, the title role in the critically acclaimed true story Muggable Mary, Street Cop (1982) and appeared in many other movies for television including The Daughters of Joshua Cabe (1972), Coffee, Tea or Me? (1973), The Girl Who Came Gift-Wrapped (1974), e'Lollipop[4] (1976), Murder at the World Series (1977), Go West, Young Girl (1978) and Skeezer (1982). Valentine was a semi-regular on The Hollywood Squares from 1971 to 1977 on both NBC-TV and in syndication, often trading quips with Paul Lynde. She guest-starred on many series, including Starsky & Hutch, Baretta, McMillan & Wife, Cybill and Murder, She Wrote and multiple episodes of The Love Boat and Love, American Style. She had a starring role in the 25th episode of the third season of the 1985 revival of The Twilight Zone, entitled "Many, Many Monkeys".

Report a problem
Write to Karen Valentine at FanPal • 2021