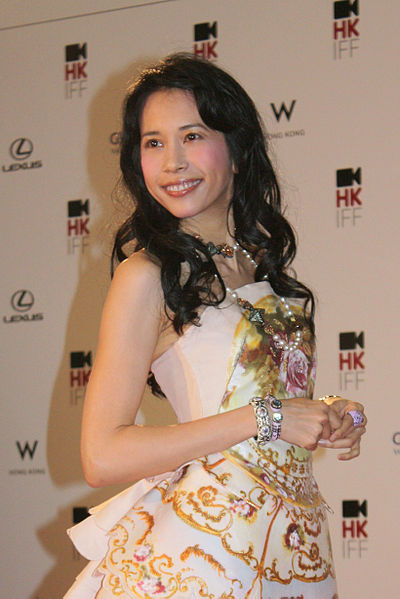 Karen Mok (Chinese: 莫文蔚) is one of the leading Chinese actresses and pop singers.[1] She has won the Golden Melody Award three times, has released over 20 solo CDs, acted in over 40 movies and has over 14 million followers on Chinese microblogging site Weibo.

She was was born on 2 June 1970 as Karen Joy Morris in Hong Kong and is the sister of the writer and producer Trevor Morris, and a granddaughter of Alfred Morris, the first principal of King's College, Hong Kong. She speaks English, Cantonese, Mandarin, Italian, German and French.[2]

She is of mixed ancestry: her father is half-Chinese and half-Welsh, while her mother is half-Chinese, quarter-Iranian, and quarter-German.[3][4] Mok attended Diocesan Girls' School from primary to secondary grade in Hong Kong. When she was a F.5 student, she received the 1st Hong Kong Outstanding Students Awards. In 1987 she won a scholarship for the United World College of the Adriatic near Trieste from which she graduated in 1989 with the International Baccalaureat.[5] She subsequently studied at Royal Holloway, University of London and majored in Italian literature.

In her initial Hollywood productions such as Around the World in 80 Days (2004) Mok used her birth name Karen Joy Morris, but went to using her stage name Karen Mok for all future productions such as Man of Tai Chi (2013) . She also supplied the voice of Princess Kida for the Cantonese dub of Walt Disney's Atlantis: The Lost Empire (2001). Mok played the female lead in the 10th anniversary Asian tour of the hit Broadway musical Rent in the lead role of Mimi in 2005 and 2006.

Mok carried the torch at the 2008 Summer Olympics held in Beijing[6] and performed at the opening and closing ceremonies.[7] In October 2008, she launched her own brand of perfume in Hong Kong.[8]

Mok married her first boyfriend, German-born Johannes Natterer, at a church near Florence, Italy, on 1 October 2011.[30] Mok has 3 step-children and spends her time between London and her international engagements.

Mok is a strong advocate for animals and animals rights and has been involved in numerous campaigns for this purpose. Amongst others, she has joined efforts to help bears in China whose bile is used for medicinal purposes[31][32] and has been on an expedition with Hong Kong Society for the Prevention of Cruelty to Animals (SPCA) to demonstrate against culling of baby seals.[33] She has also been involved with the People for the Ethical Treatment of Animals Asia-Pacific's (PETA).[34]

In 2007, Mok was involved with MTV EXIT, a campaign against human trafficking in Asia. She presented Traffic: An MTV EXIT Special, a documentary on trafficking.[35] Karen currently serves as ambassador for UNICEF, SPCA, Animals Asia Foundation,[36][37] Enlighten-Action for Epilepsy,[38] Care for Children,[39] and Roll Back Malaria (RBM).[40]

In 2016, she was awarded the title of the cultural ambassador of the Italian city of Bergamo, being the first Chinese artist to be awarded this title.[41][42]

In 2017, she announced the creation of the Morris Charity Initiative with the initial goal to raise money to provide scholarships for students at the United World College Changshu.[43]