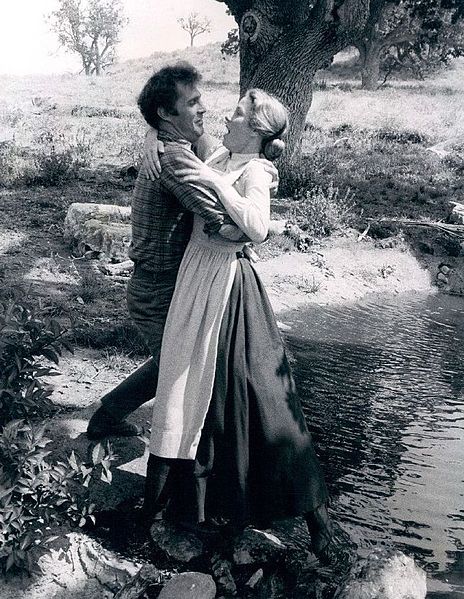 Karen Trust Grassle (born February 25, 1942) is an American actress, known for her role as Caroline Ingalls, the wife of Michael Landon's character and the mother of Melissa Sue Anderson’s and Melissa Gilbert's character, in the NBC television drama series Little House on the Prairie.[1]

Grassle studied ballet, acted in school plays, sang in the Baptist choir, and was Vice President of the student body her senior year, when she graduated from Ventura High School in 1959. She attended Sophie Newcomb College (Tulane University, 1959-60) and then transferred to the University of California, Berkeley.[1] She graduated with BA degrees in 1965, a BA in English, the other in Dramatic Art. She received a Fulbright Fellowship to the London Academy of Dramatic Art in London.[1] She apprenticed at the Actor's Workshop of San Francisco in 1961-62. Her parents, Gene F. Grassle and Frae Ella Berry had struggled through the depression, as well as Frae being a school teacher and Gene a small business man. They established the Grassle Realty in Ventura, California in the 50's.
Read more...

After summers at the Stanford Contemporary Workshop playing leads and two summers at the Colorado Shakespeare Festival playing classical roles, her first professional engagement was a season at the Front Street Theatre, Memphis, TN. upon return from London. While living in New York City, she worked at resident and stock theatres throughout the country, also appearing on PBS in original works and on networks in three soap operas. She made her Broadway debut in the short-lived 1968 play The Gingham Dog. Grassle played in Butterflies are Freeon Broadway (as stand-by with Gloria Swanson, Rosemary Murphy, etc.) as well as at the Elitch Theatre in Denver, Colorado, in June 1972, along with Maureen O'Sullivan and Brandon deWilde, who was killed before leaving town after the performances ended.[2]Grassle starred in the Shakespeare in the Park "Cymbeline." with Christopher Walken, Sam Waterston, and Bill DeVane.

Grassle auditioned for the role of the mother, Caroline Ingalls, in the Little House on the Prairie TV series and won the part. The series ran for nine seasons, from 1974 to 1983. After making the pilot for "Little House on the Prairie," Grassle appeared in one episode of Gunsmoke entitled "The Wiving" as Fran, one of several saloon girls kidnapped à la Seven Brides for Seven Brothers. Subsequently, she acted in the features Wyatt Earp, starring Kevin Costner, in 1994. and Harry's War, a 1981 American film. She played Kathy, the wife of Edward Herrmann's title character. On Television, she starred in and co-wrote the NBC-TV film "Battered." Other TV movies include "Cocaine, One Man's Seduction," Crisis in MidAir," and "Between the Darkness and the Dawn". In episodic TV, she starred in "Hotel," "Love Boat,""Murder She Wrote," (twice.)She also appeared on "Hollywood Squares" and numerous talk shows such as "Dinah," "Merv Griffin," "Mike Douglas," and "John Davidson." During this period, she lobbied for federal funding for shelters for battered women and appeared in many events to support the Equal Rights Amendment.

After the series ended, she moved to Santa Fe, New Mexico and became co-founder and Artistic Director of Santa Fe’s Resource Theater Company. Later she moved to Louisville, Kentucky, where she performed with the company of actors at Actors Theatre of Louisville. In 1999, she moved back to Los Angeles,eventually settling in the San Francisco Bay Area, where she currently lives.

Ms. Grassle continues to perform in productions in San Francisco, Berkeley, and Palo Alto as well as tours and productions such as Driving Miss Daisy in the starring role of Miss Daisy at the Manitoba Theatre Centre in Winnipeg, Manitoba, Canada in a co-production with Rubicon Theatre and at the Riverside Center for the Performing Arts in Fredericksburg, Virginia. In 2008, she was awarded a prize for her performance in "Cabaret" at the San Francisco Playhouse. Over the years, she has occasionally appeared in commercials such as the promotional face for Premier Bathrooms, a supplier of bathing products for the elderly and infirm.