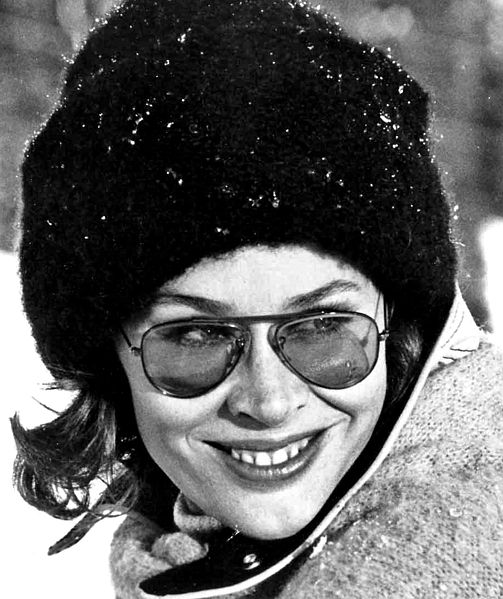 Karen Blanche Black (née Ziegler; July 1, 1939 - August 8, 2013) was an American actress, screenwriter, singer, and songwriter. She rose to prominence for her work in various independent films in the 1970s. She received numerous accolades throughout her career, including three Golden Globe Award nominations, two of which she won, as well as an Academy Award nomination for Best Supporting Actress.

A native of Illinois, Black studied acting in New York City and performed on Broadway before making her major film debut in Francis Ford Coppola's You're a Big Boy Now (1966). She followed this with roles in Easy Rider (1969), Five Easy Pieces (1970), and The Great Gatsby (1974), for the latter two of which she won Golden Globe awards for Best Supporting Actress; her performance in Five Easy Pieces also garnered her an Academy Award nomination.

In 1975, she appeared in Dan Curtis's cult horror films Trilogy of Terror and Burnt Offerings; Robert Altman's Nashville, and The Day of the Locust, which earned her a third Golden Globe nomination. Other roles include Airport 1975 (1974), Alfred Hitchcock's Family Plot (1976), Come Back to the Five and Dime, Jimmy Dean, Jimmy Dean (1982), and Tobe Hooper's Invaders from Mars (1986).

In the 1990s, Black starred in a variety of arthouse and horror films, as well as writing her own screenplays before appearing in Rob Zombie's House of 1000 Corpses (2003), which cemented her status as a cult horror icon.[1] Black continued to star in low-profile films throughout the early 2000s, as well as working as a playwright before being diagnosed with ampullary cancer in 2010. She died of the disease in Santa Monica in August 2013. Black's career spanned over 50 years, and includes nearly 200 film credits.[1]

Black was born as Karen Blanche Ziegler in Park Ridge, Illinois, in suburban Chicago, the daughter of Elsie Mary (née Reif), a writer of several prize-winning children's novels, and Norman Arthur Ziegler, an engineer and businessman.[2][3][4] Her paternal grandfather was Arthur Charles Ziegler, a classical musician and first violinist for the Chicago Symphony Orchestra.[5] She had one sister, actress Gail Brown, and a brother. Black was of German, Bohemian (Czech) and Norwegian descent.[6] The Zieglers came to the United States from Southern Germany from the area of Neukirch (Rottweil) between the Black Forest and the Swabian Jura.

She graduated from Maine Township High School East in 1957. After high school, Black enrolled at Northwestern University, where she majored in theatre arts.[7]

Black made her Broadway debut in 1965's The Playroom, which received good reviews and for which she was nominated for a Drama Circle Critic Award for Best Actress. Her film debut was in The Prime Time (1960) and her first big role was in You're a Big Boy Now (1966), directed by Francis Ford Coppola. Beginning in 1967, she appeared in guest roles in several television series, including The F.B.I., Run for Your Life, The Big Valley, The Iron Horse, The Invaders, Mannix and Adam-12.

Black played an unfaithful wife, Myrtle Wilson, in the 1974 version of The Great Gatsby, a performance that earned her a second Golden Globe Award in the same category. In the same year she starred as Nancy Pryor, the stewardess who is forced to fly the plane, in the disaster film Airport 1975 (1974).[7] In 1975, she played multiple roles in Dan Curtis's televised anthology film Trilogy of Terror. The segments, all written by suspense writer Richard Matheson, were named after the women involved in the plot — a plain college professor seemingly seduced by a handsome cad of a student ("Julie"), a pair of sisters who squabble over their father's inheritance ("Millicent and Therese"), and the lonely recipient of a cursed Zuni fetish that comes to life and pursues her relentlessly ("Amelia").[9][10]

Black received another Golden Globe nomination as Best Actress for her role as an aspiring actress in 1930s Hollywood in John Schlesinger's tragic drama The Day of the Locust (1975). She also starred as a country singer in Robert Altman's Nashville (also 1975) and as a kidnapper in Alfred Hitchcock's last film, Family Plot (1976). She reunited with director Dan Curtis to star in the horror film Burnt Offerings (1976). She played a dual role in a 1977 thriller, The Strange Possession of Mrs. Oliver. Other notable films from the 1970s include Born to Win (1971) with George Segal and Robert De Niro, Cisco Pike (1972) with Kris Kristofferson and Gene Hackman, Portnoy's Complaint (1972) with Richard Benjamin, The Pyx (1973) with Christopher Plummer, The Outfit (1973) with Robert Duvall, Rhinoceros (1974) with Gene Wilder and Zero Mostel, and Capricorn One (1978) with Elliott Gould.[citation needed]

In September 1976 Black traveled to Toronto to be a guest star on the popular variety program The Bobby Vinton Show, which aired across the United States and Canada. Black shared her singing talents performing "Lonely Now", and joined Bobby in a medley of country oldies. In 1980, Black starred in a made-for-TV movie Police Story: Confessions of a Lady Cop. In 1982, she gave a critically acclaimed performance in Robert Altman's Come Back to the Five and Dime, Jimmy Dean, Jimmy Dean, where she starred alongside Cher and Sandy Dennis. From 1984-85, she played Sheila Sheinfeld on E/R. Other television credits include Saturday Night Live, Murder, She Wrote, and Law & Order: Criminal Intent.[citation needed]

Black's later career emphasized numerous horror roles, beginning in Tobe Hooper's Invaders from Mars (1986), which she starred in with her son, Hunter Carson. As her later career progressed, Black gained a cult following, as alluded to by Family Guy television anchor Tom Tucker in his remark, "Karen Black: what an obscure reference." in the episode Death Is a Bitch (season 2, episode 6). Other horror roles included as a troubled single mother in Mirror, Mirror (1990), Children of the Night (1991), and as a paranoid mother in small-town Nebraska in Children of the Corn IV: The Gathering (1996), alongside Naomi Watts. In 1997, she played Lady Byron in the feminist science fiction feature Conceiving Ada (Dir. Lynn Hershmann Leeson), about a contemporary scientist who uses software to make contact with the Victorian pioneer of computer programming Ada Lovelace, daughter of the poet Lord Byron.[citation needed]

In 2003, Black starred as Mother Firefly in the Rob Zombie horror movie House of 1000 Corpses.[11] In March 2005, Black received the Best Actress Award at the Fantasporto International Film Festival in Porto, Portugal, for her work in the critically acclaimed Steve Balderson film Firecracker (2005), in which she played two roles, Sandra and Eleanor. She and actor John Hurt were also presented with Career Achievement Awards.

Black launched a career as a playwright in May 2007 with the opening of Missouri Waltz at the Blank Theater in Los Angeles; Black starred in the play as well. In April 2009, Black worked with director Steve Balderson for Stuck!, a homage to film noir women-in-prison dramas, which co-starred Mink Stole, Pleasant Gehman and Jane Wiedlin of The Go-Go's. She starred in John Landis's 2010 thriller Some Guy Who Kills People,[12] as well as Aïda Ruilova's surrealist short film Meet the Eye (2009). Later that year, Black appeared on Cass McCombs' song "Dreams-Come-True-Girl" from the album Catacombs.[citation needed]

The experimental hip-hop group Death Grips released a video on YouTube called "Bottomless Pit" in October 2015. The video shows footage of Black reciting lines from a film script written by the group's drummer/co-producer Zach Hill. The footage was shot in early 2013.[13]

Black was noted for her distinctive eyes, which gave her a slightly "cross-eyed" appearance,[18] although she stated in a 1982 interview that she had not been clinically diagnosed as such.[19]

After her final films were released in 2010, she was diagnosed with cancer and stopped making public appearances. She had a portion of her pancreas removed that year and endured two further operations.[20]

She was invited to attend the premiere of River Phoenix's last on-screen performance in the salvaged feature film Dark Blood, in which she had played a small part in the original early 1990s shoot. Black was unable to attend the event, held in the Netherlands in September 2012, due to her illness.[15]

On August 8, 2013, Black died at Saint John's Health Center in Santa Monica, California[20] from ampullary cancer at age 74.[21] Actress Juliette Lewis paid tribute, saying "Karen Black was my mentor and a second mother to me. She inspired everyone she came in contact with."[22]

Report a problem
Biography of Karen Black at FanPal • 2021