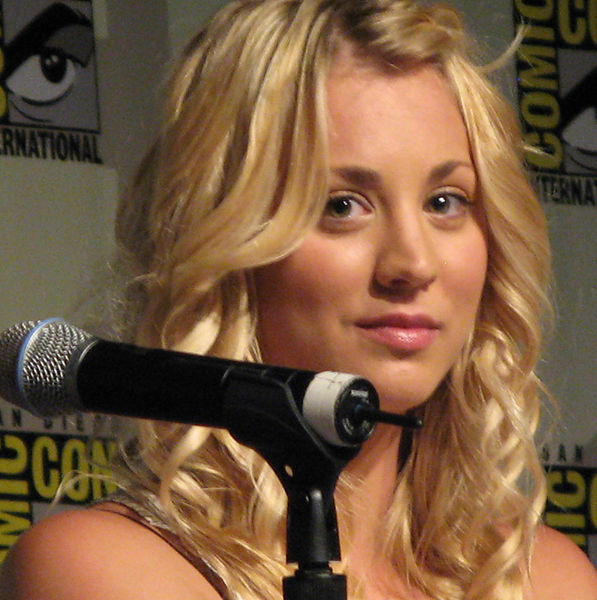 Kaley Christine Cuoco (/ˈkwoʊkoʊ/ KWOH-koh; ; born November 30, 1985)[1] is an American actress and producer. After a series of supporting film and television roles in the late 1990s, she landed her breakthrough role as Bridget Hennessy on the ABC sitcom 8 Simple Rules, on which she starred from 2002 to 2005. Thereafter, Cuoco appeared as Billie Jenkins on the final season of the television series Charmed (2005-2006). Since 2007, she has starred as Penny on the CBS sitcom The Big Bang Theory, for which she has received Satellite, Critics' Choice, and People's Choice Awards. Cuoco's film work includes roles in To Be Fat like Me (2007), Hop (2011) and Authors Anonymous (2014). She received a star on the Hollywood Walk of Fame in 2014.[2] In October 2017, Cuoco founded Yes, Norman Productions.

Cuoco was born in Camarillo, California, the elder daughter of Layne Ann (Wingate), a homemaker, and Gary Carmine Cuoco, a realtor.[3] Her father is of Italian descent while her mother is of English and German ancestry.[4] Her sister, Briana, competed on the fifth season of The Voice. As a child, Cuoco was a regionally ranked amateur tennis player,[5] a sport she took up when she was 3 years old. She stopped playing at the age of 16.[6]
Read more...

Cuoco made her first feature film appearance as the young Karin Carter in the 1995 action thriller Virtuosity.[7] From 2000 to 2001, Cuoco appeared on the CBS sitcom Ladies Man and in 2000 she portrayed former The Brady Bunch star Maureen McCormick in the TV movie Growing Up Brady as well as starring in the Disney Channel original film Alley Cats Strike. In September 2002, Cuoco began a starring role as Bridget Hennessy on the ABC sitcom 8 Simple Rules. Bridget was the oldest child, despite Cuoco being six years younger than Amy Davidson, who played her younger sister. Because of low ratings, ABC canceled the series on May 17, 2005.

Cuoco at the San Diego Comic-Con in July 2009

In addition to the final season of 8 Simple Rules, Cuoco had starring roles on the NBC miniseries 10.5, the ABC Family original movie Crimes of Fashion, the independent film Debating Robert Lee,[8] and in the film The Hollow at the same time. She also voiced the character of Brandy Harrington, a 14-year-old anthropomorphic mixed-breed dog, on the Disney Channel cartoon Brandy and Mr. Whiskers. Cuoco voiced the character of Kirstee Smith in Bratz from 2004 to 2005. In the eighth season of the TV show Charmed, Cuoco appeared as Billie Jenkins, a powerful young witch with the powers of telekinesis and projection. Executive producer Brad Kern stated that Cuoco's character was initially brought in as a possible spin-off.

In September 2007, Cuoco began starring in the CBS sitcom The Big Bang Theory, playing Penny, a Cheesecake Factory employee and aspiring actress who lives across the hall from physicists Dr. Leonard Hofstadter and Dr. Sheldon Cooper. Prior to the 2010-2011 season, she earned $60,000 an episode for the series, the same as her co-stars. In 2010, the cast negotiated a raise for each actor to make $200,000 per episode.[9] On September 13, 2010, she broke her leg in a horse-riding accident and missed two episodes of the series.[10] In late October 2012, Cuoco enlisted the help of her sister Briana to organize a flash mob on the set of the show, in which she and the cast and crew surprised the studio audience by suddenly lip syncing and dancing to Carly Rae Jepsen's song "Call Me Maybe". A video of the event was posted on YouTube and became a viral success.[11][12] A clip from the performance was also played during Cuoco's January 8, 2013 appearance on the late night talk show Conan.[13] As of August 2014, Cuoco and her co-stars from The Big Bang Theory Johnny Galecki and Jim Parsons, each earn an estimated $1 million per episode.[14]

Cuoco at PaleyFest in March 2013

Cuoco starred in the Lifetime film To Be Fat like Me, which premiered on January 8, 2007.[15] She played a minor role in the Prison Break episodes "The Message" and "Chicago", as well as starring in the comedy horror spoof Killer Movie in 2008. She also appeared in the 2010 film The Penthouse. In 2011, Cuoco appeared in Allure magazine's annual "Naked Truth" feature.[16] That same year, she appeared in the films Hop and The Last Ride.[17] She was also chosen to host the Teen Choice Awards in 2011,[18] as well as the People's Choice Awards in 2012 and 2013.[19][20] Cuoco is a regular on Priceline.com commercials as the daughter of William Shatner's character.[21]

In October 2017, Cuoco founded Yes, Norman Productions, a film and television production company which entered an exclusive multi-year first look production deal with Warner Bros. Television. The company optioned the rights to The Flight Attendant, a book written by author Chris Bohjalian, which will be developed into an limited series, with Cuoco to star and executive produce.[22]

While working on The Big Bang Theory, Cuoco privately dated co-star Johnny Galecki for roughly two years until December 2009, while their characters on the show were also dating. She told CBS Watch in September 2010 that they have remained on good terms since ending their relationship.[23] She became engaged to addiction specialist Josh Resnik in October 2011, but they ended their engagement by March 2012.[24]

Cuoco subsequently became engaged to professional tennis player Ryan Sweeting in September 2013, after three months of dating. They married on December 31, 2013, in Santa Susana, California.[25] On September 25, 2015, it was announced that she and Sweeting had decided to divorce.[26] The divorce was finalized in May 2016.[27]

Cuoco received significant media attention surrounding a remark she made in an interview with Redbook magazine while married to Ryan Sweeting. When asked if she considered herself a feminist, Cuoco responded:

Is it bad if I say no? I was never that feminist girl demanding equality, but maybe that's because I've never really faced inequality... I cook for Ryan five nights a week: it makes me feel like a housewife. I love that. I know it sounds old-fashioned, but I like the idea of women taking care of their men.[28][29]

In subsequent interviews, Cuoco has apologized for and retracted these statements, telling Cosmopolitan magazine, "of course I'm a fucking feminist. Look at me. I bleed feminism."[30][31]