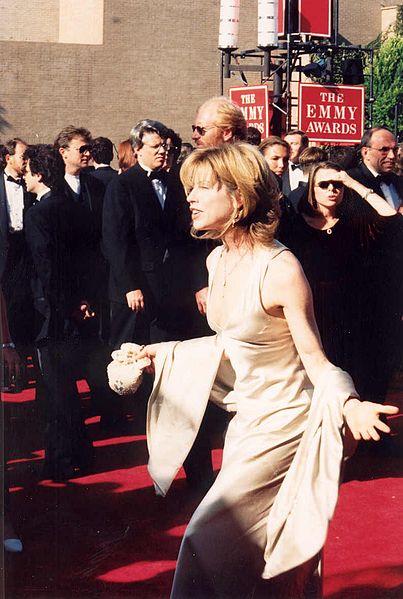 Julianne Phillips (born May 6, 1960[1]) is an American model and actress. She first attracted attention for being the first wife of Bruce Springsteen. She is also known for her portrayal of Francesca "Frankie" Reed on the television drama series Sisters (1991-96).

Phillips was born in Evanston, Illinois[2][3] and raised in Lake Oswego, Oregon. Her parents are William Phillips, an insurance broker and executive, and his wife, Ann, who raised their children in the Catholic faith.[1] Phillips is a graduate of Lake Oswego High School and Brooks College in Long Beach.[4] She has five siblings: four older brothers and one older sister. She credits her father with getting her into acting and giving her encouragement.[5]
Read more...

Phillips began work as a model in Manhattan in the early 1980s. By 1982, she was represented by the Elite Modeling Agency, which characterized her as a "perfect ten package," earning as much as $2,000 a day.[1] She then moved to Los Angeles, where she appeared in a .38 Special music video. This led to Phillips' first notable acting roles, in 1984's made-for-TV movies Summer Fantasy and the Robert Urich vehicle His Mistress.[1] She also appears at the end of then-husband Bruce Springsteen's music video "Glory Days".[3]

Phillips ultimately became best known for being the girlfriend, and later the first wife, of musician Bruce Springsteen. The two met in October 1984, and they were married in her native Lake Oswego shortly after midnight on Monday, May 13, 1985, surrounded by intense media attention.[1][6][7][8] Citing irreconcilable differences, she filed for divorce in August 1988,[9] which was finalized the following March.[10][11]

Phillips continued her acting career during and after the marriage. She appeared in Odd Jobs (1986), Sweet Lies (1988), and Seven Hours to Judgment (1988), and starred opposite Chevy Chase in Fletch Lives and John Ritter in Skin Deep, both in 1989.

Two years later, she began the role of Frankie Reed, the business-oriented character on Sisters; it became her best-known role. She left the show at the end of its fifth season in 1995, but returned for its final episode in 1996. She then briefly returned to movies, appearing in Big Bully (1996), Colin Fitz Lives! (1997), Allie & Me (1997), and the made-for-TV disaster film Tidal Wave: No Escape (1997).[12]

Phillips has not acted since 1997. She briefly returned to the public in 2001, when she was interviewed on an episode of the biographical documentary series Intimate Portrait that profiled her Sisters co-star Sela Ward.[13]

In 2014, Phillips returned to the public again when she was reunited with former Sisters co-stars Ward, Swoosie Kurtz, and Patricia Kalember for a special edition issue of Entertainment Weekly. The reunion was documented on the NBC morning news program Today.[14]