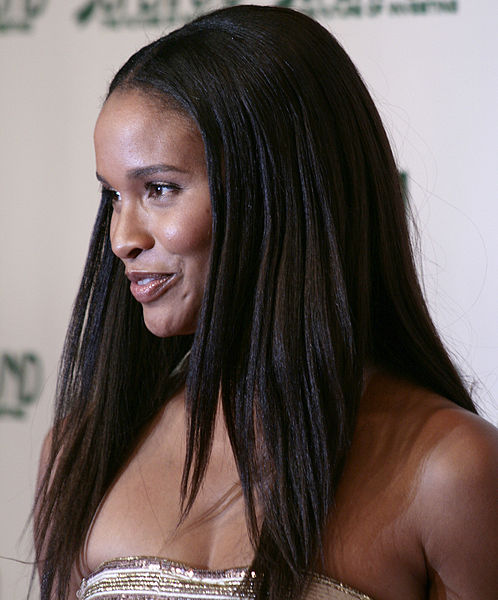 Joy Bryant (born October 18, 1974) is an American actress and former fashion model. She has appeared in numerous films and television since beginning her acting career in 2001. Her accolades include two NAACP Image Award nominations, and one Screen Actors Guild Award nomination.

Born and raised in the Bronx, New York City, Bryant was a gifted student and earned a scholarship to Yale University after high school. She began modeling in the mid-1990s after graduating from college, appearing in advertisements for Ralph Lauren, Tommy Hilfiger, Gap, and Victoria's Secret. She made her film debut in 2001's Carmen: A Hip Hopera.

Bryant had her breakthrough after being cast by Denzel Washington in his biographical drama film Antwone Fisher (2002), in which she played a U.S. Navy sailor. This was followed by a recurring guest role on the NBC series ER. Her subsequent film credits include the horror film The Skeleton Key and the drama Get Rich or Die Tryin' (both 2005), and the historical drama Bobby (2006).

In 2010, Bryant was cast in the role of Jasmine Trussell in the NBC family drama Parenthood, a role she portrayed for the series' entire six seasons before its finale in 2015. She has also appeared on television in guest roles on the series Girls (2017) and Ballers (2018).

Bryant was born in the Bronx, New York to Joyce Bryant.[2] She was raised by her grandmother,[3] who helped support her on welfare.[4] She explained: "I grew up not really having a connection to my father."[5] She started dancing at age three.[6] Bryant would later reveal that she was conceived from a sexual assault against her mother, who was fifteen years old at the time of her birth, by an older adult male.[2] Bryant stated: " gave birth to me, not in love but in shame, after hiding her pregnancy from my grandmother for six months."[2]

She described herself as a "nerd" growing up: "I read encyclopedias all day and watched TV. My grandmother, who raised me, emphasized the importance of education. For me it was about being self-sufficient and using my brain."[4] While living in the Bronx, she graduated from CJHS 145x and was a member of the Fieldston Enrichment Program, an elite high school preparatory program.[7] Bryant is a graduate of Westminster School, a boarding school in Simsbury, Connecticut.[3] After graduating from Westminster, Bryant was accepted to Yale University, where she studied for two years before dropping out to pursue a modeling career.[8]

Bryant at the 2009 Metropolitan Opera

Early on, Bryant played a small role in Ill Al Skratch's video "I'll Take Her". Bryant had modeling contracts with several brands, including Ralph Lauren, Tommy Hilfiger and RocaWear.[9] She has also appeared in advertising for Gap and Victoria's Secret, and also starred in a Carlos Santana and Musiq Soulschild music video for the song "Nothing at All" opposite Connecticut born actor Andre Warmsley in 2004.

Her acting debut came in 2001 in Robert Townsend's Carmen: A Hip Hopera, in which she portrayed a fortune teller opposite Beyoncé and Rah Digga.[10] After a small role in the action comedy Showtime, she made her big breakthrough in Denzel Washington's directorial debut, Antwone Fisher.[11] In 2003, she co-starred in the Mario Van Peebles biopic Baadasssss!,[12] followed by a recurring guest role on the drama series ER.[13]

In 2005, she appeared in several high-profile films, including the horror filmThe Skeleton Key[14] and the drama films London and Get Rich or Die Tryin', in the latter of which she played the childhood sweetheart of 50 Cent.[15] In 2007, she had a minor part in the thriller film The Hunting Party starring Richard Gere and Terrence Howard,[16] followed by a leading role in the ensemble comedy Welcome Home Roscoe Jenkins (2008).[17] She also played the role of Tunde Adebimpe's love interest in "Will Do" a 2011 TV on the Radio music video.

From 2009—15, Bryant starred as Jasmine Trussell in Parenthood. BuddyTV ranked her #19 on its TV's 100 Sexiest Women of 2011 list.[18] Also in 2015, she had a guest-starring role as Erica Kincaid, a doctor, on the series Rosewood.[19] In 2017, she had a guest-starring role on the HBO series Girls.[20] The following year, Bryant was cast in a recurring role on the sports drama series Ballers, playing a successful public defender and mother of a rising football star.[21]

In October 2007 OK! reported that Bryant was engaged to stuntman Dave Pope, who she met on the set of Welcome Home Roscoe Jenkins.[22] They married on June 28, 2008 in the Hamptons.[23] She owns a ranch house in Glendale, California.[3] She is an ambassador of Oxfam's Sisters on the Planet, an organization that helps women fight hunger, poverty and climate change.[24] As of 2014, Bryant resided with her husband in Glendale.[25]

Report a problem
Write to Joy Bryant at FanPal • 2020