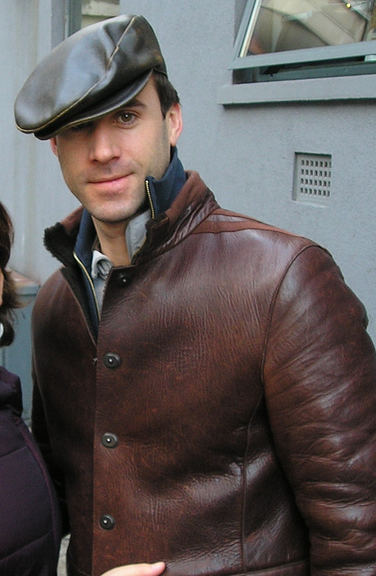 Joseph Alberic Twisleton-Wykeham-Fiennes[1] (/faɪnz/; born 27 May 1970) is an English film and stage actor.

He is known for his portrayals of William Shakespeare in Shakespeare in Love (1998), for which he was nominated for the BAFTA Award for Best Actor in a Leading Role and the Screen Actors Guild Award for Outstanding Performance by a Male Actor in a Leading Role, Sir Robert Dudley in Elizabeth (1998), Commisar Danilov in Enemy at the Gates (2001), and Monsignor Timothy Howard in the second season of the TV series American Horror Story (2012-2013). His role in the 2017 TV drama series The Handmaid's Tale was nominated for the Primetime Emmy Award for Outstanding Supporting Actor in a Drama Series.

Fiennes was born in 1970 in Salisbury, England, the son of Mark Fiennes (1933-2004), a farmer and photographer, and Jennifer Lash (1938-1993), a writer.[2] He has English, Irish, and Scottish ancestry.[3][4] His surname comes from the French village of Fiennes, Pas-de-Calais. His grandfathers were industrialist Sir Maurice Fiennes (1907-1994) and Brigadier Henry Alleyne Lash.

Fiennes is an eighth cousin of Charles, Prince of Wales,[5] and a third cousin of adventurer Ranulph Fiennes and author William Fiennes.[6]

Fiennes was briefly educated in the Republic of Ireland, then at Swan School For Boys (now known as Leehurst Swan School, following a merger with another school), an independent school in Salisbury, before passing his 11+ exam and continuing to Bishop Wordsworth's School, a voluntary-aided state day grammar school, in the Cathedral Close of the city. He then attended art school in Suffolk for a year, before joining the Young Vic Youth Theatre. Fiennes subsequently trained for three years at London's Guildhall School of Music and Drama, graduating in 1993.[7]

His first professional stage appearance was in the West End in The Woman in Black, followed by A Month in the Country opposite Helen Mirren. Fiennes then became a member of the Royal Shakespeare Company for two seasons.

He made his television debut as Willy in The Vacillations of Poppy Carew. His first feature film was 1996's Stealing Beauty, co-starring Liv Tyler. In 1998, Fiennes appeared in two films that were nominated at the Academy Awards: he played Robert Dudley opposite Cate Blanchett in Elizabeth and he portrayed William Shakespeare opposite Gwyneth Paltrow in Shakespeare in Love, receiving nominations for the BAFTA Award for Best Actor in a Leading Role and the Screen Actors Guild Award for Outstanding Performance by a Male Actor in a Leading Role, which won the Academy Award for Best Picture. He and Paltrow were reunited onscreen in Running with Scissors (2006).

In 2001 he appeared in the film Enemy at the Gates. In 2002 he starred in the independent film, Killing Me Softly.

In 2003 he lent his voice as Proteus in the DreamWorks animated film Sinbad: Legend of the Seven Seas opposite Brad Pitt. The same year he starred in the limited-release film Luther, playing Martin Luther, and he also appeared in The Merchant of Venice, in which he portrayed Bassanio. Fiennes returned to the theatre in 2006 to perform in the one-man play Unicorns, Almost about World War II poet Keith Douglas at the Old Vic.

In 2006, he appeared in the films The Darwin Awards and Goodbye Bafana. Goodbye Bafana was filmed by director Bille August in South Africa, and released in 2007. Fiennes portrayed James Gregory, author of the book Goodbye Bafana: Nelson Mandela, My Prisoner, My Friend.

Fiennes starred in the ABC science fiction series FlashForward, which debuted on 24 September 2009 and ran through 27 May 2010, as Mark Benford.[8] Fiennes starred in Starz's 10-part series, Camelot, as the wizard Merlin.[9]

In the second season of American Horror Story, which premiered in October 2012, Fiennes played the role of Monsignor Timothy Howard. Fiennes can be seen currently on the Hulu original series The Handmaid's Tale (TV series).

Fiennes married María Dolores Diéguez, a Swiss model of Spanish origin, in a Roman Catholic ceremony in Tuscany in August 2009.[10] They have two daughters.

Fiennes was one of the celebrities, including Tom Hiddleston, Jo Brand, E. L. James and Rachel Riley, to design and sign his own card for the UK-based charity Thomas Coram Foundation for Children. The cards were auctioned off on eBay during May 2014.[11]

Other projects and contributions

Report a problem
Write to Joseph Fiennes at FanPal • 2021